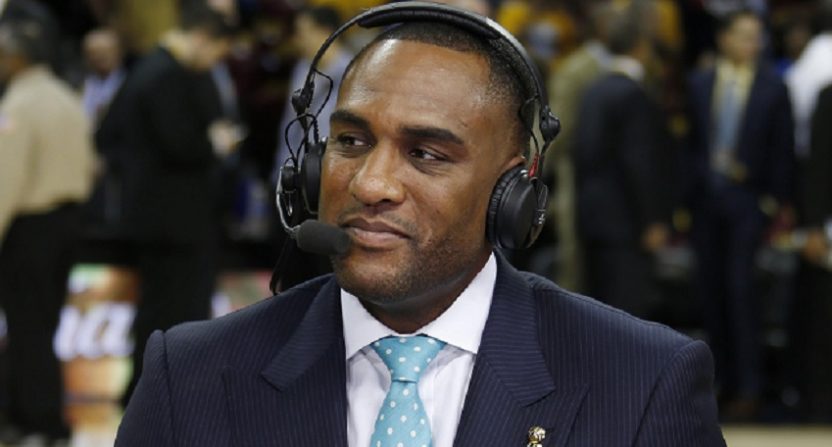 Turner Sports and NBATV analyst Steve Smith spoke with The Comeback on Wednesday to discuss a variety of topics from the NBA’s conference finals.

Among the subjects of the conversation were Kyrie Irving’s masterful performance in Game 4 of the Eastern Conference Finals, Smith’s strong stance on the Atlanta Hawks’ general manager position recently filled by Travis Schlenk and his memories of former San Antonio Spurs teammate Manu Ginobili.

Here is the full interview:

Smith first broke down Irving’s 42-point game on Tuesday night, which the Cleveland Cavaliers needed after LeBron James committed four fouls in the first half.

“He’s just one of those players that’s fantastic in clutch situations. And obviously that was very clutch for the Cleveland Cavaliers,” he said. “He is a special, special special player.”

As for Game 4 itself, Smith thought it was a nice change to have a close, contested game at this stage of the conference finals.

“We had a little drama in the series, where we got a chance to watch and have something to talk about… I like that they competed and they gave us a game, and gave us a series even if they still end up losing 4-1.”

A former All-Star with the Atlanta Hawks, Smith told a local radio station (via the Atlanta Journal Constitution) that the Hawks should at least try to look at former players for its front office openings, something the team did not do in their general manager search.

“I played here, I live here, I’ve been around here, and I just thought over the years, over the different ownerships, they haven’t really done a great job of looking within,” Smith said. “That’s not saying you have to hire a former Hawk, but I just think (and the list goes on) there’s a lot of former Hawks that are definitely qualified that I would’ve loved to see them just in the mix.”

Moving on to the Western Conference Finals sweep by Golden State over San Antonio, Smith wondered what would’ve happened had Kawhi Leonard stayed healthy and the Spurs took Game 1 on the road.

“The way they came out in those first three quarters, Pop and that group, with a healthy Kawhi, I just think they would’ve given the Golden State Warriors a run for their money, whether it would’ve been 4-1, 4-2,” he said. “I don’t think it goes seven games, but I just think winning that first game, it would’ve changed the whole dynamic.”

And finally, Smith spoke about Manu Ginobili, who was his teammate when Manu was a rookie during the Spurs’ championship season of 2002-2003.