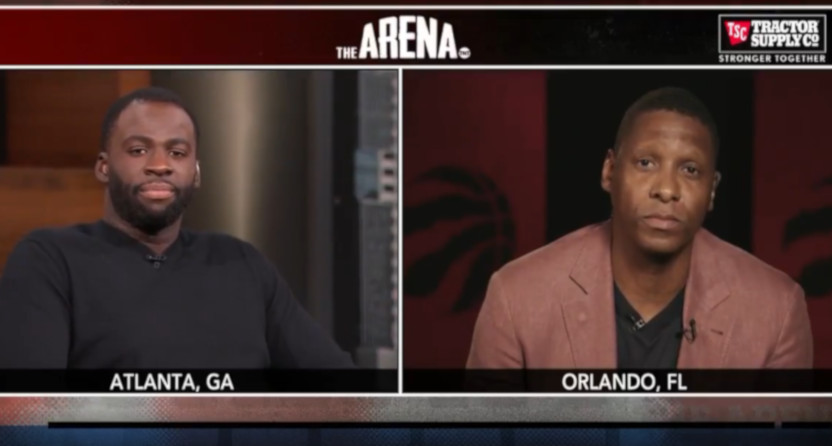 One of the most remarkably thoughtless comments in a while on an NBA studio show came from Draymond Green on TNT Thursday. Green is part of TNT’s The Arena, which has him, Dwyane Wade, Cari Champion, and frequent Green feud target Charles Barkley discussing “the league and current events.” And, for some reason, Green (seen at left above) chose to use that platform to question the Toronto Raptors painting their buses with “Black Lives Matter,” starting a question to Raptors’ general manager Masai Ujuri (seen at right above) with “as a Canadian team, it doesn’t directly impact your team because you’re in an entirely different country.”

"We said we were going to use the bubble as a statement." #WeTheNorth | @NBAonTNT pic.twitter.com/mjsaRWgZuD

“You guys have on your bus ‘Black Lives Matter’ and as a Canadian team, it doesn’t directly impact your team because you’re in an entirely different country. What made you guys take the stand and put it on your bus — I think one of 22 teams that actually went through with it — where did the idea come from and why did you guys feel the need to push that through?”

Yeah, that’s a question, all right. And this led to Chris Boucher, a Black Canadian on the Raptors’ roster, calling out Green’s ignorance on racial issues in Canada:

Hold on man So for all Black Canadian Mans it doesn’t directly affect Us ?? Aren’t we all fighting for the same thing… Rascism is everywhere @Money23Green I respect you but We Go through our battles too https://t.co/28jZjbuF11

And it led to a lot of further Twitter criticism, including this one:

To his credit, Ujiri rolled with this dumb question very well, saying “For us, we said we were going to use the bubble as a statement. We said we’re going to use this place as a platform,” and “We wanted to show people that as we come in, not just the Toronto Raptors, we represent the NBA. That there’s something on the minds of all the players and all the teams.” But beyond that, there is a substantial history of racism in Canada, including racism against Black people, and that is both ancient and recent. Black Lives Matter protests against racist policing policies have absolutely been prominent in Canada, including in Toronto.

And the Black players on the Raptors, whether Canadian or American, absolutely still have to deal with racism. Suggesting they’re not affected because they happen to be in a different country is incredibly naive and foolish. Sure, some of the specific challenges may be different across the U.S.-Canada border, but many of the issues are quite similar. And while Canada has been more welcoming than the U.S. to Black athletes in some specific circumstances, many Black athletes in Canada have discussed how they’ve still faced plenty of issues there. It’s far from a “it doesn’t directly impact your team” situation.

And it’s perhaps particularly galling for Green to throw this out in an interview with Ujiri; Ujiri is Nigerian-Canadian, and he wound up in a policing controversy himself during the 2019 NBA Finals at Oracle Arena, then the home of Green’s Warriors, with a Alameda County sheriff’s deputy trying to stop Ujiri from getting on the court after the Raptors’ win and then claiming Ujiri “pushed and struck” him. (No criminal charges were filed, but the deputy in question filed a civil lawsuit against Ujiri in February.) So even beyond the vast and deep history of racism in Canada, Ujiri is personally well aware of the issues involved with complaints about racism in policing.

This is also a clip that raises questions about the long discussions about how “Draymond Green will make the perfect successor to Charles Barkley one day,” the specific title of a 2018 piece from then-AA writer Alex Putterman. Yes, that’s long been talked about, and that piece in particular germinated from a tweet from Tim Bontemps (then with The Washington Post, now with ESPN) about Green as a possible successor to Barkley.

But Green has really done very little since then to suggest he’s a valuable TV presence, and many of the media stories around him have been about him picking fights with the media for various reasons. Turner obviously thought there was some value in adding him to The Arena (and he’s available because the Warriors went 15-50 this season, last in the Western Conference, and didn’t make the cut for the Orlando Bubble), but he hasn’t shown much of that so far. And this particularly ignorant comment about race and Canada (to someone who has had to endure plenty of racism, no less) isn’t exactly a glowing reason to give Green more TV time.