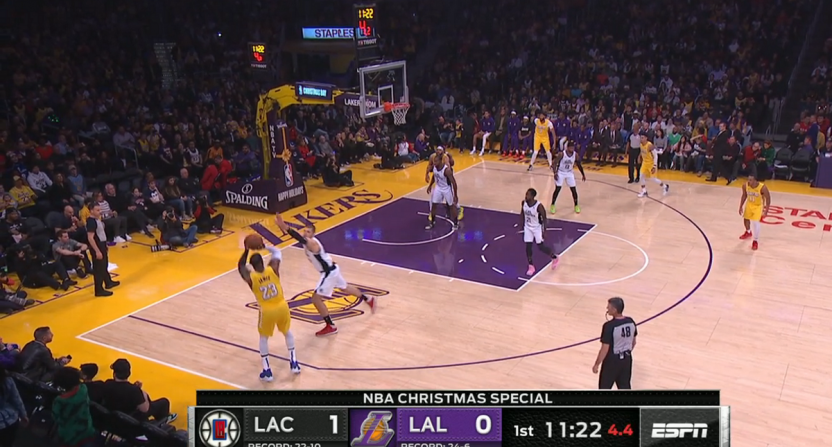 A lot of NBA fans (or people with even a passing interest in sports and a strong desire to have something to do beyond talking to extended family members) have been waiting all Christmas Day for Clippers-Lakers.

After a reasonable build-up (it was lengthy and maybe slightly over the top, but it’s hard to not be excited for this particular game, given the players, personalities, and stakes involved.) Then, after the opening tip, viewers were treated to the game unfolding not from the traditional broadcast angle, but instead from a swaying, zooming camera perspective.

That was the main angle for the first two minutes of the contest, and it returned sporadically throughout the first half as well.

Predictably, this drew some attention:

why does this look like the 2k camera angle i always have to change pic.twitter.com/jiLhcwloL9

That wasn’t the only video game camera angle ESPN (on ABC) went with, though. There was also this top-down, end-to-end view, which was even more disorienting:

ESPN utilizing an array of camera angles for tonight’s game. This one seems to be drawing the biggest reaction. pic.twitter.com/v60zvUqEnd

The whole thing was incredibly disorienting. The constant back-and-forth movement from the low perspective was especially tough at times.

this camera angle is awesome i love crippling nausea

Even the standard shot of the broadcast crew to set up the second half action was tweaked:

The main question is simple: why? Why would a network choose the most highly-anticipated game of the season (which is both their own words and probably the truth) to trot out a few camera angles that we never, ever see?

There’s an obvious answer here: the people in charge of these choices view the bigger stage as the reason to do things like this. Different, showy angles are designed to make it feel like a special occasion, with things like the low, pseudo-Skycam moving up and down the sideline an effort to bring viewers closer to the game. What networks rarely account for, though, is how jarring it can be for viewers to have to follow the action from angles they’re not used to. What’s supposed to make viewers feel closer to the action ends up taking them out of it entirely.

Plus, there’s an argument that camera choices like these are adding very little as it is. Occasionally SkyCam-style shots can be very rewarding, as we’ve seen on multiple kick return touchdowns this football season. But for basketball, the traditional broadcast angle works for a reason. It features limited movement as the action changes ends, while being close enough for viewers to see details like fouls or whether or not a player has a toe on a line while being zoomed out enough to see the entire half-court; if you want to see any off-ball activity, you can do so as you please.

That’s an advantage basketball has over other team sports, from the broadcast perspective. Football, soccer, and baseball all feature, to some degree, live-action taking place off the screen. It occasionally happens in basketball as well, of course, but the occasions where meaningful things happen off camera are few. Both of them had an effect on depth perception, making it harder to follow what was happening, or to predict what was happening next.

The low sideline angle hurt the ability to judge spacing on the court, especially for action on the far side of the court. The top-down view was even more jarring, especially for possession changes, as it swung around the screen. The effect was both dizzying and displacing; the NBA game moves so fast that the shot would lose players as they ran out of frame, leaving us to be surprised by where players were by the time the pivot ended. Then, with some action typically already happening in the set, we would be treated to a few seconds of a possession before doing it all over again. And even at its most static, that view flattens out an incredibly three-dimensional sport.

It’s undeniably cool that ESPN can give us these angles, and for things like replays or analytical segments, they can be very valuable. Even using it to experiment during less important contests might be interesting. But the overall effect just isn’t worth it, not yet, and especially not during a game like this.