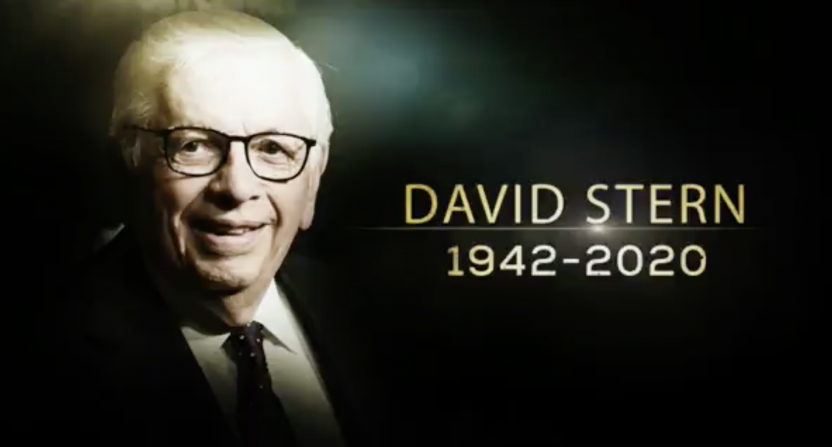 After being hospitalized for suffering a brain hemorrhage on December 17, it was reported that former NBA commissioner David Stern has passed away on New Year’s Day at the age of 77. Stern’s legacy is one that transformed the NBA to an international game and opened doors for so many, including the WNBA. When Stern took over in 1984, it was a regional league in the eyes of many, including TV networks. Now, the NBA is arguably the second biggest league in the United States to the NFL.

As the news came out about Stern’s death, many within the sport paid tribute to the former commissioner. Stern may have ruffled more than a few feathers throughout his tenure but he had the respect from all and these are just some of the many tributes already being paid to the commissioner.

David Stern was such a history maker. When I announced in 1991 I had HIV, people thought they could get the virus from shaking my hand. When David allowed me to play in the 1992 All Star Game in Orlando and then play for the Olympic Dream Team, we were able to change the world.

Magic Johnson. Larry Bird. David Stern. One of the three most important figures in the history of the sport. #RIP https://t.co/np7p7SpPNY

David Stern has passed away. Hard to imagine an NBA without David — a giant among giants. RIP. Adam Silver’s statement: pic.twitter.com/tycbrAuZr9

His unwavering belief in his vision helped pull the league from the ashes and elevate it to where it stands and flourishes today.

A brilliant man of conviction and purpose.

RIP David Stern. This is super sad news. Praying for his family and loved ones. David was a legend who I came to know very well during my time in the league and after. The @nba wouldn’t be what it is today without him. #ripdavidstern 🙏🏾🙏🏾🙏🏾 https://t.co/bgfYzeY5Zt

RIP to former NBA Commissioner David Stern, who presided over unprecedented global growth of the NBA and basketball for 30 years. Precious few have had comparable impact upon the game. Sad news for the world basketball community. pic.twitter.com/8OF1UybTA0

RIP David Stern. He helped grow the game to what it is today. The draft lottery and the Dream Team really kick started all the growth we’ve seen since. https://t.co/SEVHunj0wh

Rest in peace, David Stern. Stern helped save the NBA. The league and the sports world as a whole wouldn't be what it is today without him—his impact is immeasurable. History will remember him as one of the greats.

There is no way to encapsulate David Stern's impact on sports — and issues beyond sports — into a tweet. Rest in peace to the once and forever commissioner.

So sad! RIP! The NBA wouldn’t be what it is today if it wasn’t for that man! 🙏🏽 #DavidStern https://t.co/cWn91fiSeY

In 1984, David Stern inherited an NBA that broadcast its playoff games on tape delay.

Now, the NBA Finals reach fans live in 215 countries and the average franchise is worth $1.9 billion.

It is impossible to overstate his impact on the American sports landscape.

Such sad news from the NBA – former commissioner David Stern, 77, has passed away after suffering brain hemorrhage three weeks ago. All of us owe Stern such a debt – he made American pro sports a more exhilarating, more inclusive, more fun place to be. He will be missed. pic.twitter.com/u8uAvJotIH

I truly wish I didn’t have to post this. The NBA has announced that former commissioner David Stern passed away today. I’m saddened more than I can possibly express. pic.twitter.com/XyTJMSlDYB

We lost an icon of our sport today with the passing of Commissioner Emeritus David Stern. David was a visionary and innovator in every sense of the language, and the success of our league today is a reflection of his leadership.

We extend our thoughts & prayers to his family. pic.twitter.com/qk7NvRvdmH

I am truly saddened to hear that David Stern has died. He helped transform a sleeping giant of a sport into a global force. Even better, he was an anti-stuffed shirt commissioner, a guy you could joke and have fun with.

I am absolutely crushed at the loss of my friend #DavidStern
We owe so much to this man @nba @wnba @nbadleague family please pray for his loved ones. David was a giant in sports#missyoualready #heartbroken https://t.co/NvvvTKh2zF

The two most important people in the history of the game of basketball are Dr James Naismith and DAVID STERN. One man created the game and the other made it what it is today. RIP David, so many owe you so much!