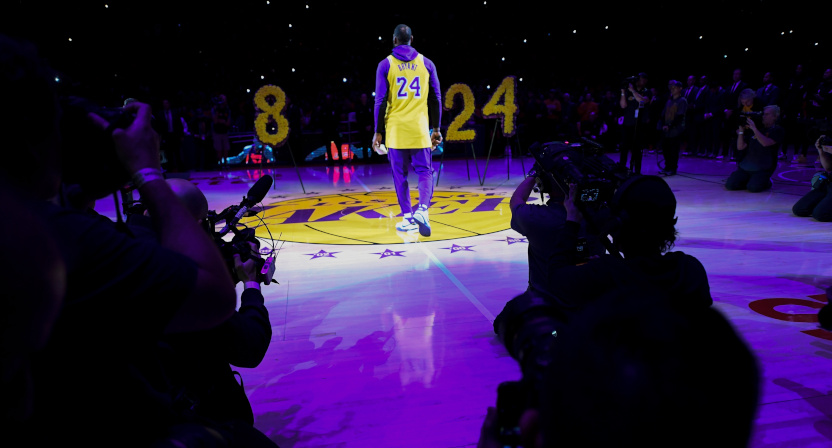 The Portland Trail Blazers-Los Angeles Lakers clash Friday was notable as the Lakers’ first game since Kobe Bryant’s death the previous Sunday, and a ton of people tuned into watch it. Mitch Metcalf of ShowBuzzDaily reported that the game averaged 4.41 million viewers and drew a 2.01 rating in the key adults 18-49 demographic. That marked the highest rating in that demographic on cable that night and the second-highest viewership (behind only Fox News’ Hannity, with 4.50 million viewers, but just a 0.34 in that demographic).That key demo rating also beat all of broadcast television that night. The best there was a 0.7, for CBS’ Hawaii Five-0 and Magnum P.I. and Fox’s WWE Smackdown. And Blazers-Lakers was also ahead of everything but CBS’ procedurals (Hawaii Five-0, Magnum P.I., and Blue Bloods) in viewership. As Paulsen wrote at Sports Media Watch, too, it wound up as the second-largest viewership number ever for a regular-season NBA game on ESPN:

The Nielsen measurement here began at 10 p.m. Eastern, so it included the entire half-hour pregame ceremony in tribute to Bryant. And that probably helped boost the numbers a bit. But it’s still amazing to see a game starting this late on the East Coast (granted, on a Friday, but still) pull in these kind of number. That’s especially true when you consider that NBA ratings in general have been struggling this season (and also last season).That goes to show the widespread interest in tributes to Bryant. Even a rebroadcast of Bryant’s final game (an April 2016 game against the Utah Jazz) Monday on ESPN drew 1.09 million viewers and was the day’s most-watched sports program, beating out its lead-in (live college basketball between North Carolina and NC State, 1.01 million) and several national NBA broadcasts this year (including Clippers-Heat on ESPN three days earlier). So it makes sense that there was so much interest in this game, especially with ESPN promoting it all day and doing live shows on location from the LA Live plaza (a two-hour special edition of The Jump at 3 p.m. Eastern and NBA Countdown at 7 p.m. Eastern on ESPN leading into the Dallas Mavericks-Houston Rockets game, plus more Countdown at 9 p.m. on ESPN2 to set up the Blazers-Lakers game).This is one game under very unique circumstances, so this certainly isn’t an indication that NBA ratings are rebounding overall. But it’s still one heck of a notable ratings number. And it goes to show just how many people were paying attention to this Blazers-Lakers game. In mid-December, ESPN was averaging 1.5 million viewers per game this season (down 16 percent year over year), and Mavericks-Rockets earlier Friday also pulled in 1.53 million viewers. So this one game almost tripled those audiences, and it served as the second-most watched NBA regular-season game ever on ESPN. That’s pretty remarkable, and it illustrates just how big of a deal the Lakers’ first game after Bryant’s passing was.[Sports Media Watch]