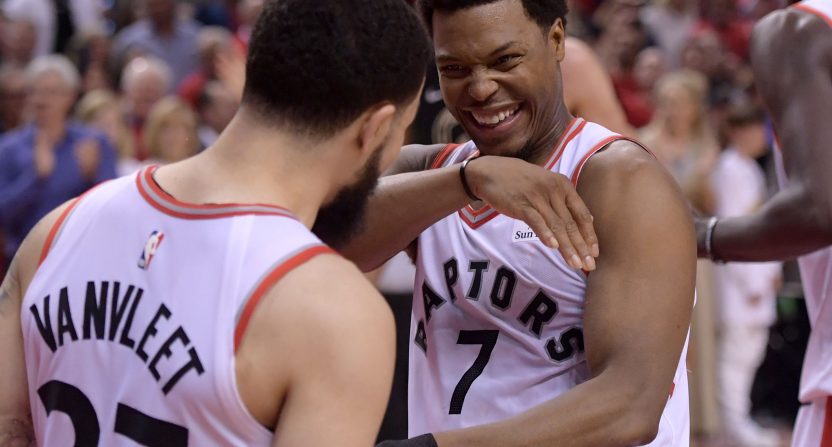 Just when basketball fans in Ontario and the whole of Canada thought the NBA playoffs had come to an end for their representative, the Toronto Raptors continue to rise and keep their slim chance of progressing further alive!

Indeed, after the first three games against the Philadelphia 76ers, many would have been ready to see the Toronto-based organization’s NBA season come to an end as they were 3-0 and looked far from being anywhere close to even challenging to remain in the tournament.

In fact, many would have perhaps been banking on the idea that the 76ers would have completed a clean sweep and taken the series 4-0 given the previous three performances on the court, however Nick Nurse and his team clearly still have the heart and desire to compete and make sure their fans have something to cheer about, including superfan Nav Bhatia.

Game 4 was played in front of a home crowd at the Scotiabank Arena and perhaps that had helped the team to turn things around, as it seems to have given them some confidence moving forward as they were able to win Game 5, too!

The possibility of a Game 6 looked incredibly unlikely and even unrealistic for Ontarians, and the rest of Canada, but that is where we are today, as the Raptors will be looking to take it to Game 7 and a winner-takes-all scenario when they meet in Game 6 on April 28!

The story so far

As mentioned, Nurse’s franchise certainly did not look as though they were ever going to be in the NBA playoffs for that much longer following their first three games in this series, however the team has clearly railed in the face of adversity and appears to be thriving when the pressure is really on.

This is how the first three games had ended:

Perhaps there was always a possibility of the Raptors coming back into the series following the tight defeat in Game 3, although not many would have been able to foresee that there would be two significant wins on the bounce, especially with Game 5 being a road win where the team has been dreadful recently.

We got a series 😤 pic.twitter.com/jpPeEVkWXY

This is how those two games ended:

As highlighted previously, Game 6 will be played at the Scotiabank Arena on April 28, and if the Raptors win, they will take the series to a winner-takes-all contest, whereas a win for the 76ers in front of a Canadian crowd will end Nurse and his team’s season.

Naturally, with the team on a high and proving that they can actually perform well in front of a home crowd when it matters, it would not be a surprise if many Canadians were to think about placing a wager on the event and potentially backing their team to pull off one of the greatest results.

Sports betting in Ontario has recently taken off within the province as new laws and regulations have been brought in that have helped to encourage the industry to become rather appealing to sports fans. This is hardly a surprise given that the most populous province is one that is full of passionate supporters who will back their team day and night, especially when they are facing adversity and have their backs against the wall.

Indeed, whilst many may be thinking about the potential of backing the team when they play in Ontario on April 28, it is perhaps wise to take a look at the latest news stories surrounding the game, and take into account how they could potentially impact any wager that may be placed on the game, or even the series for those who are confident that it will be extended into a Game 7!

Fred VanVleet is listed as doubtful

Perhaps the biggest concern for the Toronto Raptors as they head into another vital contest with the Philadelphia 76ers is the fact that Fred VanVleet has been listed as doubtful for the contest on April 28.

The All-Star guard has been added to the injury report because of a left hip flexor strain, therefore it remains uncertain as to whether he will be available to play or not. In fact, it might seem rather unlikely that he will take to the court, as he was listed as questionable before Game 5 was played.

Fred VanVleet gave absolutely everything he had to this season and was tremendous for much of it. Deserving All-Star. Sucks to see his body betray him down the stretch.

Some in Ontario might actually suggest that they could be better off without the influential player at the moment, though, as he has been far from himself when he has played in this NBA playoff series so far, despite the fact he enjoyed a career season beforehand.

This could mean the Raptors go for a starting five that is the exact same as the one that provided them with its 88-103 victory in Game 5 on the road to the 76ers – where the home team was booed by their own fans. This team consisted of Gary Trent Jr., Scottie Barnes, OG Anunoby, Pascal Siakam, and Khem Birch.

There is some good news for the Raptors, though, as Thaddeus Young – a former 76er – has been listed as available for the upcoming contest, after suffering a hyperextension injury to his left thumb in Game 1 of this series.

What is at stake?

As we know, the Raptors need to win the next two games in order to continue their NBA playoffs journey, with one defeat ending it all.

The winner of this series will go on to play the Miami Heat in the Eastern Conference Semifinal. If the Raptors were to make this stage of the competition, they would need to be alot better than they have been, though, as the Heat managed to sweep past the Atlanta Hawks 4-1.