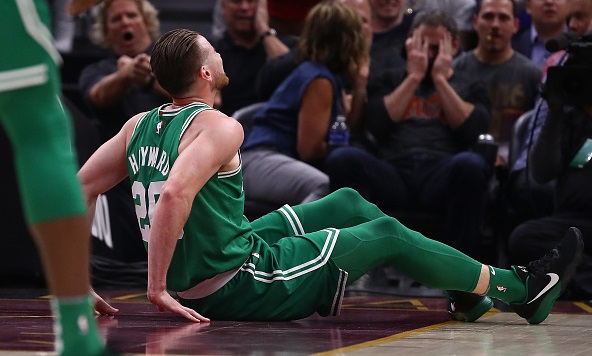 Less than six minutes into the new 2017-18 NBA season, fans, players and media were jolted by the shocking, gruesome injury suffered by Gordon Hayward in his Boston Celtics debut facing the Cleveland Cavaliers. Hayward came down hard among a cluster of players under the basket and visuals weren’t even necessary. The mics under the basket picked up Hayward screaming in pain and, unfortunately, the crack of his leg.

Right away, TNT play-by-play announcer Kevin Harlan said, “Hayward has broken his leg… Hayward has broken his leg.” That told viewers everything they needed to know, with only a shot of Hayward sitting on the floor and the players around him giving him some distance so trainers and doctors could work on their fallen colleague. Harlan’s definitive call took care of any questions the audience might have.

In a piece on how the TNT crew handled Hayward’s injury on the broadcast, Harlan explained what he was thinking in that moment to the Boston Globe‘s Chad Finn:

“Through the legs and arms and the very congested lane, I saw not the impact but just as he was coming up and falling,” said Harlan, “and I could see it was turning the other way. You knew right there. I could immediately tell that he was in trouble.”

TNT cameras did follow up with a brief shot facing Hayward up close and his left ankle was visibly turned in a way ankles aren’t supposed to be turned. It was grisly, but the TNT broadcast thankfully didn’t linger on the shot, nor did they show the image again at any point during the rest of the Celtics-Cavs telecast. (The play in question was shown at halftime, but that was an obligation to inform viewers who might have missed what happened.)

Turner Sports’ senior VP of production and programming Scooter Vertino, elaborated on how TNT’s tactful handling of the situation was influenced by previous experience.

“I think we probably have a little better idea of what’s appropriate in the situation,’’ he said. “I’m not taking a shot at anyone in prior years. We didn’t know what the production process was in situations like this until they had been experienced.

“There’s a very serious injury that has occurred. We are not going to be gratuitous with it. We are documenting the story and what’s occurring at the game. You can do that in different ways. It doesn’t have to be the same super slo-mo replay ad nauseum.”

Compare that, for instance, with repeated shots of Tim Krumrie’s ankle flopping around during NBC’s Super Bowl XXIII telecast in 1989. Granted, that was nearly 30 years ago and plenty of lessons have been learned since then. But that’s also the point.

Though the TNT broadcast team knew how to handle these circumstances compassionately, the telecast may have been helped by the game stopping as Hayward was attended to and eventually taken from the court. Everyone in attendance had an opportunity to process what had happened and give a sense of the feeling in the arena.

The game didn’t just immediately continue, leaving the players, announcers, fans in the arena and TV audience to somewhat cope with Hayward’s injury instead of just jumping right back into the action. Going back to the game and attempting to regain some normalcy surely varied depending on the viewer, but the Celtics and Cavaliers eventually making a competitive contest out of the season opener perhaps helped to move on a bit.

Ideally, sports telecasts wouldn’t have to deal with situations like this very often. But injuries — some of which can be rather graphic — are obviously a part of sports. TNT’s handling of Hayward’s injury and its immediate aftermath provides a course that other networks will hopefully follow. Those broadcasters, reporters, producers and directors have learned those same lessons after years and years of dealing with these situations.