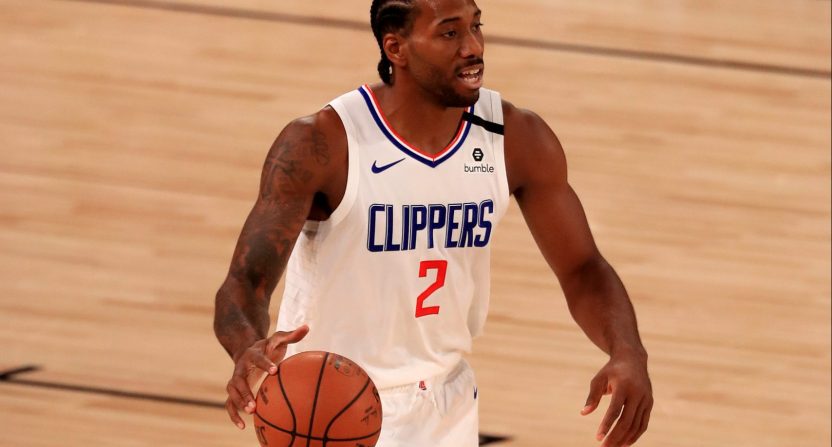 The NBA returned to non-exhibition action on TNT Thursday night, and viewership was something of a mixed bag.

The caveat here is that last night’s game was blacked out on TNT in Los Angeles, and aired on a pair of local RSNs, Fox Sports Prime Ticket and Spectrum SportsNet. This was not true for the three prior matchups, which were all national exclusives.

SBJ’s Austin Karp reports that if the local RSN numbers were added to the TNT viewership, the fourth game’s viewership would more closely resemble the first and third games. At the NBA’s midway point in February, the Lakers were averaging a 3.14 local rating and the Clippers were at a 0.97. In the massive LA market (slightly more five million TV households, per Nielsen), those average viewership numbers translate to another ~200,000 or so viewers. If not, then it’s just a low single digits drop compared to the first game instead of a mid single digits drop.

Sources say that when Los Angeles RSN figures are added in, Lakers-Clippers from last night will top the audience for the same matchup from opening night, which did not have RSN competition

Translation for all of this: it's not an easy comparison with RSNs airing last night https://t.co/qAH2A49xqu

Anyway, enough with the semantics games. The two NBA games and Inside the NBA were the top three cable programs last night in the 25-54 demo and unsurprisingly topped all other sports content on cable Thursday (the pregame show for Jazz-Pelicans ranked fourth with 313,000 viewers, while PTI was fifth at 301,000 viewers).

The NBA’s restart also was a slight disappointment when compared to MLB’s restart a week ago. The early Yankees-Nationals tilt (an exclusive national broadcast) drew four million viewers, though it’s important to remember that the rain delay that eventually ended the game was counted separately and not as part of the game itself. The late half of the doubleheader, Giants-Dodgers, drew 2.78 million viewers, topping the early half of the NBA doubleheader.

However, the NBA and MLB seasons won’t be defined by their restart night ratings. A packed Friday-Sunday of MLB action last weekend was largely a disappointment, with only four broadcasts topping two million viewers – and three of those were the two Thursday night games and the rain delay coverage. ESPN’s first Sunday Night Baseball games of the year (national exclusives) drew 1.39 million (Braves-Mets) and 1.33 million viewers (Giants-Dodgers), and a national tripleheader on Fox drew, from early to late, 1.91 million (Brewers-Cubs), 1.97 million (Giants-Dodgers yet again), and 2.79 million viewers (Yankees-Nationals). No MLB broadcast on cable this week has drawn even a million viewers, which includes non-exclusive broadcasts on ESPN, FS1, and MLB Network.

The NBA still has another two weeks of games in their restart before the start of the playoffs. If nationally televised games start consistently dropping below the one million mark, as we’ve seen this week with MLB games, then maybe we can start drawing significant negative conclusions about the league’s restart. For now, it’s still far too early, but viewership on Thursday could have been far worse for the NBA.