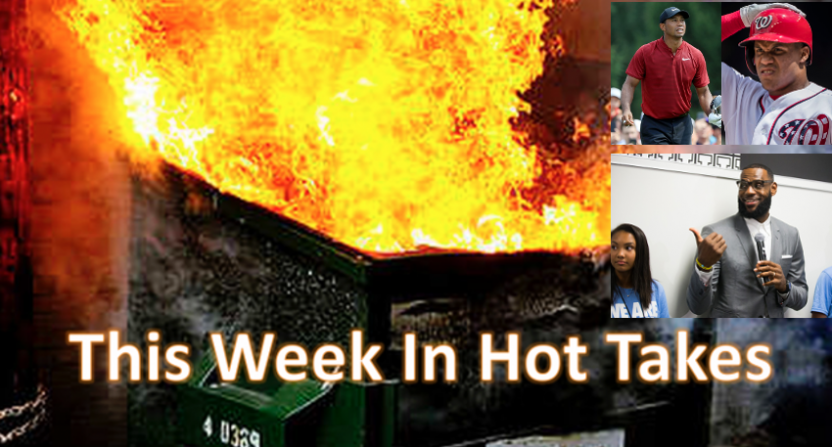 Welcome to another edition of This Week In Hot Takes! This time, we’re looking at all the hottest sports media takes from August 3-9. Let’s get to it.

After promising that a particular segment wasn’t going to be about politics, Fox Sports Radio’s Doug Gottlieb spent over two and a half minutes talking about how great he thinks Donald Trump’s presidency has been for the U.S. economy. He then dove into Trump’s Twitter behavior and said that’s the primary reason Trump is unpopular, and then compared him to Kevin Durant:

“So many of the things [Trump]e does, it’s about the tweets he sends out. If somebody took away his Twitter or he only tweeted “The economy” every day, there’s really no competition out there for him. Know who that is in sports? It’s Kevin Durant. Kevin Durant has won two straight Finals MVPs, he’s won two NBA championships, he also has a previous league MVP. He’s in one of the top 10 cities in the entire world in San Francisco, he is revered for his talent, in fact, his pull-up shot as a seven-footer is widely regarded as an unstoppable weapon…”

“I believe that Kevin Durant is the best player in the NBA. Why isn’t he viewed as such? Is it because he left the Thunder and went to the Warriors, who had won 73 games and beaten the Thunder? A little bit. But the truth is, trying to fight every fight on social media and trying to clap back at people, first he had the burner account and then his own account. There’s no difference between the two [Trump and Durant]. Both should be revered! Both should be celebrated!”

It’s one thing to say you’re not going to talk politics and then spend over two minutes doing exactly that (and those particular takes that Trump has been great for the economy and only is criticized for his social media use are both highly political), and it’s another still to compare Durant to someone he’s often criticized in Trump just because he also engages critics on Twitter. Criticizing Durant’s Twitter usage is one thing, and discussing that particular approaches may not always be the best for him is fair, but it’s silly to say that critics should be able to say what they want and Durant shouldn’t be able to respond. And saying that Durant wouldn’t be criticized if not for his social media use is ridiculous, as a lot of the criticism lobbed at him has nothing to do with that. But it’s comparing Durant to Trump that’s particularly silly; there are many people who engage their critics on Twitter, including Gottlieb himself from time to time. That doesn’t make them like Trump.

4. Ray Lewis claims crime dropped in Baltimore when he played: Lewis, the FS1 analyst who was inducted into the Pro Football Hall of Fame last weekend, had quite the take on his own impact:

Ray Lewis said the contagious positive energy surrounding his induction reminds him of his playing days. "When I played, crime went lower in Baltimore," Lewis said. "It’s like, nobody needs to be mad now. It’s like everybody wants to be happy and celebrate."

Lewis played in Baltimore from 1996 to 2012, and the statistics do not appear to back him up; there was a decline in homicides from 2007-2011, but it spiked again in 2012. So unsurprisingly, “whether Ray Lewis is playing for the Ravens” does not seem to be a major predictor of crime levels in Baltimore. (He’s made this argument before and extended it to all football players,  claiming that the 2011 NFL lockout would cause increased crime nationally if it lasted into the regular season.) But hey, when Lewis was playing, at least one man charged with two counts of murder who pled guilty to obstruction of justice wasn’t on the street…

3. Brandel Chamblee claims Tiger Woods “got the least out of his talent of any player in history,” would have won more if he hadn’t worked out: Golf Channel analyst Chamblee is known for some hot takes, especially on Tiger. After all, he’s the guy who gave Tiger a “F” for a five-win season in 2013 over minor rules violations and compared that to cheating on a test, leading to lawsuit threats from Tiger’s camp. He also blamed Tiger for the U.S.’ Ryder Cup struggles in 2016, leading to a heated on-air argument with David Duval. And this week, Chamblee was at it again, first on the Golf Digest podcast:

“I would argue he got the least out of his talent of any player, maybe in history.” That’s an incredibly bold claim to make about someone who has won 14 majors, more than anyone but Jack Nicklaus, and is second all-time with 79 PGA Tour wins. (By contrast, Chamblee has just one PGA Tour win, in 1998 at the Greater Vancouver Open.) But Chamblee went on to argue that Tiger should have won “twenty-five, 30 major championships and 100-plus events” based on talent alone. Right. Oh, and Chamblee had the best possible argument as to why Tiger didn’t actually do that in a later interview on The Dan Patrick Show:

.@chambleebrandel says that if Tiger Woods never lifted weights, "he would have won 20+ major championships and 100+ events." pic.twitter.com/ymk5ncA0vS

Yeah, that was clearly the problem. Never mind that Tiger’s intense fitness regimen was a huge part of what let him hit farther than much of the competition, and was absolutely crucial to his success. But sure, he never should have touched a weight.

2. Joe Simpson questions Juan Soto’s age: Braves’ TV analyst Joe Simpson is at it again. A week after going after the Dodgers for wearing t-shirts and shorts in batting practice (and winding up in this column as a result), Simpson is back on it, this time questioning if Washington Nationals’ outfielder Juan Soto is really 19.

“If he’s 19, he has certainly got his man growth. He is big and strong.” There is no evidence that Soto isn’t 19, and Simpson was deservedly called out by the world for this:

Age fraud hasn’t been a thing in Latin America in nearly a decade. But then again Joe Simpson is stuck in the past, so it’s not a surprise that he proffers this sort of garbage. Ignore it.

I haven’t heard any evidence at all that his age is wrong, and just assuming it is based on his performance is just a little bit ridiculous https://t.co/XGdTb2kugP

Simpson also was confronted about this by Nationals’ GM Mike Rizzo between games of the doubleheader, and backed off a bit in the second game, saying Soto was “a bonafide 19.” But raising this was ridiculous, and there’s a case that Soto might even be able to sue over Simpson’s remarks. (He’s unlikely to, but still.) And the Dominican Prospect League wasn’t happy either, calling for Simpson to recuse himself from a game, or for the Braves or MLB to step in:

So that is quite the take.

1. Bill O’Reilly says LeBron James should “go to Chicago and help the poor people there who are experiencing unprecedented violence”: James’ opening of a public school in Akron created a whole bunch of takes, especially after President Trump weighed in to bash James (and CNN interviewer Don Lemon) and the sports world fired back. Former Fox News pundit Bill O’Reilly had quite the take on this himself, saying that it’s not good enough for James to help kids in Akron, as he needs to go solve Chicago’s problems too:

If LeBron James wants to champion social justice as well as basketball, he should go to Chicago and help the poor people there who are experiencing unprecedented violence. Please check out my commentary on https://t.co/fqUvO5EEW0.

O’Reilly’s actual piece here is paywalled, and we’re certainly not paying to read it, but that general thesis is dumb. And he was dunked on rather hard for this:

Is there anything more American than helping your hometown? Surely we can all see what O’Reilly is doing here. To folks like Bill, Chicago is just a stone to pick up and throw in a tantrum. https://t.co/XLFyZu3esh

Are you going to West Virginia to help with the opioids addition? Like, is Chicago just a buzz word for black people?

If Bill O'Reilly wants to champion social justice, he should stop sexually harassing women and spending tens of millions of dollars on settlements to keep them quiet. That money would certainly be better spent helping the poor in Chicago. https://t.co/fD5QqfpH7a

Well Bill if you didn’t have to pay $32,000,000 for sexually harassing your own coworkers, you could’ve used that money to really make a difference in Chicago yourself

how do you create a website called bore and no one intervenes https://t.co/Wn7DKE50kG

BOR.com indeed. Home of all the spiciest takes.