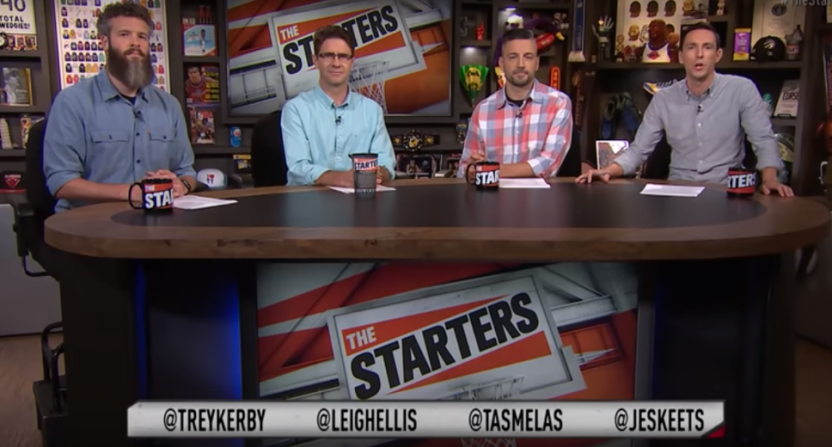 When NBA TV cancelled The Starters this June after six years on those airwaves, there were questions of what was next for the group (hosts Tas Melas, Leigh Ellis, Trey Kerby, and JE Skeets, and producers Jason Doyle and Matt Osten). Well, some of those questions have now been answered, and in appropriate style referencing Michael Jordan’s 1995 comeback fax:

Skeets then provided further details in a follow-up tweet:

Finally, your boys have come back to podcasting!

Beyond thrilled to announce that @NoDunksInc has joined @TheAthleticNBA.

As noted there, this new show will be carried on the “The Free Agents” podcast feed they launched this summer, now rebranded as “No Dunks.” Ben Strauss of The Washington Post has more details on the deal, including that it will involve daily podcasts in front of The Athletic’s paywall (featuring a lot of the humor the group’s been known for through their time as The Basketball Jones and then The Starters),  that the group can still pursue a separate video deal (either for simulcasts of their podcasts or for other content), and that further behind-the-paywall extras are planned:

In addition to quirky humor, the hosts have plans to interview Athletic writers about their biggest NBA stories. “The idea is to draw from our newsroom and highlight the news from The Athletic that’s driven by people on the front lines with these teams,” said Nick Adler, The Athletic’s general manager of audio. “Adding audio makes the ecosystem that much better for subscribers.”

“The Starters” have plans for additional podcast series that would be available behind The Athletic’s paywall that could feature trivia games, mail bags and long-form interviews with local writers.

Strauss’ piece also has a notable quote from Adler on the overall philosophy of what they put outside the paywall, which includes the general-interest podcast “The Lead” they launched last month, plus one episode per week (with another one paywalled, but without ads) for many of their more sport-specific or team-specific podcasts:

“It’s about reaching a broader audience,” Adler said. “I think we see putting things outside the paywall as a way for more people to find out about The Athletic.”

That makes sense, especially with this particular deal. The Starters have a big and passionate following, and free daily podcasts from them should bring some overall attention to The Athletic. And there’s an extra level of potential subscriber gain if they’re doing bonus podcasts behind the paywall and also interviewing Athletic writers on the free show; that might get some listeners to take the leap into subscribing to check out the writers they’re talking to.

This deal also seems to make a fair bit of sense for The Starters. While they’ve been doing video shows for the last six years with NBA TV (and before that; the video show dates back to 2008), it all started with the Basketball Jones podcast back in 2006 (originally featuring Skeets and Melas, with Doyle producing). That podcast found a lot of success, including on Yahoo, on Grantland’s podcast network, and on Canada’s The Score (both on TV and then on the website), and it paved the way for their video side, so this is a return to their roots. And they’ve done podcasts recently too; the Twitter show they did starting in 2016 was also available as a podcast, and a lot of what they did on the regular TV show translates to podcasting too. It also makes sense that this deal allows them to strike a separate video deal, as that could keep some options open for them to expand their presence. We’ll see how this turns out, but at the moment, it looks like something that could work well for both sides.