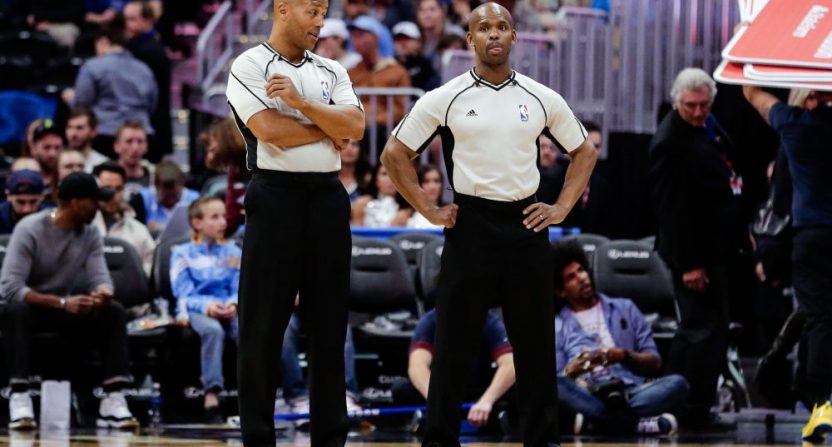 It’s the NBA offseason, and that’s where ridiculous discussion really shines. Beyond the endless debate about where LeBron James and other pending free agents may wind up, and the discussion about who will go in the first few picks of the draft, this is also when some even stranger things float to the surface. Such as a Reddit thread Monday from user danmaker99, wondering why the rest of the Warriors’ starters can’t just lock arms and keep opponents away from Steph Curry on each possession, allowing Curry to just drain open shot after open shot.

Some of the replies were serious, while some of them went even deeper into the joke world. And then, on Tuesday night, the NBA refs’ official account (last notable for live-tweeting about calls during Game 3 of the Finals) weighed in in response to a tweet about this from Vice News Tonight correspondent and New York Times magazine writer-at-large Jay Caspian Kang:

Ok I know I’ve slandered NBA reddit but I take it back this is the best idea I’ve ever seen pic.twitter.com/ktINknzef2

Here we go… The defender has the right to be between his opponent and the basket. The other players around Curry would inevitably have to move to stay with him, and would be committing an illegal screen as soon as they made contact with a defender. cc @PabloTorre @pardisparker https://t.co/Qt6NhYUaVz

Parker is a Comedy Central host, and he mentioned the Reddit thread in a tweet at the refs’ account Monday. And while it sounds like the strategy as described might not quite work, it’s at least fun to consider, and maybe it could be more legal with a few tweaks. After all, as noted in the Reddit thread, Amir Johnson and Jonas Valuncias of the Raptors once got away with an arms-locked double screen back in 2013:

Even if the theory doesn’t quite work, it’s been considered almost everywhere in the past two days. And that’s far from the only place this has been discussed. Another detailed case comes from FRS Sports’ Zach Harper, who dove into this with a full piece Tuesday:

To put it mildly, it’s pretty clear that danmaker99 is a genius. This serves as the type of innovation the NBA needs in order to stay a step or three ahead of the next wave of game plans. The brilliant thing about this idea is the Warriors already have the physical attributes to make this work.

Draymond Green has a 7-foot-1 wingspan and we know he can box out with the best of them. Kevin Durant doesn’t have the physical strength of most, but his 7-foot-4 wingspan makes up for it. The Warriors could also employ David West into this strategy. He’s one of the strongest guys in the NBA and his 7-foot-4 wingspan also suffices here. Klay Thompson doesn’t have a huge wingspan (6-foot-9) but it’s nice enough to allow him to remain on the court.

…We’ll go with the lineup mentioned above just for starters. With Curry literally surrounded by Draymond, West, Durant, and Thompson, they have more than enough defense, shooting, and arm length to create this bubble of destruction. We can call it the Eye of the Storm or the Eye of the Steph or something that markets nicely with the DVD release of Hurricane Heist, which might be one of the funniest movies ever created. But this lineup should be effective enough in creating this zone for Curry to operate.

What Harper’s piece also notes is another key element of the Reddit thread, though; a video of an unconventional defense used against Curry (and his brother Seth) by Korean actors and comedians. Involving wacky waving arm inflatable tube men, a player with a peacock-like layer of extended arms on his back, and a giant inflatable soldier that repeatedly blocked Curry’s shot.

While the inflatable soldier might not be allowed on a NBA floor, another Reddit poster suggested an equivalent:

Comment from discussion Serious question: why can’t 4 Warriors starters lock arms and form a ring around Steph Curry, so he can take open shots?.

The Tower of Power is a great name, especially for something with a Bay Area connection. (No Victor Conte in this one, though.) And if that’s not allowed, Harper had a similar suggestion for how the Sixers (plus newly-signed Celtics big man Aron Baynes) could counter this:

Here’s the strategy for the Sixers. Embiid stands just outside the perimeter formed by the Warriors teammates. Baynes stands pretty close to him but doesn’t crowd the big man. Embiid takes Barea in front of him; Baynes takes Thomas. In an effort to block the highly protected shot by Curry, Baynes and Embiid toss their smaller teammates into the air. Then they have the responsibility to catching them, like we often see male cheerleaders do after launching their female counterparts into the air.

The players being thrown in the air have to be small enough to not completely wear down Embiid and Baynes. But Embiid especially because he needs to have that energy to score on the other end. Granted, this has highly dangerous risks involved but it also creates a challenge to the shot of Curry that otherwise couldn’t happen. Throw Ben Simmons back to protect the basket and he can grab the rebound and immediately go up the court.

Some might think that this has stimulated entirely too much discussion by this point, but this is much, much more entertaining than the next 2,000 pieces suggesting LeBron may wind up in city X thanks to reason Y, or LeBron isn’t great for reason Z. (Thanks, Kobe. Very Baylessian of you.) We’ll take discussion of the Hurricane Heist and the Tower of Power over that any day. Especially when the refs weigh in.