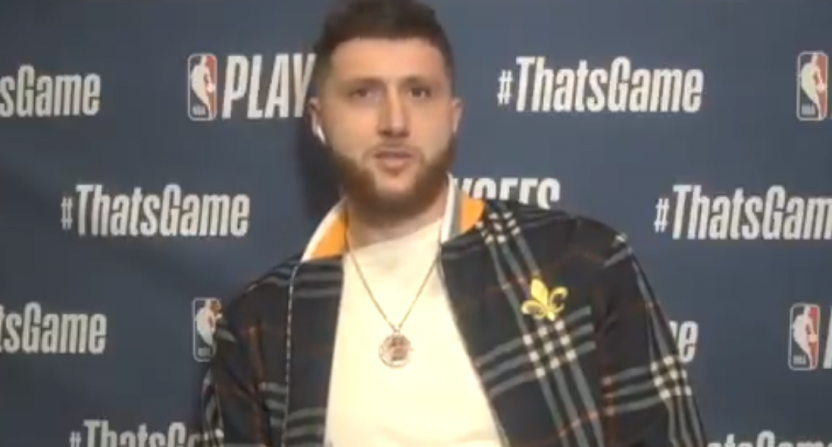 ESPN’s Kendrick Perkins is certainly not shy about expressing his opinions. That’s his job, after all.

But players absolutely see and hear criticism (or they’re helpfully told about it by media members looking for a reaction), and sometimes those players don’t have any issue coming back at Perkins or other analysts. It’s a bit different for someone like Perkins, who played 14 seasons in the NBA, than it would be if some moron like me decided to swing the take hammer. When ex-players criticize, current players are both more likely to care about what they’re saying, and while it means they might respect the opinion more or give more leeway to people who have played the game, it also means they’re more likely to push back.

That’s what’s happened this weekend, as Perkins took to Twitter to call Blazers center Jusuf Nurkic (along with teammate Enes Kanter) the worst defensive big in the league.

Mike Malone flat out coached Terry Stotts!!! Nurkic and Kanter are the worse defensive bigs in the NBA! Btw shoutout to Austin Rivers tonight for proving all the haters wrong…I just remember them saying he was in the NBA because of his Pops. Carry the hell on…

(He also referred to Nuggets coach Michael Malone as “Mike”, which as we recently learned is not something he’s a fan of.)

That critique found its way to Nurkic, who responded last night after the Blazers beat the Nuggets to even up their series 2-2.

Jusuf Nurkic references "clowns" who say he was "the worst defensive player in the league." Asked who he's referring to: "The guy at ESPN. The big fella. Perkins. I guess if he was in the league today he'd be a mascot. And I like him as a person."

"In this league today, he would be a mascot. I don't know why he claimed that. I like him as a person too. People don't understand the roles…but to say that stuff, that was weak"

The mascot line is solid. This, of course, is exactly what Perkins wanted, and he was ready with a retort:

Hey big @bosnianbeast27 you still had SIMILAC on your breath when I was putting in work, but keep working Big Fella you’ll get there!!! Carry on… pic.twitter.com/K3Mp1d37FW

So, that’s not a bad comeback, and having the Kobe clip ready to go is quality work. But at the same time, it’s not really making the case Perkins wants; that Kobe clip is old enough that the point isn’t necessarily relevant to today’s game. There’s always a role for a defensive big, but the modern game (and especially the modern postseason game) requires a lot of offensive skill as well. It’s fair to wonder what Perk’s career would look like if he came into the NBA in 2021 instead of 2003.

That said, hey, you play 15 seasons, you have a national analyst job, you can say whatever you want to. But the hyperbole involved with how he went after Nurkic made it inevitable that there would be a response.

Still, hey! It’s a media-player feud! And one with a built in catchy name.