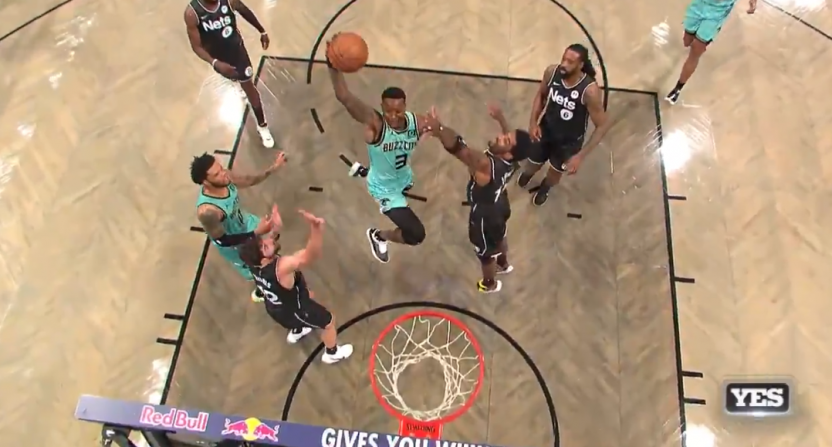 The Charlotte Hornets’ Terry Rozier threw down an awesome jam in Friday night’s game against the Brooklyn Nets. In the second quarter, the 6’1″ guard Rozier went right through Brooklyn’s defense for a high-flying dunk.

The dunk itself was great, but it was made even better with crazy calls from each team’s television play-by-play announcers.

We’ll start with the Brooklyn side and YES Network’s Ian Eagle, who’s well-known for the entertaining basketball calls (especially during March Madness):

And then the Hornets’ call, from Eric Collins of Bally Sports Southeast.

“Final two minutes of our… OH TERRYYYY! HOW DO YOU DOOOOO!”

Another day, another MONSTER DUNK from Terry Rozier!

That’s just one of the many incredible calls Collins has made on Hornets broadcasts this season (like on a Dunk of the Year contender from Miles Bridges last week).

Hornets announcer Eric Collins is ELECTRIC on the mic

Best calls of the season? pic.twitter.com/SrommWciFs

Rozier finished with 27 points and 10 assists in the game, but that wasn’t enough for the Hornets in a 130-115 loss to the juggernaut Nets.