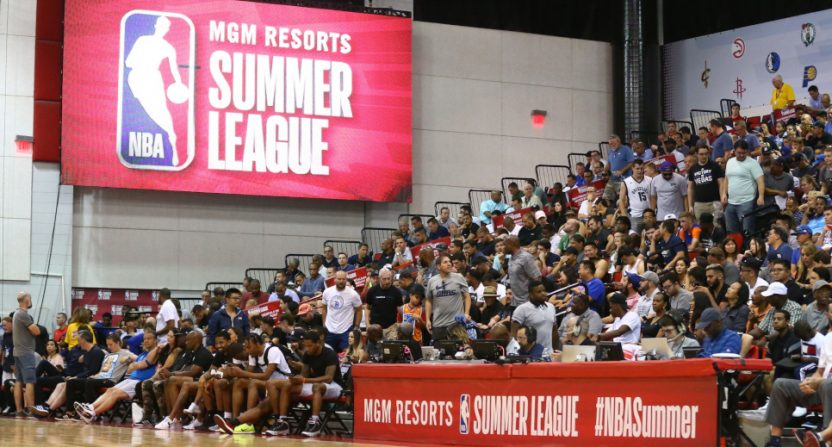 The NBA’s Summer League has often been a forum for experimental broadcasts, from The Starters calling a game through shooting games in vertical for phone consumption. There have been plenty of experiments tried this year as well, from the aerial Spidercam to lap cameras to second-screen chats and pop-up graphics. But one of the most unusual moves yet seems to be coming up Thursday night, as per this tweet from Paul Benedict:

Tonight we’ll be the first to ever produce an entire major sports event shot exclusively on smartphones. “Smartphone View” for the Atl/Was SL game will be available at 6:30 PM ET on ESPN App, ILP, and NBA TV Canada with @NoahEagle15, @RealAClifton, and @alexismorgan on the call!

Of course, shooting things on smartphones has recently been a selling point for smartphones, particularly around the long–running “Shot on iPhone” campaign and Google’s efforts to promote their Pixel phones’ cameras. But it’s harder to see the appeal of doing this for a TV sports broadcast. Even the previous ideas of shooting games in vertical or offering alternate feeds optimized for mobile consumption still used standard broadcast technology, and while smartphone cameras are way better than they used to be, it still feels like there’s going to be a drop-off in quality here. Comment, Dr. Ian Malcolm?

But with ESPN broadcasting all 83 Summer League games in one form or another, this definitely isn’t a bad place to experiment, especially with a game between the Hawks (24-58 last year) and the Wizards (43-39) that’s primarily airing on the ESPN app. And as SportTechie’s Jen Booten notes, some past experiments haven’t turned out great, but have still provided some valuable lessons:

The NBA is working alongside ESPN during the two-week offseason tournament to experiment with new cameras, sensors and second-screen experiences. Steve Hellmuth, the NBA’s executive vice president of operations and technology, says the league has created a “test bed” of innovation with the event and is encouraging creativity and failure.

“We can try things, suffer the chaos of failure,” he says. “Normally with game broadcasts you’re up against the wall. It has to work. It has to get done. You have one game, one shot. Four quarters and you’re out. But here at the Summer League we redefine the way that we work together and how we do things based on the fact that we can fall flat on our faces, pick ourselves up, and try again.”

…One such example is a lap camera, which the league tested during one game by having a cameraman capture footage from a courtside seat. The viewpoint was meant to mimic the way people now capture games on their smartphones, but Hellmuth said it would require the purchase of three premium seats because the fans to the cameraman’s immediate left and right often blocked the shots.

“It’s a shot we’ve seen repeatedly on social media so we wanted to look at it and see what it looked like for us with a broadcast-quality camera,” Hellmuth says. “The answer was that it was OK. It worked for certain shots, only as a replay, and didn’t work as a live camera.”

That seems somewhat appropriate for this idea as well. Just because smartphone videos and courtside shots are popular on social media, that doesn’t mean they’re going to work out great as a primary broadcast feed. But people seem quite eager to try out this smartphone-shot idea, and this isn’t the first experiment of that sort at Summer League, as a PC Mag piece by Sascha Segan notes that AT&T and the NBA have provided fans with smartphones to shoot video that’s then sent over AT&T’s 5G technology to the broadcast truck for highlights packages and so on:

The most interesting 5G experience I’ve seen so far is happening in the Thomas & Mack Center in Las Vegas. Now, I don’t know a ton about sports, but I know that people seem to love watching sports clips shot with smartphones from the stands. So AT&T and the NBA have planted folks with Samsung Galaxy S10 5G phones in courtside seats for NBA Summer League games, livestreaming their multitudinous perspectives ready for broadcast.

The idea is that 5G lets a lot more people stream much higher-quality video a lot more easily than they can with big, tethered video cameras, or with consumer phones using Wi-Fi. That video then goes to a broadcast truck where it gets sliced and diced for Facebook, Twitter, and the web mid-game; maybe in the future, fans will even be able to flip between dozens of streams and perspectives at will.

AT&T product marketing manager Phillip Coleman toured us around the arena to show off AT&T’s new web of partnerships: its deal to enhance and connect the NBA, a deal with ESPN, and a deal with livestreaming software app LiveU.

(That piece also includes a hilarious rebuttal from Verizon about how they did a 5G stream to selected cable-connected VR goggles with the Sacramento Kings last fall, and how they have “5G service in or around the US Bank Arena” in Minneapolis. Because “first use of 5G in an arena” is definitely something worth wasting everyone’s time arguing about. The larger takeaway is that both of these companies are trying out a lot of stuff that really doesn’t have much impact on everyday consumers at the moment, and that they’re both super eager to be “first” about things.)

At any rate, it may be interesting to see how this first “entire major sports event shot exclusively on smartphones” turns out (although we can certainly debate if a Summer League game between the Hawks and Wizards really qualifies as “major”). Maybe it will be better than it sounds. And maybe this will even lead to further usage of smartphone-shot alternate feeds during the year. Or maybe this will be like the lap camera, something tried out at Summer League that probably won’t be coming to more prominent broadcasts any time soon.