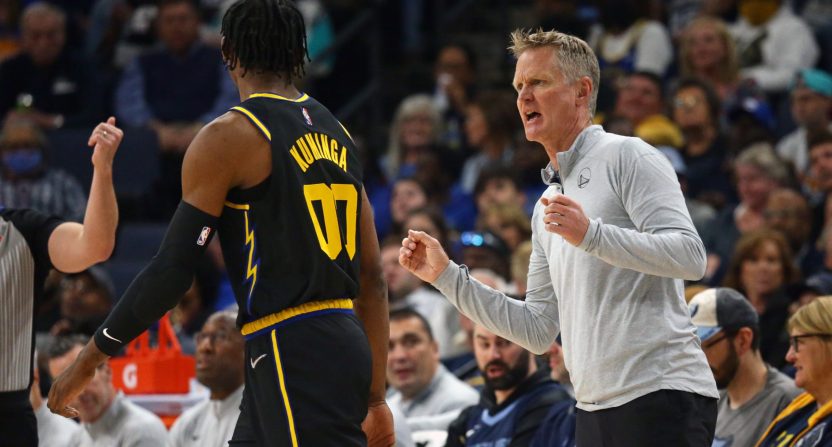 Stephen A. Smith’s bread and butter these days is having (very loud) conversations about the sports news of the day. However, that doesn’t mean the ESPN talent doesn’t also do some reporting from time to time as part of his repertoire.

He often mentions things that his sources have told him while appearing on First Take and other ESPN shows. However, he’s also been prone to get things wrong from time to time (to time), which can come back to bite him.

Back in August, Smith was discussing the Golden State Warriors and specifically shifted the conversation to forward Jonathan Kuminga, saying that he was hearing that the 19-year-old is too distracted and doesn’t have a good work ethic.

Some interesting insight regarding Jonathan Kuminga from Stephen A. Smith on First Take this morning ?#NBATwitter #DubNation pic.twitter.com/8gGP8V5BzD

“I’m worried about Kuminga. I’m hearing too many things about him off the court in terms of his head. The level of discipline he lacks. You understand?

“Some of the foolishness. I’m not getting in his personal business. I’m not saying nothing like that. I’m talking attitude, I’m not talking actions. I’m saying that attitude, the level of focus, commitment, determination, just putting your head down. doing the work.

I’m hearing that he’s shortchanging the Warriors in that regard, and he gotta get his act together, because I’m a Jonathan Kuminga fan.”

Soon after, Kuminga responded on Instagram, saying “Hard work beats talent when talent doesn’t work hard,” as a caption on his photo.

Now, his head coach is chiming in as well. On a recent episode of The Athletic’s “The TK Show,” Warriors head coach Steve Kerr responded to and refuted Smith’s claim.

“I know there was that weird report that came out, I think Stephen A. Smith said something about JK,” said Kerr. “Honestly, [Warriors GM] Bob [Myers] and I, when that came out, called each other and asked each other, ‘Where did that come from?’ Because it made no sense.

“JK’s been great,” Kerr added when discussing Kuminga. “He’s done everything we’ve asked of him, he’s worked hard, I enjoy coaching him. He’s right where he needs to be and he’s gotta just keep getting better every day. But we’re very happy with his summer and everything he’s committed to.”

Kuminga, the Warriors’ No. 7 overall pick last year, appeared in 70 games and averaged 9.3 points and 3.3 rebounds. It certainly sounds like he’s on his way to becoming a strong contributor for the defending NBA champions. It also sounds like Stephen A. might have gotten some bad intel.