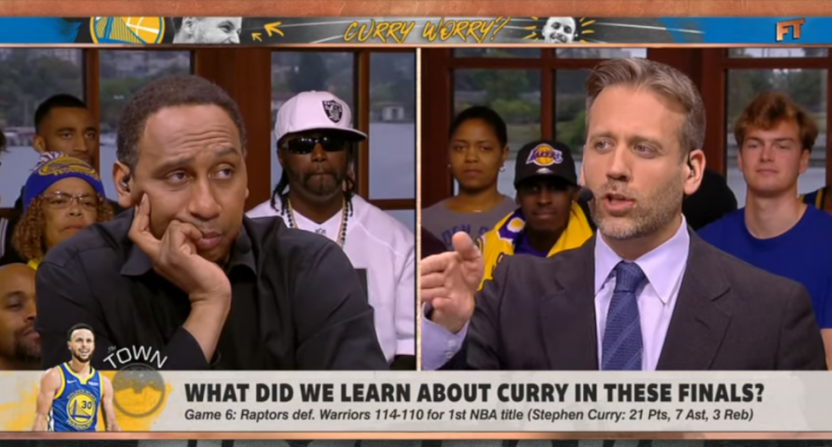 The final episode of the Gotham Chopra-directed “Stephen vs The Game” six-part Facebook Watch series on Golden State Warriors’ star Stephen Curry is out now, and it takes quite an interesting approach to the Warriors’ postseason. The episode is called “The Town,” and it has notable narrative threads about the team wrapping up their time in Oakland and preparing to head to San Francisco next year (including Curry touring the new arena, plus plenty of discussion about the fans in Oakland seeing the final games there), about the injuries the Warriors suffered throughout the playoffs, and more. But what’s perhaps particularly interesting from the media side is the way this episode features sports pundits criticizing Curry and the Warriors, and how Curry eventually reacts to that.

Throughout “The Town,” Chopra regularly splices in audio clips of pundits (especially ESPN First Take hosts Stephen A. Smith and Max Kellerman, but also some Fox and TNT personalities) questioning the team through the playoffs, questioning Curry’s big-game credentials, saying the team needs Kevin Durant to play and more. Then, after the season ends with the Warriors’ six-game Finals loss to the Raptors and after Durant leaves for the Brooklyn Nets, there’s further punditry about if the Warriors are “done,” and Curry’s eventual on-camera reaction to that helps close the show out. Here’s that clip, titled “Stephen vs The Haters”:

“At one point they said we were never going to win a championship, and you heard that plenty of times. We don’t need any extra motivation, and I don’t either. This year, you could almost say we were playing with house money, because we had won championships and we were the hunted. Now we get to go back to hunt.”

The usage of critical punditry throughout is pretty interesting, with takes from all sorts of debate shows overlaid on game footage, footage of Curry’s life at home, and more. There are occasional clips of Curry watching TV (especially in a hotel room in Toronto during the Finals), but Chopra told AA by e-mail that the punditry footage isn’t about Curry consuming all of these takes (Chopra said Curry is aware of some of what the pundits say about him, but doesn’t particularly focus on it), but rather is a way to illustrate how intensely the sports media reacts to developments with Curry and the Warriors and how Curry and the team push on despite that noise:

“In many ways, the media voices and punditry provide tension and conflict for the story. With Stephen—and this year in particular around the Warriors—there was constant noise and scrutiny. Every single game, people were watching and dissecting the team dynamic and chemistry. To watch Steph, and the whole organization in general, manage that was fascinating in its own way. And to be able to play that off against one another—the view from the outside vs the internal take from Steph on what he was hearing, feeling, doing helped propel the story forward. I also think it helped decode his process—how amidst all of that craziness, he’s able to stay focused and balance and perform at the highest level.”

And while the use of punditry was particularly amplified in this final episode, outside takes on the Warriors and occasional Curry reactions to those have been seen throughout this series. The fifth episode, “Faith,” premiered May 30, and near the end of that episode, we see the Warriors clinching the top seed in the Western Conference, followed by Curry on the golf course talking about the high expectations media and fans have for the team.

There, Curry says (around 28:50) “It’s a narrative thing, right? For me, I’ve never really gotten off on the praise of others, in terms of that being what I identify with or that’s what I seek. The most consistent thing is being able to grow in the things that matter in my life. In each season I go through, talking about each season of life, how am I as a father, how am I as a son, as a husband? Those things are the barometer of success for me. All the while, I’m putting the ball in the basket and trying to do it at a high level.”

And the media discussion is a notable wider element of this series. Stephen Curry vs The Game certainly isn’t entirely “Stephen Curry vs The Media,” and the on-court challenges he and the Warriors face are more significant than anything pundits say about them, but the pundit takes are an interesting way to illustrate what others are saying about Curry and his team. And even while many of those takes wind up being proven wrong quite quickly (see TNT analyst Charles Barkley’s take around 8:25 in this latest episode that “They really got no chance of winning without Kevin Durant, this series or any other series,” a take delivered during the Houston series; the Warriors would win that without Durant, win the conference finals, and then almost win the NBA Finals mostly without Durant), they illustrate how much noise and hyperbole there is out there about Curry and the Warriors, which stands in particular contrast to the footage of Curry going about his day-to-day life (there’s lots in there of his home life, including how he and wife Ayesha take care of their kids) amidst the noise and still finding ways to deliver on the court.

In a lot of ways, Curry’s response to the regular media narratives and criticism feels about right. He understands why the Warriors are covered the way they are, and why there are plenty of hyperbolic takes on them. But he isn’t out there engaging with particular media personalities who criticize him (an approach that hasn’t always worked out well for athletes, as some trolls feed on that), or questioning the media for covering his team. Instead, he’s recognizing the narratives that are out there, but not seeming particularly bothered by or affected by them, and saying that he’s just going to do his best regardless of what people say.

Overall, Stephen Curry vs The Game is an interesting series, and one that suggests there still can be some value to an extra-access series formatted around an athlete. It’s another notable entry from Chopra, whose previous recent sports documentary efforts include Religion of Sports and Tom vs Time (which recently won the Outstanding Serialized Sports Documentary category at this year’s Sports Emmys), and it’s one that gives an extra glimpse into who Curry is and how he deals with the pressure on him and his team. And while there aren’t any further installments of this series planned, Chopra told AA he loved working with Curry and would be open to other collaborations down the road. But for now, he’s quite pleased with how this series played out.

“I’m really happy with how the project has turned out. I think it really captures the depth of Steph, his story, and his game. He is unique in his approach to the game and it wasn’t easy to really illustrate that. But I think when people watch the whole series, they’ll see a guy who is pretty relentless in his devotion to his craft, who is hypercompetitive, while also being balanced away from the court and being a good dad and husband. That sort of holistic version of the man is something I’m proud we were able to present.”