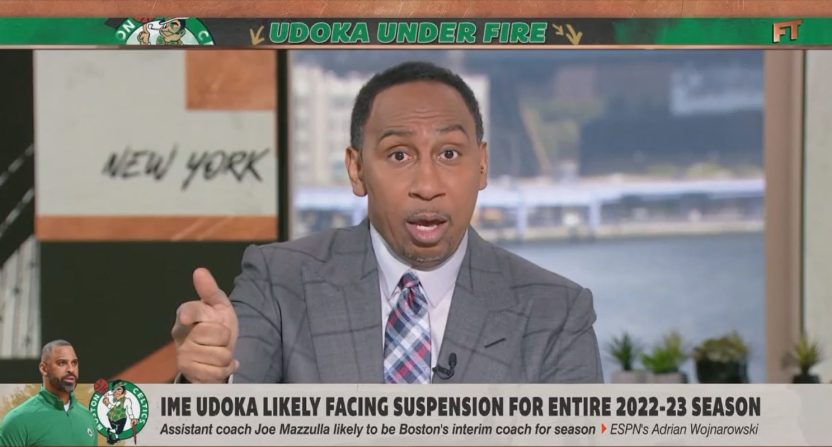 As a potentially season-long suspension for Boston Celtics head coach Ime Udoka looms, Stephen A. Smith is faulting the organization for leaking details of an improper intimate and consensual relationship to the media.

“I’m appalled that this was publicized,” Smith ranted Thursday morning on First Take. “I know of plenty of situations spanning the entire world of professional sports…the list goes on and on where folks are messing around with each other. You don’t see this becoming a story.”

This isn’t the first time Smith has issued a warning about the dirty laundry he can air to the public, recently cautioning former New York Giants running back Tiki Barber that he knows “a lot of stuff about you.” How nice of Smith to repeatedly remind people that he could tarnish their public image if he wanted to. But according to Smith, the Boston Celtics didn’t show similar restraint in the case of Udoka, claiming the organization wrongfully leaked the head coach’s relationship with a female staffer to the media.

ESPN’s Adrian Wojnarowski was first to report that a lengthy suspension was looming for Udoka, with Shams Charania later tweeting that the pending punishment stemmed from an “improper intimate and consensual relationship with a female member of the team staff.” Although as Awful Announcing’s Jay Rigdon previously noted, a burner account scooped Wojnarowski and Charania on the nature of Udoka’s suspension hours earlier.

“This was leaked by the Boston Celtics organization! I know a lot of things about the Boston Celtics organization as it pertains to stuff like this that I could repeat. It would be irresponsible and none of my damn business. Just like it’s none of our damn business now,” Smith continued before implying that Udoka’s race may have played a role in this information being leaked. “And I’ll say it again. I don’t see nothing being put out and disseminated to the masses with these white dudes that’s doing this stuff. I know plenty of white dudes that were screwing around while they executives or coaches or anything like that. I ain’t talking about the NBA. I know plenty! I’ve never seen this publicized!”

In 2021, Smith criticized the Celtics for promoting Brad Stevens to team president following a subpar season as head coach, saying, “it’s beautiful to be a white guy” before eventually storming off the First Take set over the issue. The promotion of Stevens eventually opened the door for Boston to hire a minority head coach in Udoka.

There isn’t much precedence for professional head coaches having their consensual intimate relationships leaked to the media. Usually, when details of an intimate relationship gets leaked, it stems from accusations of indecency, such as was the case with Isiah Thomas in 2006, Luke Walton in 2019 and Mickey Callaway in 2020. But there have been no such accusations in the case of Udoka.

“I know people that’s acted up and has had stuff happen. I don’t see their business out there!” Smith continued. “Nobody’s publicizing it and that’s within the same damn organization! Don’t get me started. Don’t get me started! But Ime Udoka’s stuff is out on Front Street. This stinks to the high heavens.”