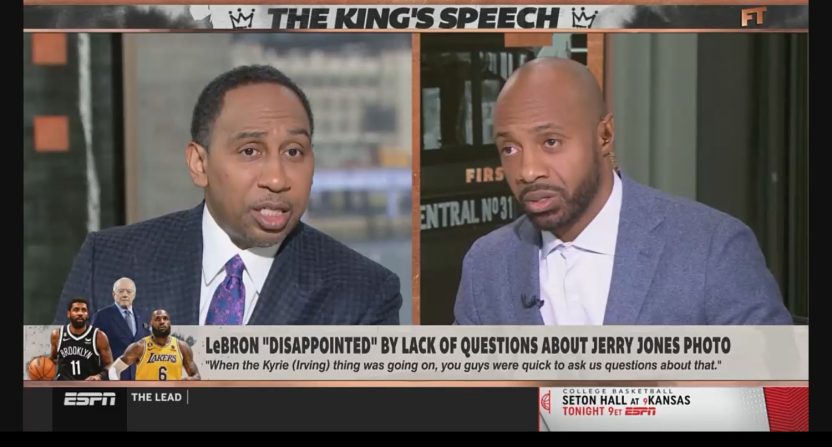 Wednesday night, LeBron James criticized reporters during his postgame press conference for not asking him about the recently released Jerry Jones photo from 65 years ago.

James’ issue with the media stemmed from the fact that he fielded questions about Kyrie Irving’s antisemitic controversy last month, but was yet to be asked about Jones. Thursday morning on First Take, Stephen A. Smith, a Jerry Jones defender, applauded James for calling out the fourth estate.

“I can’t applaud LeBron enough for what he said, because that wasn’t about Jerry Jones if you’re listening,” Smith said on First Take. “What LeBron was talking about is unavoidable. The media. Trump says something, they ask LeBron about it…LeBron James has been subjected to question after question after question, but suddenly when it came to Jerry Jones, you didn’t ask? Because I assure you, if I was in that press room, I would have asked LeBron about it.”

After The Washington Post shared the 65-year-old photo of Jones as a teenager, in which the Dallas Cowboys owner was seen among a group of young white men preventing Black students from integrating an Arkansas high school, Smith labeled it an act of “cancel culture.” It’s hard to believe Smith would have called the response to the photo an example of “cancel culture” and then sought an NBA player’s thoughts on the topic.

“The fact that he wasn’t asked that question and he had to bring up the subject to a media in the year 2022 gives credence and buffers the argument that Kyrie Irving was making when Kyrie said, ‘where’s the intensity when our people are going through stuff,’” Smith continued. “That’s what LeBron was calling out.”

James has been asked about non-NBA topics and issues, but most of those questions came after he prompted the conversation. Usually, James is only asked about Donald Trump, a political or social issue if he’s directly involved or after he tweets about the incident.

“The media is the fourth estate, we play a significant role in subjects that are actually broached and subjects that are avoided,” Smith said. “Some people in the media will say ‘well he’s an NFL owner, you’re an NBA player, Kyrie’s a contemporary.’ But that doesn’t wash. Cause you’ve asked LeBron about a multitude of things that were not basketball relates, so why didn’t you ask about this now?”

“If you’re the media member in that room last night and you didn’t ask LeBron a question about Jerry Jones, you should be looked upon with a raised eyebrow,” Smith claimed.

It’s totally fair for James to offer an opinion on Jerry Jones and the NBA star is just in taking the stance that the Cowboys owner should continue to be condemned for the photo. Had James tweeted about the issue or offered comment elsewhere, reporters may have been more likely to ask him about it in a postgame press conference setting. But days after Smith argued Jones shouldn’t be judged by his actions of 65 years ago, it’s surprising to hear him now join James in raising an eyebrow at the media for not asking NBA players about an NFL owner.