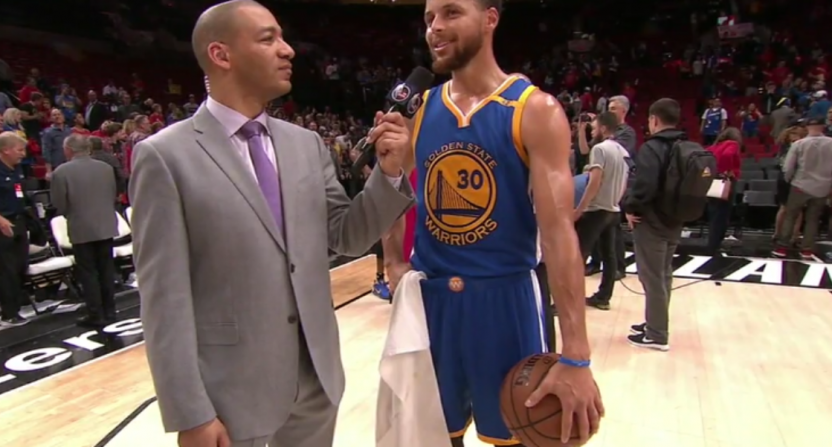 Picking up a win for an injured teammate or coach is a time-honored sports story, made particularly famous in the case of Notre Dame’s Knute Rockne and George Gipp (and the 1940 film Knute Rockne, All-American, which starred Pat O’Brien as Rockne and Ronald Reagan as Gipp; Reagan would later use “Win one for the Gipper” as a campaign slogan). On Saturday, it may have turned into a subject of trolling. Golden State Warriors’ head coach Steve Kerr missed Game Three with illness, and despite a 16-point deficit in the second half, the Warriors were able to come back to beat the Portland Trail Blazers 119-113 under interim head coach Mike Brown. Afterwards, Warriors’ star Steph Curry spoke to ESPN’s J.A. Adande, and gave what was seemingly a very sincere speech about how Kerr told the team to “win one for the Gipper,” so they did. He also said they were giving him the game ball:

However, it seems there’s a little more to this. On SportsCenter later, John Anderson interviewed ESPN.com reporter and columnist Marc Stein about this. Stein said Curry’s comments made many wonder if Kerr’s illness was more serious than had been let on, so he checked into it. As he says, the illness itself is no joke:

Stein went on to say that Curry’s story of Kerr telling the players to “win one for the Gipper” is the opposite of what he heard happened, though:

“Based on what I was told, Steve Kerr actually told his players this morning ‘Don’t make this about me, don’t turn this into a ‘Win one for the Gipper’ situation.’ So I think Steph Curry made an executive decision there to after the game, pay tribute to his coach, who is going through a tough time physically.”

There’s no dispute that Kerr is facing some significant health challenges. He missed 43 games of the regular season last year thanks to back issues, and those appear to have popped up again. Stein went on to discuss how Kerr was getting fluids on Saturday, and how he was so uncomfortable in Game Two that he took his sport jacket off against NBA policy. But it’s fascinating that Kerr told the team not to make this about him in those specific terms, and Curry went out and used those specific terms anyway. (This also helps explain the somewhat-smirk Curry shows in this interview.) It’s still a nice shoutout to his absent coach, but one with perhaps a little more of a joking edge than you’d initially imagine. As Stein went on to say, “Steph Curry made this about Steve Kerr, when Kerr actually told him ‘Don’t do that.'”