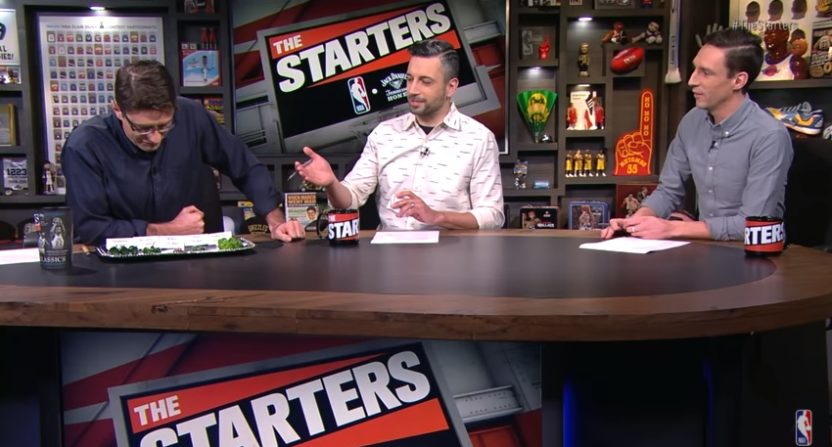 The Starters— JE Skeets, Tas Melas, Trey Kerby, and Leigh Ellis— airs its 1,000th episode on NBATV at 7 p.m. eastern, and Awful Announcing spoke with Skeets and Melas about their journey from their days as The Basketball Jones in Toronto to an established NBA presence now based out of Turner Sports’ headquarters in Atlanta.

The Starters are constantly putting out fresh content. They air five 30-minute shows a week— sometimes even going to a seven-day a week schedule– in addition to a weekly podcast and a Twitter-only show. They got to 1,000 episodes in just four-and-a-half years, meaning that they’ve done more than 200 shows per year since NBATV brought the gang aboard in 2013.

“That’s always been our calling card,” Melas told Awful Announcing. “That’s what we did when we were non-paid, and it hasn’t left us. We still have that in our DNA.”

It’s also helped that The Starters has always been a light-hearted show, even going back to when the show was being introduced.

And that mix of really knowledgeable NBA discussion and humorous shenanigans wouldn’t be so resonant here in 2018 without social media, and how the league and the show have grown in popularity in large part because Twitter and other social media have become so prevalent in society.

“The Starters and social media go hand in hand, and always have,” Skeets told Awful Announcing. “It’s been an unbelievable part of our success, in terms of just getting content out to people all over the world, be it clips or the entire show in general and how it goes up on YouTube or if people watch it on NBATV.”

Melas went a step further, saying that if social media didn’t exist today in its current form, there wouldn’t be a show at all.

“NBATV definitely realized how we sort of connected with a fanbase that was watching a second screen or was listening to podcasts along with their main product, being basketball games,” he said. “We’re definitely lucky that the timing was right in terms of social media’s popularity growing. And we jumped all over it.”

In the days where Skeets, Melas and co. were part of The Basketball Jones and worked on getting their content on The Score in Canada, they used to email links to various blogs and early online social influencers to make sure their content was noticed.

“Social media made our popularity and our connection with the NBA blogosphere, gave us a little bit of a prominent position at the time and got our name and our show out there,” Melas said.

The Basketball Jones almost didn’t get off the ground at all. After doing podcasts unpaid for about three years, aside from some paid video work for The Score, the group was almost ready to give up if The Score didn’t pick them up.

“At that point, it was becoming ‘wow, maybe we were wrong. Maybe we can’t be paid to do this for a living,’” Skeets said.

“We were all ready to quit at the end of the basketball season of 2009-2010 if it didn’t go anywhere,” Melas said. “Otherwise, I don’t know if we’d be here today. I don’t know if NBATV would’ve recognized us in any sort of capacity, because we probably would have dissolved at that point.”

Luckily for NBA fans around the world, The Score was interested in their work, and so was NBATV in 2013, leading to The Starters being born and the group moving from Toronto to Atlanta.

A major adjustment in the early episodes was getting used to being in front of a camera every day for a 30-minute show in a professional studio with cameras, lights, a control room and a large production staff.

“No matter how many shows we had in the bag— we had 1,000 shows before we got to NBATV, and hitting 1,000 now— even those 1,000 shows couldn’t prepare us for that environment,” Melas said, knowing that they’ll all improve as they continue to get on-air reps.

Melas and Skeets agreed that the shows weren’t up to par over the first couple of years on NBATV, and The Starters still has room to improve. But as Skeets mentioned, the show was never designed to be overly formal like a “60 Minutes” type show.

“We don’t pretend to be all buttoned up,” he said. “We don’t have a TelePrompTer. We’re not reading off things. Yes, we’re doing a television show, but at its core, it’s four guys still talking about basketball.”

And very few shows seem to have a better time talking about basketball than The Starters. Asked to name his favorite show or moments from the first 1,000 episodes, Skeets recalled the April Fools’ Day episodes from 2015 and 2016.

The 2015 episode had The Starters pretend they were doing the show in 1995, with a stripped down set and a debate on whether Shaquille O’Neal or David Robinson should win MVP. The 2016 show went 20 years into the future, where, as Skeets put it, “I was bald, and Leigh’s fat and Tas looks identical except he’s like a cyborg” and “The Sixers had won the championship because The Process worked.”

Skeets’ favorite moment was on Feb. 1 when Ellis had to pay for losing the group’s monthly picks contest and eat hot peppers for the ALS Pepper Challenge.

“I’ve never laughed harder on the air,” Skeets said. “When he had to bite into the first pepper and I could see the fear in his eyes, I just lost it. I was buckled over at the table laughing trying to continue to do the live show.”

Melas’ favorite show is a bit more symbolic. When the group’s native home of Toronto hosted the 2016 All-Star weekend, he was extremely proud of how far the city had come in terms of the growth of the sport in the city and how the city was perceived in the basketball world.

“The fact that in 2016, we were doing a show each and every night before the Toronto All-Star weekend was pretty surreal to me,” Melas said. “It was a come-to-Jesus moment. It was a real huge, huge moment.”

As what’s to come over the next 1,000 episodes of The Starters, Melas said that he wants the group to continue to improve and showcase their unique personalities.

“I think we’ll look back even now to these episodes and say, those were fine, but we didn’t really emote or are personalities weren’t really coming through on television the way they are now,” Melas said. “What separates everything is personality, and I think that’s ideally what we’ll look back at 2018 and we’ll say ‘oh, we were making some good shows up to 1,000, but now we’re really ourselves.’”

Skeets doesn’t think the show has hit its “sweet spot” yet, and perhaps one day The Starters will be on during or after games instead of just before. But mainly, he hopes that the show will be like NBA Inside Stuff was for him when he was younger.

“To have a bunch of kids, especially teenagers who are growing up with the NBA, that The Starters is sort of like their staple show,” Skeets said, “That’s pretty cool to me. Maybe The Starters is that show for a lot of kids who may be just getting into basketball and starting to learn about basketball and falling in love with the sport, and we’re sort of like their go-to show to know what’s going on.”