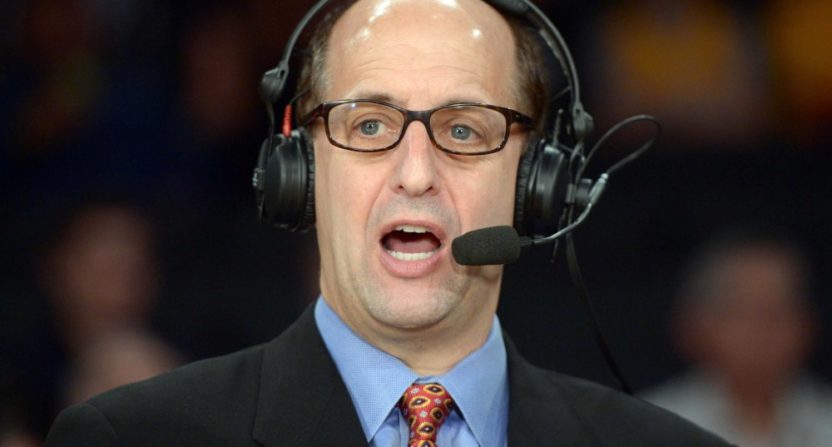 With the San Antonio Spurs hosting the Golden State Warriors Monday night, people at the Spurs’ AT&T Center were pumped. Maybe a little too pumped. Playing music during stoppages in the game is common, but at one point, the arena started blasting Metallica’s Enter Sandman…while the game was on. And this went on for over two minutes (with no Mariano Rivera appearance, even), drawing comment from ESPN announcers Mike Breen and Jeff Van Gundy. Here’s where the music started, with ESPN coming out of a commercial break just as play was resuming, and the song starting up right as the ball was inbounded:

It went on from there, continuing through another stoppage in play:

And kept going again once play started, then finally ended, leaving Breen and Van Gundy to talk about it:

Breen says “Is it my imagination, or were they just blaring heavy metal music during the course of this game?” Van Gundy responds “That was not your imagination! I’m not a connoisseur of rock music, but I like that song that they had on.”

This sequence of events got quite the Twitter reaction:

They played like half of Enter Sandman. It played through a dead ball and the announcer had to speak over it. Had me dying.

I had to walk around my house and make sure that Enter Sandman was coming from the TV.

OH MY GOD TURN OFF THE ENTER SANDMAN

This is pretty funny, especially considering that it happened in San Antonio against the Warriors, as Metallica’s long been associated with the Bay Area. In fact, Metallica’s James Hetfield and Kirk Hammett performed the national anthem before Game 5 of the 2015 NBA Finals:

But the best part of this? Someone appears to have requested “Enter Sandman” from the Spurs’ DJ: