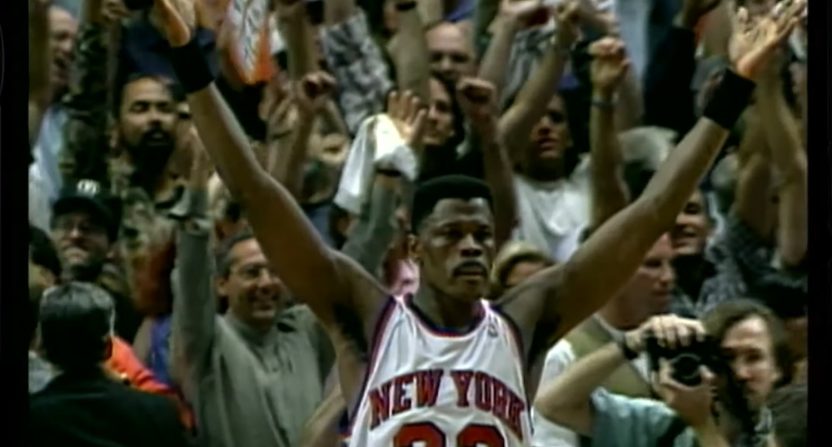 The Knicks are back. Or at least Spike Lee is so desperate for the Knicks to be ‘back’ that he decided to revive their glory years of the ’90s, a decade where they failed to win a championship.

According to Stefan Bondy of the New York Daily News, Lee confirmed to the Knicks beat writer that he’s working on a film series based on the book Blood in the Garden. Bondy didn’t offer any other details about the project, other than stating Lee informed him “it’s not a rumor” regarding the pending Knicks series.

And for Knicks fans:

Spike Lee confirmed to me he’s working on a film series based on “Blood in the Garden,” a book about the 90s Knicks.

Blood in the Garden was written by Chris Herring and released earlier this year to rave reviews, even making its way to president Barack Obama’s summer reading list. It features the ’90s Knicks, the era before James Dolan assumed control of the franchise, and the era before the organization became incompetent, forcing Knicks fans to long for the days of having their hearts broken annually in May and June.

Despite not winning a championship, the ’90s Knicks were one of the most endearing teams in the history of New York City sports. They had a superstar in Patrick Ewing who always looked like he was working harder than everyone else as sweat poured off his body. They featured role players like John Starks and Anthony Mason who came from essentially nothing. Players like Charles Oakley thrived in the team’s physical style of play that stemmed from head coach Pat Riley and was relished by fans.

The Knicks outworked and bruised their opponents to establish themselves as one of the most competitive NBA franchises of the ’90s and they ingratiated themselves to the city of New York in a way that no other team without a title has. Nobody knows this better than Lee, a lifelong Knicks fan who grew up in the blue seats, despite rooting for the Brooklyn Nets during the NBA playoffs earlier this year.

It will be interesting to see whether Lee treats Blood in the Garden as a docuseries such as The Last Dance or if it has the potential to become a dramatic series such as HBO’s Winning Time, which is based on Jeff Pearlman’s book Showtime.