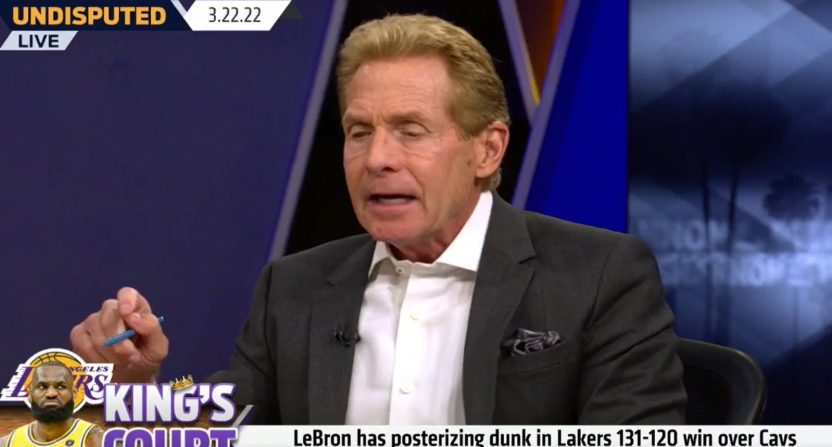 Did you enjoy hearing LeBron James say he felt bad for dunking on his friend and former teammate Kevin Love? Then according to Skip Bayless, you’ve just been manipulated.

James returned to his hometown and put on a show Monday night in Cleveland, highlighted by one of the most impressive dunks of his career; a ferocious, one-handed slam that he hammered down over Love.

After the game, James was remorseful for posterizing his friend, but the Lakers superstar couldn’t sneak his humility past Bayless.

“He is a master media manipulator,” Bayless said Tuesday on Undisputed. “He is an absolute genius in doing postgame interviews and switching the narrative. He made this dunk seem that much bigger in belittling his great friend Kev, it’s all about Kev…and that made this dunk start to feel like it’s epic!”

Not sure anyone needs LeBron James to keep playing more than Skip Bayless does pic.twitter.com/vpOrajOlQ5

Bayless is a notorious critic of LeBron James, to the point where it’s stunning to hear the Fox Sports host label James an “absolute genius” at anything, especially his handling of the media, where the Lakers superstar has opened himself up to criticism in the past for controversial acts such as The Decision.

Media prowess aside, Bayless seeks almost any opportunity to criticize James and his four NBA championships. And when NBA Twitter was universally loving this dunk, Bayless was undoubtedly scheming ways to downplay it.

“This was master media manipulation because he’s saying, ‘to be completely honest with you, ‘I hated that I had to do it to him…I didn’t mean it K Love, I love you and I take it back’…this is brilliant, masterful media manipulation,” Bayless continued.

Sorry Skip, but the celebration of this dunk is less about who was posterized and much more about James being 37 years old, playing in his 19th NBA season. Social media went wild over the slam long before James had the chance to say ‘sorry,’ and the response would have been that of equal amazement even if he bypassed the apology altogether.