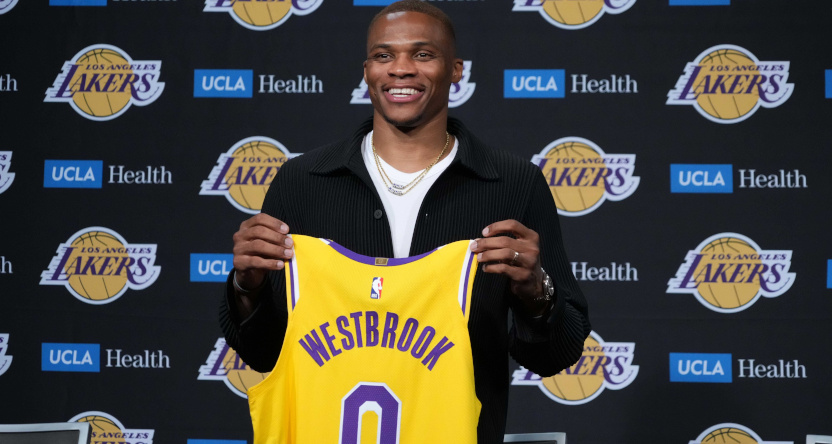 The latest athlete getting their own documentary is Russell Westbrook. Westbrook has been involved in film production before with a documentary series on the Tulsa Massacre and a film on basketball in the Crenshaw neighborhood of Los Angeles, but now he’s going to be the subject. Showtime and Religion of Sports announced Wednesday that they have a new documentary on Westbrook (seen above in a July press conference after he was traded to the Los Angeles Lakers) that will premiere on Showtime at 9 p.m. ET/PT on Oct. 15, and will also be available on their on-demand and streaming platforms as of that point. Here’s more from a release:

SHOWTIME Sports Documentary Films announced PASSION PLAY: RUSSELL WESTBROOK, an intensely personal examination of one of the most dynamic and complex figures in professional sports. The documentary, which extends Showtime Networks’ successful partnership with Religion of Sports (KOBE BRYANT’S MUSE, SHUT UP AND DRIBBLE), premieres on Friday, October 15 at 9 p.m. ET/PT on SHOWTIME and will be available across the network’s on-demand and streaming platforms at premiere.

…“I’m proud to share this documentary and give audiences an inside look into who I really am on and off the court,” said Westbrook. “There are a lot of misconceptions about me, but I’m ready to share my story and my journey with my fans.”

“The ascribed persona of Russell Westbrook, and that which viewers will come to know from this film, are quite different,” said Stephen Espinoza, President, Sport and Event Programming, Showtime Networks Inc. “PASSION PLAY unravels the yarn that has been spun and reveals the motivation and drive behind a ferocious competitor. We are proud to add Russell’s story to a series of titles spotlighting culturally relevant, contemporary superstars telling their stories – in their words – in the SHOWTIME Sports Documentary Films library.”

…“When we started this project with Russell Westbrook in the fall of 2019 and attended his first game with the Houston Rockets, we were all literally living in a different world,” said Gotham Chopra. “Two years later – three teams later for Russell – I can say there’s no one I’d rather have ridden this roller coaster with than Russ. Contrary to the persona that’s been painted about him, he’s one of the sharpest, most dynamic, caring, creative and driven people I’ve ever met and collaborated with, and I am excited to share that true version of him with the world through this film.”

The film will be co-directed by Religion of Sports co-founder Chopra (who’s been the director for many of their series to date, including the ongoing Simone vs Herself) and ROS creative director Erik LeDrew. It is executive produced by Westbrook and Donnell Beverly (who previously worked with Westbrook on Tulsa Burning). Meg Cirillo from ROS also served as a producer, while Raynard Westbrook and Rob Ford served as co-producers.

As per that release, Passion Play will include rare footage and extensive interviews with Westbrook, and will also feature interviews with former teammates including Kevin Love and Nick Collison. It will be interesting to see how this turns out, as Westbrook’s been the subject of a lot of criticism over the years, and maybe more so than anyone Religion of Sports has spotlighted to date. We’ll see what he has to say in this film.