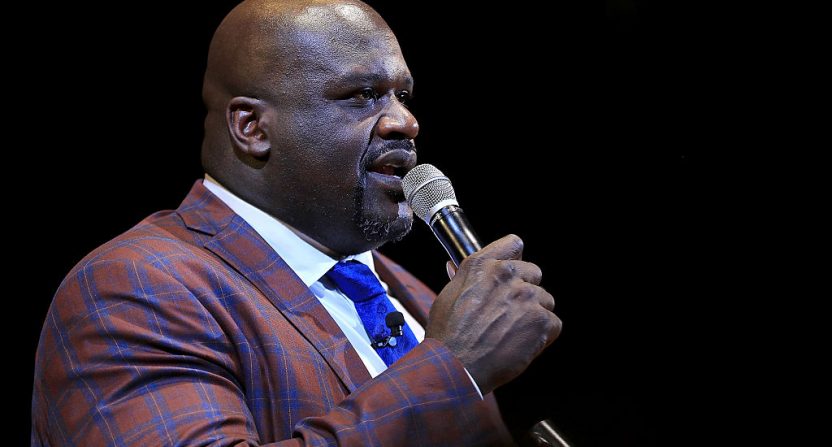 Shaquille O’Neal and JaVale McGee have been in a ridiculous feud over the last several days, after Shaq mocked McGee with a Doctor Strange-themed video showing McGee lowlights on TNT’s Inside the NBA. Shaq has been roasting McGee for years, and this video finally pushed the Golden State Warriors’ center over the edge.

This led to a Twitter war between the two, and Kevin Durant then came to his teammate’s defense, calling Shaq a “cop” and “shitty free throw shooter” who “didn’t have no skill.”

And then Shaq — of course — responded to Durant’s comments, tweeting at the Warriors’ star to mind his own business.

So, this whole thing has gotten so stupid, and it appears that it will finally come to an end… thanks to a request from Shaq’s mother.

According to The Undefeated, Shaq’s mom, Lucille, told him to “stop this silliness” and leave McGee alone:

“I have orders from the top to leave it alone,” O’Neal said past midnight on Saturday.

“No,” O’Neal said. “My mama. Just say Shaq’s mom called him, told him, ‘Stop this silliness. Leave him alone.’ So that’s the end of the beef. You won’t be hearing about it from my side anymore. Mama has spoken.”

Said Lucille O’Neal earlier Saturday evening from her Orlando, Florida, home, “It’s not funny anymore, seeing the things they’re saying to each other. They need to squash this and move on.”

The Undefeated also got comments from McGee’s mom, Pamela, who is quite angry about how Shaq has treated her son:

“He cyberbullied my son,” Pamela McGee said in an emotional, 30-minute conversation. “Totally inappropriate. Shaquille needs to lose his job or be suspended. The NBA needs to make a stand.”

Shaq says he plans to listen to his mother and never speak of McGee again:

O’Neal said his part of it ends now, that he never saw it getting this personal, and that Mama does indeed know best when it comes to this situation.

“His name will never come out of my mouth ever again.”