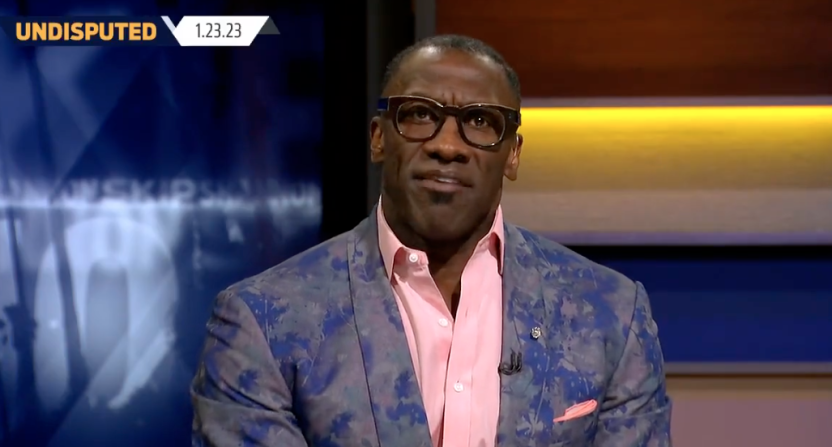 In the hot-take game, it’s never about who’s right and who’s wrong. The goal is engagement. Get people talking about what you’ve said or done. That’s all that matters. Validity, substance, and accuracy are often secondary. Stephen A. Smith, Skip Bayless, and Shannon Sharpe are highly-paid wrestling heels looking to agitate and entertain, not inform. Last weekend, however, Sharpe boldly took hot-take culture to a place it has never been before.

Sharpe made himself the subject of a topic on his own show. On Monday, the co-host of FS1’s Skip and Shannon: Undisputed apologized for a strange altercation at last Friday’s Memphis Grizzlies and Los Angeles Lakers game. Sitting courtside, Sharpe was trash-talking and members of the Grizzlies objected to what was said, including Dillon Brooks, Steven Adams, and Ja Morant. Sharpe then got into a heated discussion with Ja’s father, Tee Morant. It was initially reported that Sharpe was ejected from Los Angeles’ Crypto.com. But he returned to his seat and gave his version of what happened to ESPN’s Dave McMenamin:

Shannon Sharpe spent halftime in the tunnel with security before returning to his seat for the third quarter. He granted ESPN a brief interview explaining what happened with the Grizzlies on his way to his seat: pic.twitter.com/XZNw6sQhEG

“They didn’t want this smoke, Dave. They do all the talking and jockeying and I ain’t about that jockeying. It started with Dillon Brooks. I said he was too small to guard LeBron. He said, ‘F—‘ me. I said, ‘F— you back. He started to come at me and I said, ‘you don’t want these problems.’ And then Ja came out of nowhere talking. He definitely didn’t want these problems. Then the dad came and he obviously don’t want no problems. But I wanted anything they had. Don’t let these fools fool you now.”

"I take full accountability for what transpired. I was wrong."@ShannonSharpe apologizes & addresses his altercation at the Lakers-Grizzlies game: pic.twitter.com/RNFBydr5A6

Welcome to the devolution of hot-take culture where it’s not enough to give opinions anymore. Now you can up the ante by inserting yourself into the story. It’s absurd but also inevitable. We’ve been trending this way for some time. Blame Sharpe for pushing us over the edge. Perhaps he’ll usher in a new era of Andy Kaufman-like performance art, blurring the lines between theatre and reality. If you go too far, you can always ask for forgiveness later on your platform and watch the ratings soar.

Sharpe was a notorious loudmouth during his Hall of Fame playing career as a revolutionary tight end and hasn’t stopped being a chatterbox since his NFL retirement. Sharpe loves the sound of his voice and has turned verbosity into a multi-million-dollar career. But he’s no longer content to scream on television. He wants to yell at athletes at sporting events. What was odd is that Sharpe displayed the same boorish behavior that he had previously condemned.

ESPN video of Shannon and the Grizz + Tee Morant pic.twitter.com/wSbKc1jLz1

As cartoonish as Stephen A and Bayless can be, before TV, they were long-time journalists. For the most part, they know that some lines shouldn’t be crossed. Sharpe has no such background. Not only did he step over that line. He did so with gusto.

Sharpe’s apology sounded sincere. We’d all like to believe this was an isolated incident that escalated out of control. But it may be too late to put the genie back in the bottle. Somebody somewhere might be trying to figure out a way to boost their profile by confronting another athlete.

In the hot-take culture, it’s all a twisted game. Civility be damned. Content rules.