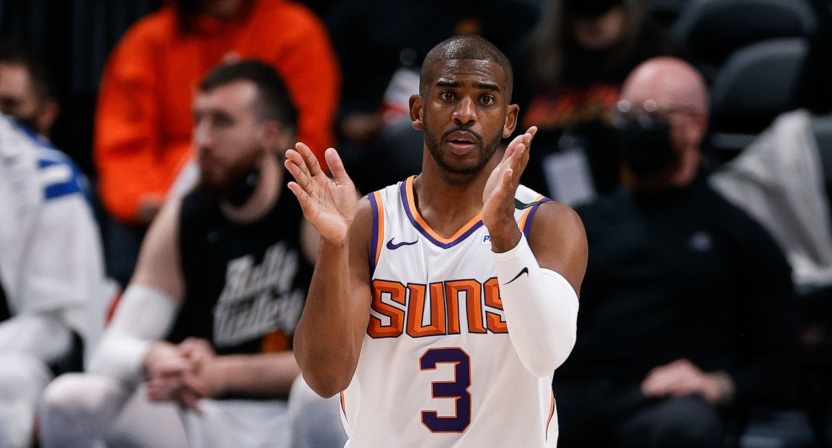 The NBA has two clear current top newsbreakers in ESPN’s Adrian Wojnarowski and The Athletic/Stadium’s Shams Charania. While other reporters have been first on some particular stories (in the case of reporters at ESPN or The Athletic, this sometimes, but not always, includes shared bylines with Wojnarowski or Charania), much of the NBA news out there is broken by either Woj or Shams (who used to work together at Yahoo), and then frequently confirmed or expanded upon by the other. So it’s certainly unusual to see a report from Charania and then a report in the other direction from Wojnarowski, and that’s what happened Tuesday with their reports on if Phoenix Suns’ star Chris Paul would play for Team USA at this summer’s Olympics.

Charania later deleted that initial tweet, and tweeted this:

To clarify: USAB official says Paul has opted against Team USA this summer. Roster has been fluid at times throughout the week. https://t.co/cQ2hmVP0oO

As per Wojnarowski’s ESPN piece, Paul was leaning towards this decision for several days:

USA Basketball had known that Paul was trending toward this decision for several days, sources said. The Suns are in the Western Conference finals against the LA Clippers, and if they reach the NBA Finals, there would be virtually no break for Paul from the end of the NBA season and the start of the Tokyo Olympics. Game 7 of the Finals is set for July 22, and Team USA’s opening Olympic game against France is July 25.

Despite that, it is possible that Charania’s “plans to commit” report Tuesday morning was a fair description of Paul’s plans at the time. People go back and forth on possible decisions all the time, especially before they actually have to announce the result. It’s also possible that the situation changed in a few hours, as there’s a lot that could change that decision.

To start with, Paul is 36, and he was ruled out of Game 1 of the Western Conference Finals over NBA health and safety protocols. He won’t play in Wednesday’s Game 2, either. So there could be issues with how COVID-19 is affecting him (if that’s what his absence is about; it may be a positive test or a close contact rather than symptoms), or issues with how his body is doing in general (with most of one and possibly two series yet to play). And there are also other potential factors, from which other players are committing or not committing to the national team to what discussions Paul has had with team officials (including managing director Jerry Colangelo and head coach Gregg Popovich) on how they might use him.

Still, at any rate, it’s certainly notable that Tuesday morning saw a report from Charania that Paul “plans to commit,” and that Tuesday afternoon saw Wojnarowski (and eventually Charania as well) report that Paul has in fact declined that invitation. That’s the sort of about-face we don’t usually see. And it’s especially notable to see that first report come from one connected insider, only to be later corrected by another.