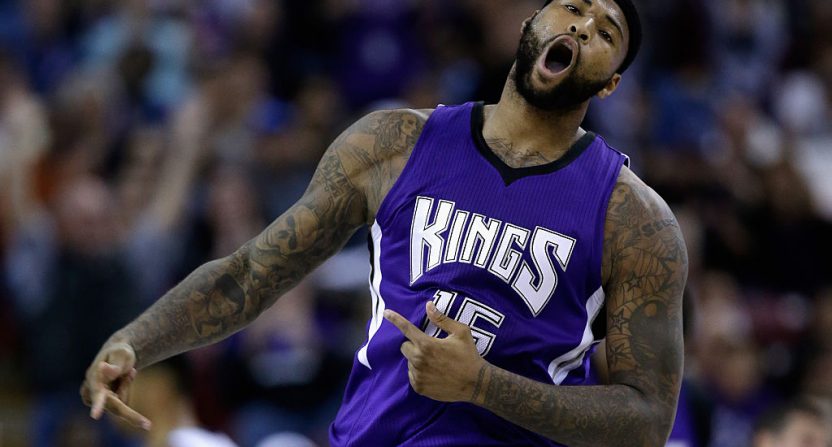 The NBA world was rocked last night as the Sacramento Kings followed through on months of speculation and finally dealt All-Star center DeMarcus Cousins. The Kings ended up trading Cousins after the All-Star Game to the New Orleans Pelicans for a hodgepodge of young players and draft picks. It could end up being quite the steal for New Orleans if they can now convince both Cousins and Anthony Davis to stay in the Big Easy for the long haul.

While Sacramento is firmly entering another round of rebuilding without a centerpiece to their franchise, at least Kings fans know that they have to move on without Cousins and everything he brings to the team, both good and bad.

While most people seem to think the Kings got shortchanged in the deal, at least one person associated with the Kings seems to be very happy that the team is moving on – longtime play by play announcer Grant Napear.

Napear went to Twitter after the trade went down and expressed his no holds barred thoughts, including saying that Cousins’ teammates hated playing with him and a dark cloud over the franchise had been lifted.

Trading DMC was an absolute no brainer! There has been a dark cloud over this franchise for years! That cloud is now gone!

The Kings were never going to win with Cousins. NEVER! This was a no brainer! I wish him well! I really do but it was time!

The Sacramento Kings just became a team again! Its time to move into the future! It's time to start winning! This gives them the best chance

And here's maybe the most important thing. Most of Cousin's teammates the past 7 years hated playing with him! That is a fact!

Wow! It’s rare that you see an announcer unload on a player like this after he’s been traded, but what’s interesting about this is that there is some history between Napear and Cousins. Back in 2013, Cousins went over to the broadcast table after a game to confront Napear, apparently because of comments the Kings announcer made on his local radio show. While Napear tried to downplay it at the time, perhaps the history between the two helped play into his tweets on Cousins’ departure.

Napear mentioned that he’s had the same criticisms of Cousins all throughout his time in Sacramento when his followers disagreed with his statements or thought it was poor form to rip him on his way out of town.

I've been talking about him for 7 years on the radio and have been telling him to his face that he needs to change! https://t.co/1J1AbzN5Kr

I'm not smashing the guy…I'm just telling the truth the same way I have been on the radio. https://t.co/EnjDG4hbz9

I suppose this adds one more interesting wrinkle to that Pelcians-Kings matchup on March 31st.