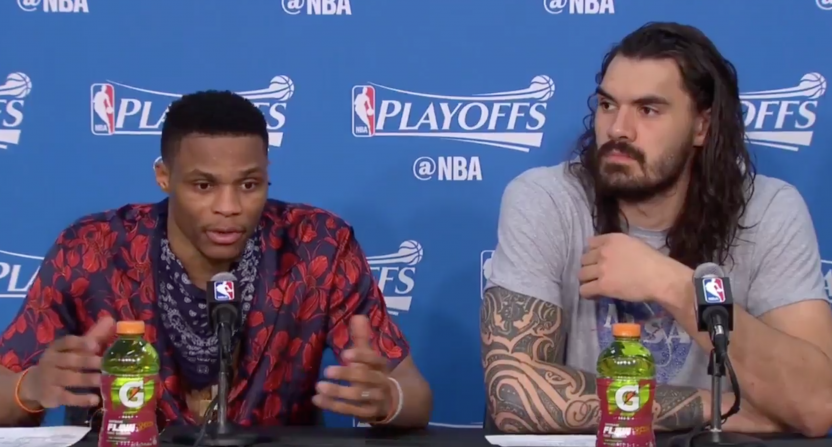 Steven, second time in three games you guys really struggled when Russell went to the bench. You were out there for part of it. What goes on when he goes to the bench, why is Houston so successful, and do you sense they sort of get an energy boost just from him going out of the game?

Before Adams could respond, Russell Westbrook cut in:

I don’t want nobody to try to split us. We’re all one team. If I go to the bench, and Steven’s on the floor, if I’m off the floor, we’re in this together. Don’t try to split us up, don’t try to make us go against each other. Don’t make it ‘Russell and the rest of the guys’ or ‘Russell against Houston.’ I don’t want to hear that. We’re in this together. We played as a team, and that’s all that matters. That’s it.

Tramel, who has quite a bit of history with Westbrook, attempted to defend his question:

Yeah Russell, I’m not trying to split you up, but twice in three games you guys have not played well at all when you’ve gone to the bench, and I’m just trying to figure out what’s going on.

Then the exchange got awfully testy:

Tramel: That may be, but I asked Steven a question

Westbrook: It’s not between me and you. Next question.

At this point it sounds like a PR staffer tried to take the microphone from Tramel, which didn’t go well:

Tramel: I had a question for Steven, and it wasn’t answered. And I don’t understand—if Steven wants to say anything, he still hasn’t said anything. If he wants to say, ‘I don’t want to answer that, fine.’

Here’s a clip of the interaction:

Russell Westbrook goes off on reporter who asks about team's play while he's on the bench pic.twitter.com/oikTf0GxCj

In a way, neither Tramel nor Westbrook is to blame here. Tramel was asking a question that anyone who has watched the Thunder-Rockets series would probably love an answer to. You can’t fault him for asking or for pressing when his inquiry wasn’t answered.

And Westbrook, understandably, doesn’t want to foster a narrative in which he’s the valiant hero and his team can’t survive without him… no matter how accurate that narrative may be.

This interaction certainly demonstrated the perils of having two players at the podium at the same time. If Westbrook weren’t around, Adams would have likely given a canned answer about how the whole team needs to step up or something like that. Instead, Westbrook felt the need to defend his teammates, and the press conference went off the rails.

PR probably could have done more to ease the tense interaction—such as re-directing the question toward Adams—but surely no Thunder employee is interested in earning Westbrook’s ire.

Considering the circumstances and the fact that Westbrook once told Tramel, “I just don’t like you,” maybe the columnist got off easy Sunday.