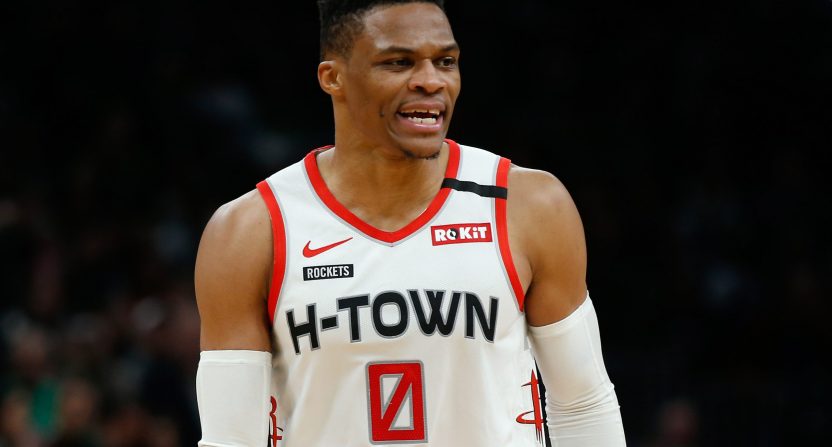 Russell Westbrook plays in Houston now, but he spent the first 11 seasons of his NBA career in Oklahoma City. That’s where he first heard the story of the Tulsa race massacre of 1921. Now, Westbrook is taking steps to get the important historical tragedy to a wider audience as he’ll be an executive producer on a new documentary series.

Titled Terror in Tulsa: The Rise and Fall of Black Wall Street, Westbrook and director Stanley Nelson’s documentary will explore an incredibly relevant moment in history, when around hundreds of black citizens were killed and a thriving black community was burned to the ground.

Westbrook has partnered with Blackfin, the unscripted producer behind ID’s I Am Homicide and History’s Brothers in Arms, on the docuseries Terror in Tulsa: The Rise and Fall of Black Wall Street, to be directed and produced by Stanley Nelson. The project will chronicle a deadly massacre in Tulsa, Oklahoma, between May 31 and June 1, 1921, where over 300 African Americans were killed and thousands more were displaced as the once-prosperous Greenwood District, called Black Wall Street by locals, was set ablaze.

Before Westbrook played for the Houston Rockets, he was with the Oklahoma City Thunder for 11 seasons, where he first learned of the Black Wall Street tragedy. “It’s upsetting that the atrocities that transpired then are still so relevant today. It’s important we uncover the buried stories of African Americans in this country. We must amplify them now more than ever if we want to create change moving forward,” Westbrook said in a statement.

Systemic racial suppression, oppression, and violence have been a staple of this country since before it was even a country, and stories like this one remain incredibly relevant today. As the 100th anniversary approaches, Westbrook’s project isn’t the only one shining light on the Black Wall Street Massacre; it’s not even the only project with an NBA star attached.

As the 99th anniversary of the Tulsa Race Massacre is marked amid nationwide protests over the killing of a George Floyd while being arrested by four former Minneapolis police officers, rival TV projects to chronicle the 1921 tragedy have emerged. Fellow NBA star LeBron James’ production company, SpringHill Entertainment, will make its own documentary about Black Wall Street and its violent demise, with Salima Koroma to direct.

“In April, @limacake (Koroma) pitched us her vision to direct a documentary about Black Wall Street and The Tulsa Riot of 1921 – one of the worst incidents of racial violence in American history. We knew we had to empower her to tell that story,” SpringHill said June 1 via its Twitter account.

As with all things this important, there’s no harm in multiple projects taking a look at it.