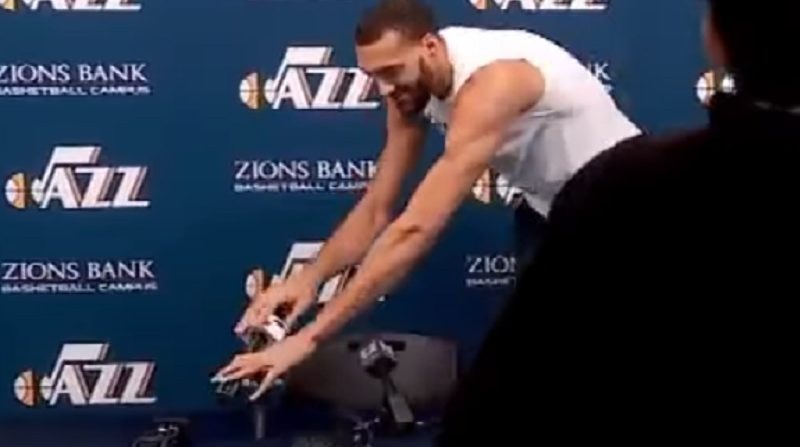 With news breaking Wednesday night that the NBA game between the Utah Jazz and Oklahoma City Thunder was postponed in light of Rudy Gobert testing positive for coronavirus, a video of the Jazz center meeting with the press on Monday took on disturbing undertones.

As described by the Salt Lake Tribune‘s Eric Walden, reporters covering the Jazz met with players after shootaround in individual press conferences at the team’s Zions Bank Basketball Center instead of on the court. Following the NBA’s restrictions on media access to address coronavirus concerns, reporters sat six feet away from players for safety measures.

While many athletes and media have viewed these policies as excessive, the need for them becomes more apparent each day. Yet while meeting with the press on Monday, Gobert demonstrated that he felt keeping a distance from reporters was unnecessary, making a point of touching the microphones and recorders placed in front of him.

Sure, that may have seemed funny at the time. It’s difficult to tell if the chuckles from reporters in the room were uncomfortable. (And speaking into those recording devices was already problematic.) But Gobert’s gesture also seemed irresponsible amid concerns of spreading coronavirus, even if there are plenty who think the fears are outsized and being exaggerated.

However, Gobert tested positive for what he joked about just days later. That resulted in Wednesday’s game being postponed and helped confirm the NBA’s initiative to suspend the rest of the regular season until more information is learned and safety for everyone involved can be ensured.

Until then, anyone who’s come into recent contact with Gobert is on alert. Players on the NBA teams that Gobert and the Jazz faced in the past 10 days — the Toronto Raptors, Boston Celtics, Cleveland Cavaliers, New York Knicks, and Detroit Pistons — have been told by the league to self-quarantine for the next two weeks. The final game on Wednesday’s NBA schedule, between the New Orleans Pelicans and Sacramento Kings, was postponed when it was learned that referee Courtney Kirkland had officiated Monday’s Jazz-Raptors game and come into contact with players who could be infected.

And as you could expect, reporters who cover the Utah Jazz — whose equipment may have been touched carelessly by Gobert — were suddenly very concerned about their health and well-being. Such fears were initially voiced by Tony Jones of The Athletic, in a tweet that has since been deleted. Here’s a screencap:

Jones’s sentiment was understandable and captures the uncertainty among anyone even remotely involved with the situation. However, though the content of the tweet is very real and human, it could also be viewed as unprofessional and provocative, which is likely why it was deleted.

Deseret News reporter Sarah Todd also expressed her concerns Wednesday as she and fellow media were left at Oklahoma City’s Chesapeake Energy Arena wondering what to do next.

We do not know how or when we’ll be tested, we don’t know anything other than we spend every day around these guys. And that an entire arena was emptied. Now we are sitting in the depths of the arena waiting to know our next step.

Those are just two media members publicly voicing their concerns on social media. (KUTV sportscaster Dave Fox posted the Gobert video on his account, as well.) Whether or not Gobert’s actions could have further consequences remains to be seen.

Obviously, plenty of others — whether it’s media, team or facility personnel, and fans, along with the entire NBA — are now worrying about whether their health has been compromised. If coronavirus fears weren’t taken seriously by some, Wednesday night’s events — President Trump’s speech to the nation, Tom Hanks announcing he and his wife Rita Wilson have tested positive, the NBA deciding to suspend the rest of the season — may have brought those concerns into sharp focus.

UPDATE: Gobert apologized on Thursday to those he “may have endangered.”

I want to thank everyone for the outpouring of concern and support over the last 24 hours. I have gone through so many emotions since learning of my diagnosis…mostly fear, anxiety, and embarrassment. The first and most important thing is I would like to publicly apologize to the people that I may have endangered. At the time, I had no idea I was even infected. I was careless and make no excuse. I hope my story serves as a warning and causes everyone to take this seriously. I will do whatever I can to support using my experience as way to educate others and prevent the spread of this virus . I am under great care and will fully recover. Thank you again for all your support. I encourage everyone to take all of the steps to stay safe and healthy. Love.