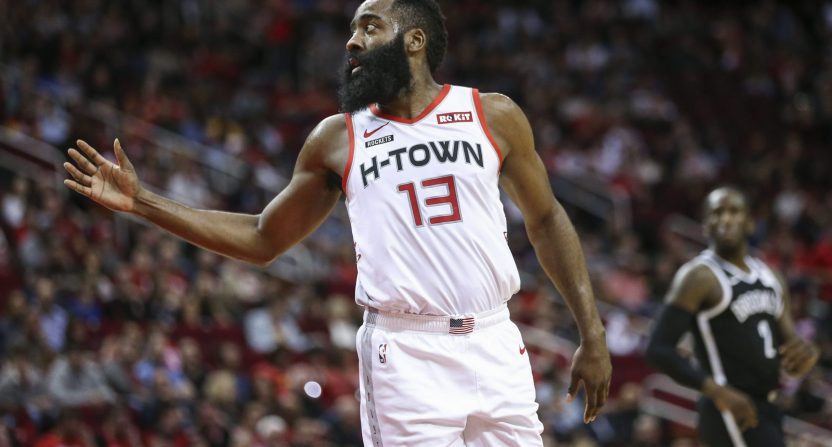 The NBA’s league-wide opening night Wednesday (following two games Tuesday) will now have one less game, with the Houston Rockets-Oklahoma City Thunder game postponed. After ESPN’s Adrian Wojnarowski reported Wednesday afternoon that the Rockets had sent John Wall, DeMarcus Cousins and Jae’Sean Tate home due to COVID-19 contact tracing, that rookie Kenyon Martin Jr. was self-isolating and receiving further tests after a positive test, and that the league was evaluating James Harden’s status after Black Sports Online published a video of Harden at a maskless gathering in a club, the league eventually decided to postpone the game. Shams Charania of The Athletic and Stadium relayed that news:

Here’s more from that ESPN piece on what’s going on with the Rockets:

Wall, Cousins and Martin were among Rockets players gathered on Tuesday evening at a player’s apartment away from the team facility getting haircuts, sources said. The Rockets listed Martin as “not with the team/self isolating” for the opener against Oklahoma City on Wednesday night in Houston, and sources told ESPN that he was awaiting further test results to confirm the original positive.

Rockets rookie Jae’Sean Tate is also among the players who were sent home Wednesday morning because of contact tracing, sources told ESPN.

And as Wojnarowski tweeted later, this decision came with Harden ruled out, and with the Rockets not having the eight players needed:

After the NBA declared James Harden "unavailable due to violation of health and safety protocols," it is still unclear to both Harden and the Rockets how long he'll be unavailable or whether he'll face league punishment, sources tell @ramonashelburne and me.

The National Basketball Association game scheduled for tonight between the Oklahoma City Thunder and the Houston Rockets at Toyota Center has been postponed in accordance with the league’s Health and Safety Protocols.

Three Houston Rockets players have returned tests that were either positive or inconclusive for coronavirus under the NBA’s testing program. Following the contact tracing protocol, four other players are quarantined at this time. Additionally, James Harden is unavailable due to a violation of the Health and Safety Protocols. All other Rockets players were tested again today, and all returned negative results. Houston has one additional player who is unavailable due to injury.

As such, the Rockets do not have the league-required eight available players to proceed with tonight’s game against the Oklahoma City Thunder.

Of course, there are still 12 other NBA games Wednesday, including national broadcasts on TNT (Milwaukee Bucks-Boston Celtics, 7:30 p.m. Eastern) and ESPN (Dallas Mavericks-Phoenix Suns, 10:30 p.m. Eastern). And Rockets-Thunder was only going to air on the teams’ local RSNs and on League Pass, so at least this isn’t a national game going down at the last second. But it’s still a rough start to the league’s second night of non-bubble regular-season play since March, and it illustrates some of the challenges that may be ahead in trying to play a season in home markets.