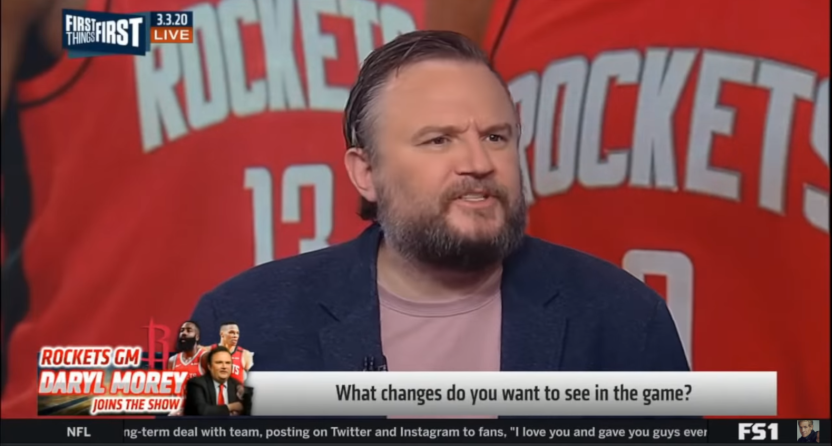 Plenty of broadcasters across sports have been criticized for taking pokes at current approaches to the game that don’t fit with their thoughts on how it was in their day. That conversation has been particularly strong in baseball over the years, from Joe Morgan to John Smoltz and Ron Darling, but it’s also popped  up in other sports, including basketball. And Houston Rockets’ general manager Daryl Morey went in hard on NBA broadcasters for this on FS1’s First Things First (with Nick Wright, Kevin Wildes and Jenna Wolfe) Tuesday. Here’s the clip:

And a transcription of Morey’s key comments, via Ben DuBose of USA Today‘s RocketsWire:

“Right now, if you tune into a lot of NBA telecasts, the announcers are hate-watching their own game. It’s crazy. You’ll tune in, and they’ll be like, ‘Well, what’s happening here? They’re shooting too many 3-pointers. Back in my day…’

Imagine the NFL if [Tony] Romo was basically like, ‘Oh, this passing is not going to work. Where’s my cloud of dust? Where is it?’ Literally, it’s the whole game. That’s NBA games right now. ‘Where is my cloud? Why aren’t we smashing that ball in there?’

You tune into any NBA game, that’s what you get all night. I think we’re going to fix it over time, but right now… [sigh]

…The other thing that happens, you tune in, and they go ‘Well, why are we watching tonight? Nothing matters until the playoffs. Nothing.’

On some levels, Morey has a point there. There absolutely are some NBA broadcasters who are constantly critical of new approaches, even when they’re working well, just because it’s not what they’re used to from their playing careers. And some of those broadcasters have further personal reasons to denigrate what’s working for particular teams; ESPN/ABC’s Mark Jackson is a particular example there, as he’s continually bashed the Golden State Warriors (and even those who have said good things about them) since his 2014 return to ESPN  after the Warriors let him go.

Reports since then have illuminated the many, many knocks on Jackson’s coaching stint there, and the team has done significantly better under Steve Kerr (three championships and two further Finals appearances in five years versus not even a conference finals appearance in three years under Jackson), but he’s still had a whole lot of criticisms for their three-point focused approach (which has clearly paid off). And he’s not the only one who’s bashed the modern game for what appears to be driven by “back-in-my-day” reasons; Charles Barkley (a studio analyst rather than a game broadcaster, but a highly prominent studio analyst) has done the same on multiple occasions, including comments specifically targeted at the Rockets, as have others.

But Morey’s comment that “You tune into any NBA game, that’s what you get all night” feels like it’s going way too far. Not every broadcaster is “hate-watching their own game,” and generalizing this to everyone calling NBA games is unfair. And it’s also worth noting that Morey comes with his own biases here; his Rockets have adopted an even more extreme three-point or layup approach than other teams like the Warriors,  so they draw more criticism than your average team, and it hasn’t always worked out for them.

The Rockets’ specific approach hasn’t even produced a NBA Finals appearance yet, much less a title, and it isn’t accurate to describe their particular philosophy as universally applied across the modern NBA or to say that criticism of the level they take this to equals criticism of the league as a whole. Yes, certainly some of the criticisms of the Rockets are too based in nostalgia for different eras, but not all of them are, and not everything critical of them can be dismissed as “back in my day” comments.

Morey’s complaints about “Nothing matters until the playoffs. Nothing,” talk are also interesting, and that talk definitely has existed. In fact, Barkley in particular has gone even further than that, saying in October 2017 that “The toughest thing for me is I have to get on TV and fake it for seven months that it’s not going to be the Warriors and Cavs in the finals again.” That goes beyond “the regular season doesn’t matter” to even “the non-Finals parts of the playoffs are a foregone conclusion.” But you know, Barkley was absolutely right that year (which marked LeBron James’ last season in Cleveland, and the end of the Cavs’ success for the moment).

And again, not every analyst is saying “nothing matters until the playoffs,” but the ones who are have somewhat of a point. The field’s more wide open than it was in 2017-18, especially with the Warriors’ current struggles, but the regular season probably still isn’t that significant; there’s a good argument that it will probably be one of the top six or seven teams (the latter would include the Rockets) in the standings that wins the title, and those teams are all playoff-bound at this point, and their particular seeding may not matter that much. And sure, Morey can be annoyed about analysts claiming the regular season isn’t that important, but they have a good claim to be speaking the truth.

And this argument that people will tune out because an analyst says that really is disrespectful to the NBA’s own fans. That implies that those fans don’t already realize the regular season doesn’t matter much, and that’s not the case. Many of the people who are watching regular-season NBA games (and regular-season games in most sports) are well aware of the less-than-total importance of the regular season and have other reasons to watch (enjoyment of the game, enjoyment of particular players, watching how players and teams perform in advance of the playoffs, etc).  They’re not going to tune away just because an analyst mentions that the regular season isn’t that significant. (And really, the better reason to say analysts shouldn’t say this is that it’s already incredibly obvious and doesn’t need to be discussed yet again.) But the really dumb part of this comes from Morey’s later claims about this in regard to other leagues, specifically the NFL.

“I think we have the best game that highlights our best athletes in the world, every single night. It’s almost like cognitive dissonance. People tune in, and they’re being told how they shouldn’t watch, and how it’s not a fun game to watch. It’s bizarre to me. The NFL would never let it happen, and I don’t understand it.”

Yes, the NFL has been known to meddle with who networks assign to call it, from briefly banning Mike Tirico from Thursday games thanks to an asinine “top team” rule to alleged involvement with Bob Costas being taking off Super Bowl coverage for comments critical of concussions. But they go well beyond other leagues in that meddling, and even they haven’t forced broadcasters out for “back in my day” comments; those can still be heard from Troy Aikman and others relatively regularly, and maybe the most obvious removal of a “back in my day” guy was CBS shifting Phil Simms to the studio to bring in Tony Romo, something that wasn’t reported as NFL-instigated. And it’s notable that Simms is still a high-profile studio analyst who still makes comments critical of some current approaches (which, as in the NBA, isn’t necessarily critical of the whole league), so “The NFL would never let it happen” is counterfactual.

Overall, some of Morey’s complaints here have some merit. There are some NBA broadcasters whose criticisms seem to go beyond “I don’t think this will work well because of X” to “This is the wrong way because we used to do it differently.” That’s the same in MLB, and it remains an issue with some broadcasters there. But generalizing that to all NBA broadcasters is going too far, as is generalizing criticisms of the Rockets’ particular current approach to criticism of the modern NBA (they remain one of 30 teams, many of whom approach the game quite differently).

And this really gets over the top when it comes to who Morey puts the impetus on to correct it. He doesn’t say this is an issue for the networks, who could make reasonable editorial changes to emphasize different voices and deemphasize some of those who seem critical without basis (in particular, there have been plenty of people calling for that with Jackson for a while, even though no change seems imminent there), but rather chalks it up to the league. And while leagues do express opinions to networks about the way they’re covered (and sometimes go beyond that into calling for personnel moves, as with the NFL; that’s usually about overall perception of an analyst rather than specific comments, though), calling for them to tell networks to have analysts only comment a certain way feels very heavy-handed.

And beyond that, it’s funny that it’s Morey who’s calling for the league to censor its broadcasters.  After all, Morey is the guy who tweeted support for Hong Kong protesters, sparking an international trade war that’s cost the NBA “hundreds of millions of dollars.” And the league and commissioner Adam Silver have commented that Morey can express his own views (even if not always in as such strong terms as many free speech advocates would prefer), and their qualified support of Morey (and refusal to punish him for a personal tweet) has drawn massive backlash from Chinese media and the Chinese government for the lack of censorship of an employee. So it’s at least somewhat ironic that Morey now seemingly wants the league to regulate what its broadcasters say, and to have them claim everything’s great rather than expressing their opinions on how teams should play and if the regular season matters. Free speech always does seem more important when it’s your own free speech.