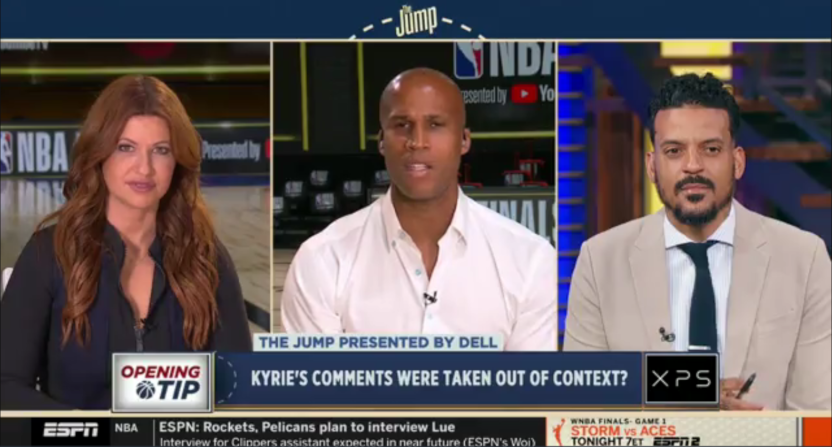 Brooklyn Nets’ point guard Kyrie Irving made a lot of headlines this week for his comments on the first episode of teammate Kevin Durant’s new “The ETCs” Cadence13 podcast, including his discussion that the Nets (who just hired Steve Nash as head coach last month) might have more of a collaborative model, with comments like “I don’t really see us having a head coach. KD could be a head coach, I could be a head coach [some days].” That podcast also featured Irving being pretty candid and interesting on a number of fronts, from discussions of his public perception to talk about the history of his relationships with Durant and with Kobe Bryant to talk about Irving’s desire to take the last shot. And that last topic in particular led to media discussion, backlash to the media from Irving, and backlash to Irving’s comments from ESPN analyst Richard Jefferson.

After that podcast came out and picked up media coverage, Irving went off on the media for covering it. He particularly went after media coverage of his “I felt like I was the best option on every team I played for down the stretch” line,  and “This is the first time in my career where I could look down and be like, ‘That [expletive] can make that shot too, and he’d probably do it a lot easier.” Many media members justly discussed those remarks in terms of what that meant about Irving’s feelings about former teammate LeBron James, a four-time NBA MVP and three-time NBA Finals MVP. And that led to Irving going off on the media in a social media video, posted to Twitter by TheNBACentral:

Kyrie Irving fires back at the 'clickbait society' pic.twitter.com/xVV7fCHIxc

Here’s a transcription of that, via Nick Friar at USA Today’s Nets Wire:

“Why must it always be brotha against brotha? Why? If I’m addressing anyone, I’ll say their name. Come one y’all, don’t listen to the false narratives. Let people live their lives. It’s just a game. Talk about the art. Talk about the sport. You talk openly. You talk freely. But, because we live in a clickbait society it becomes something bigger. You don’t have to defend it. That’s just what media is. It’s entertainment. I’m not going to let it put me against anybody anymore at any point, ’cause that’s what it’s about. We talk freely and openly, and that’s our society. Say how you feel, don’t have to put me against anyone else. It’s never been about that. It’s about the love. Peace.”

On ESPN’s The Jump Friday, Jefferson delivered a passionate criticism of Irving’s “clickbait” comments, referencing his own podcasting work and how he makes sure guests are comfortable with their comments before they air.

Here’s a transcription of Jefferson’s comments (to host Rachel Nichols and fellow analyst Matt Barnes) across those three clips:

“Look, my thing is this. Matt, you host a podcast. I host a podcast. A lot of times, when we get people on our podcasts, we say this, ‘Hey, talk freely. We’re going to talk it out. We’re just going to say whatever. And I’m going to go back and edit out anything. I’ve had Kyrie on my podcast multiple times, and then, like, later that day, I’m like ‘I took out that part, and I took out that part,’ just because we don’t want any drama.”

“The issue with this is, you went on Kevin Durant’s podcast, and you were saying these things. So we in the media are not creating the clickbait. You and Kevin Durant are creating the clickbait. That’s the only issue with that. And I protect the guests. Matt, I’m pretty sure you protect the guests. It’s like ‘Hey, we’re going to talk for an hour and a half, anything that might be a little too off-center, we’re going to take it out.’ And we just want people to focus on the content. So you have to be able to have someone look at this. And we’ve often offered the content, like, ‘Hey, listen to this, make sure that everything is cool before we put this out.'”

“And that’s my only issue. A lot of times you protect guests. But he can’t say that this is just clickbait when he’s creating the content that is allowing for the clickbait, and then coming on with ‘Oh, you guys are just in it for the clickbait. Clickbait world.’ That’s the only part where it’s hard for me to defend that.”

This is an interesting series of comments from Jefferson on multiple levels. First, Jefferson is absolutely right that it’s a little rich for Irving to take so much exception to very predictable media coverage of inflammatory things he decided to put out there on a teammate’s podcast. Anyone in the world could have told Irving that suggesting that his current Nets’ teammates are more qualified to take late-game shots than LeBron would have drawn a media firestorm, and that’s before you get to any of the other topics he addressed (including the coaching discussion). And Irving definitely chose to say those things.

And if Durant is following what appears to be a common podcasting principle amongst current and former NBA players, Irving and his representatives would even have had a chance to review those before publication. It’s not clear if Durant allows that kind of guest revision on his podcast, but both Jefferson and Barnes do, as per this conversation. So if that happened, that’s a further level where Irving would have had a chance to self-censor and chose not to. And that would further weaken his “clickbait” criticisms of the media; if he not only said these things, but then elected later to let them go to air, it’s pretty weak to get upset that people are covering them in a predictable manner.

It’s also notable to see Jefferson talking about the level of after-the-fact self-editing he grants to his guests, though. To be clear, this isn’t necessarily terrible; podcasts are not live interviews and are not presented as such, and many of them (but not all) are edited after the fact. And even reporters’ conversations with sources often feature discussions about what is and is not on the record (although that’s usually before the fact rather than after it), so the idea of remarks made that aren’t for public consumption is not new.

But Jefferson’s remarks here, and Barnes’ agreement with them, does provide some interesting information about how those two particular podcasts are made. And it’s not necessarily a wrong approach to take, and it likely helps them continue to nab prominent guests. But it’s worth keeping in mind when listening to those podcasts that they may not involve everything the guest said to the hosts. Rather, they’re a sanitized version of that conversation, one unlikely to provoke a lot of “drama.”

And that can be fine for what it’s worth. But there’s also maybe some merit to podcasts like this Durant-Irving one putting out comments that are more interesting and are more likely to lead to some discussion. Jefferson is right that Irving’s “clickbait” criticisms are off base given how Irving chose to put these remarks out there, but the takeaway here shouldn’t necessarily be “Sanitized, non-controversial podcasts for everyone!” either. And if Durant’s podcast is going to continue to be a little more raw, and to put out some things that might lead to “drama,” that might make it a more interesting listen than some of the other ones out there.