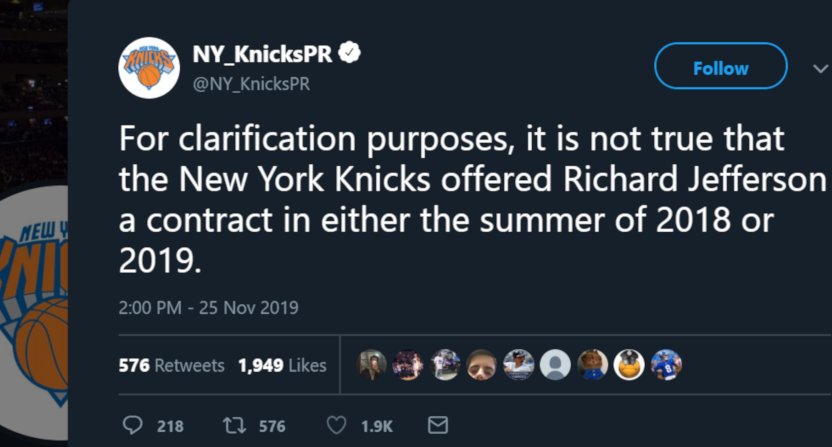 The latest round of drama around the New York Knicks (not something that’s in short supply) revolves around comments Richard Jefferson made on the YES broadcast of the Nets-Knicks game Sunday night. Following his retirement after the 2017-18 season, Jefferson turned to media work, including national work with ESPN, work with the Pac-12 Networks, and a role as a YES game and studio analyst for some of their Nets’ broadcasts. It’s in his game analyst role that he made headlines this time around, saying during the game that he knew it was time to retire when the Knicks offered him a contract:

Richard Jefferson said he knew it was time to retire when the Knicks offered him a contract ? pic.twitter.com/NbtevFeoqP

“First of all, anybody that questions my loyalty to the Nets, I refused to play for the Knicks. Jason Kidd, Kenyon Martin, they don’t really care. Me, I was the one person that said ‘Knicks? No, I’ll retire.’ That’s why I retired, they were the one team that offered me a job, so I decided to retire.” Ian Eagle asks “Is this a true story?” and Jefferson goes “It’s true, that’s why I decided to retire. It’s true.” Jefferson goes on to say “I just knew it was time; when the Knicks were looking for me to play for them, I knew my time in this league was over. I knew my time was done. I was like ‘I’d rather retire than go do that.’ I’d rather come broadcast for the Nets than play for the Knicks, so I called it a day.”

Of course, Jefferson has proven willing to say just about anything, and the particular situation here (a Nets broadcast of a Nets-Knicks game, with Jefferson already a former Nets player playing to a crowd of Nets fans) added further grains of salt to take this with. And Jefferson himself suggested afterwards on Twitter Sunday that he might have been joking.

But what made this really funny was how the Knicks’ PR team then decided to weigh in on Twitter Monday to insist they never offered Jefferson a contract:

For clarification purposes, it is not true that the New York Knicks offered Richard Jefferson a contract in either the summer of 2018 or 2019.

That led to a lot of roasting of the Knicks:

for clarification purposes, you remain astoundingly bad at relating to the public

Feeling the need to put this tweet out is embarrassing enough.

Follow-up question: is it true that JD and the Straight Shot “is the most authentic blues experience you’ll get outside the Delta, a rollicking good time for all”?

That also led to Jefferson himself weighing in on their tweet:

Even if Jefferson hadn’t been joking around (which it certainly appears he was), there’s all sorts of ways that his comments could have been largely true even without the Knicks formally “offering him a contract”; plenty of teams reach out to see if free-agent players have interest in joining them before extending a formal contract offer. So this is an odd thing to try and correct on Twitter anyway. And making this kind of effort to “correct” it only adds to the perception that the Knicks (and owner James Dolan) really, really care about what people are saying about them.

Yes, there’s a good chance that the Knicks are correct and they never offered Jefferson a contract. In Jefferson’s last NBA season, at age 37 in 2017-18, he played in just 20 games for the Denver Nuggets, averaging 8.2 minutes and 1.5 points per game, so that didn’t exactly make him a prime target at that point. (You never know with the Knicks, though, and they went just 17-65 last year in a tanking strategy blatant enough that NBA commissioner Adam Silver called it “corrosive,” so maybe they did want to bring in Jefferson.)

So yes, the Knicks’ tweet here “for clarification purposes” is probably accurate. And it’s somewhat understandable why they felt they should do that; they were getting some criticism over Jefferson’s remarks, and if they didn’t actually try to sign him, it must have been annoying to hear that. But sending that tweet at all was quite the move. Sure, a few people were dunking on them over Jefferson’s story, but the PR tweet drew way more attention (218 replies, 576 retweets and over 1,900 likes as of 6:10 p.m. Eastern Monday) and way more jokes. So this one may not have been worth trying to correct.