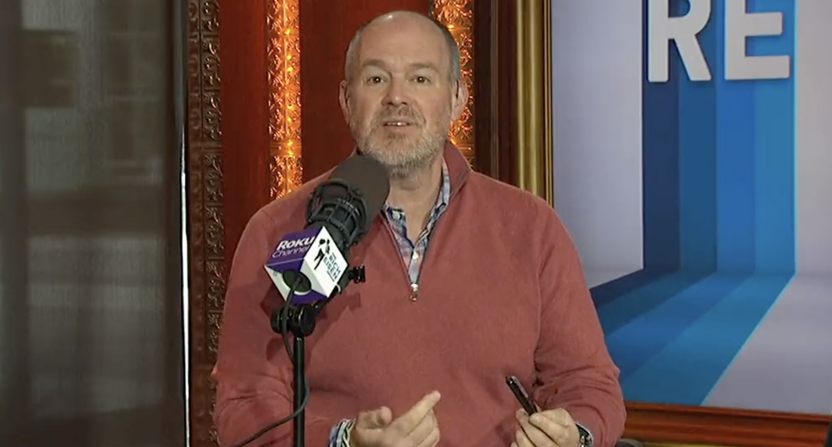 Brooklyn Nets star Kyrie Irving has refused to take down a link on his social media accounts promoting the film “Hebrews to Negroes: Wake Up Black America,” which includes various antisemitic tropes and notions (not to mention it comes a week after amplifying dangerous conspiracy theorist Alex Jones). And so, he continues to receive backlash for it.

Despite being justly condemned by everyone from Kareem Abdul Jabbar, to Nets broadcaster Richard Jefferson and team owner Joe Tsai, Irving has maintained that he did nothing wrong while also refusing to answer straightforward questions when asked directly.

On Monday’s episode of The Rich Eisen Show on Roku, Eisen played a clip of Irving’s showdown with ESPN’s Nick Friedell, in which Irving said “you’re dehumanizing me” when the reporter kept asking him to clarify why he stands by the post and movie. In doing so, Eisen, who is Jewish, says that that’s exactly what Irving is doing to people like him.

"I know what anti-Semitic tropes look like, what they sound like and what they feel like."@richeisen on the dangerous behavior of @KyrieIrving:#NBA  #NBATwitter pic.twitter.com/N70dM8Gbg1

“You’re dehumanizing me, Kyrie. I’m a Jewish man,” Eisen said. “Descendant of people who died in gas chambers and got incinerated by Nazis. You’re dehumanizing me by putting on your platform a book and movie that is filled with antisemitic tropes that are designed or eventually lead to the dehumanization of me, and my children, and my ancestors who died because they were Jewish.

“It’s not funny, and I can’t believe I have to tell someone from Duke who’s clearly smart enough to know — you’re not promoting it with a tour — but when you put it in front of four million people who might not have known about it, you’re promoting it. You’re giving it your platform. When you give it your platform, you may not agree with all the things of the people who created the book or movie or theory that you say is true, you’re now owning all of that person’s opinions.”

Eisen added that Irving doesn’t seem to understand the platform he has and the impact it carries when he shares demonstrably false information.

“Yeah, it’s offensive, and it’s also really scary, because it’s normalized by somebody who puts a ball through a hoop and is very famous and generationally rich for it, and you have a platform because of it, and it’s normalized,” Eisen said.

Being a “free thinker,” Irving probably isn’t listening to Eisen and others, seeing feedback as an attack or as something that would require him to admit he doesn’t know everything. And that’s not how people like that work, unfortunately.

Kyrie is like most faux intellectuals. They don’t read, so their whole mantra is rooted in YouTube clips. They don’t explain the things they say because their attitude is based on the idea that they speak and others listen. They don’t want dialogue because they’re not good at it.