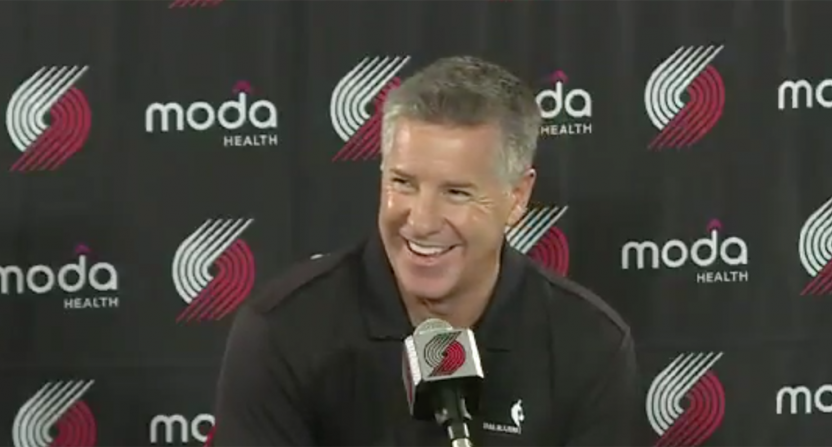 Following the Trail Blazers’ blowout, season-ending loss to Golden State, Oregonian columnist John Canzano called Portland’s culture into question. A reporter asked Blazers general manager Neil Olshey about the column at a press conference on Tuesday, and he immediately cracked up before lighting up Canzano:

Olshey: Clearly the motivation was to abuse privileges as a media person so he could get tickets for his relatives and pics with Steph Curry pic.twitter.com/2NeUYbybaE

In the column, Canzano made several silly claims, nitpicking reasonable decisions the franchise has made. Among them, he implied that the Warriors are the best team in basketball because Durant and Curry are polite and appreciative people, not because they are two of the best basketball players in the world:

Then, the guy making $26.5 million a year did the most interesting thing — he slid the headphones off his ears and he walked around shaking hands with each of the half dozen ball boys and staffers who had chased balls down for him.

“Thank you, I appreciate it,” the eight-time NBA All-Star said to each of them.

Rather, the act Curry pulled with the Moda Center ushers who work the route between the court and the visiting locker room, making $12 an hour.

Curry walked by each of them on Monday night, stopping to shake their hands and thank them. Charlie, a long-time Moda Center staffer who works the spot just beyond the darkness of the tunnel opening, held up his hand and examined it after Curry passed. He announced, “This is the hand that Steph Curry shook.”

Ask Charlie what he thinks the most impressive thing about the Warriors is. Bet he doesn’t start the conversation with how gifted and deep the roster is. Bet he talks about Curry’s leadership.

According to Jason Quick, a Blazers beat reporter for CSN Northwest, Canzano didn’t spend a single second in the Blazers locker room this season. Quick was also the reporter who asked Olshey about the Oregonian column on Tuesday.

FWIW: A column on culture from someone who spent – no exaggeration — zero seconds in Blazers locker room or practices this season. https://t.co/BQJR8mFbGV

Once he got his laughter under control, Olshey responded to Quick:

“I want you to know I was completely oblivious to [the column] until someone showed me your tweet, which I said I don’t understand what this means. And then I had to go back and read that.

“I was glad that it was written by someone who came to two games all year. And clearly the motivation was to abuse his privileges as a media person with his pass so that he could get tickets for his relatives and pictures taken with the opposing point guard in the opposing point guard’s jersey. ‘Cause clearly that’s an unbiased opinion. Right? That’s an impartial observer talking about our roster when he has his nephew in a Steph Curry jersey taking pictures with Steph Curry. Sure.

“You know, look, I’m very comfortable with where our culture is.”

Canzano tried to defend his column on Twitter, but didn’t get much love.

Here’s one part Olshey left out of his response that I’ll add in. Regardless of the legitimacy of the column’s thesis, it’s much, much easier to write this column at the end of a season when a team has lost. Remember that this Blazers team made a late push to get into the playoffs before getting bounced by one of the best teams of all-time, and I didn’t see any Canzano columns questioning Portland’s culture then.

If Canzano had more guts, this column would’ve been published earlier in the season. That wouldn’t have made him right, but it would’ve reduced his cowardice.