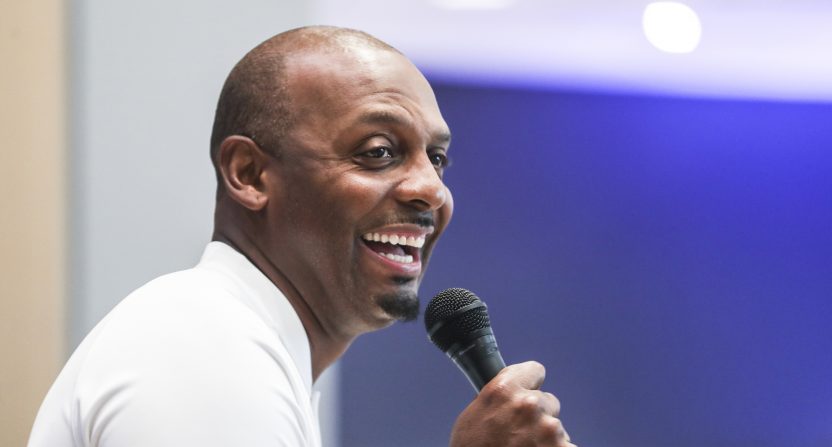 More and more sports documentaries are coming out all the time from a variety of outlets, and one of the latest entrants into that space is NBA Digital with the “Players Only Films” series, distributed on Facebook Watch. These films began in June with the “Next Up” series, featuring NBA on TNT analyst Kevin Garnett mentoring prospects Mo Bamba and Jaren Jackson Jr. ahead of the NBA draft, continued in August with “Something in the Water” about Luka Dončič & Džanan Musa and how they fit into the tradition of players from the former Yugoslavia heading to the NBA, and now they have a new installment looking at a former NBA star instead of a young player.

This time around, the film (released Wednesday on Facebook Watch) is called “One Cent,” and it’s exploring the career and after-career impact of Penny Hardaway. Here’s a trailer for it:

The full film clocks in at around 49 minutes, and as per a release, it covers everything from Hardaway’s journey to the NBA to his current coaching career:

Hardaway’s story starts off in his hometown of Memphis with the talented point guard starring at Treadwell High School and the formerly-named Memphis State University. He would go on to be the third overall pick in the 1993 NBA Draft before being sent to the Orlando Magic in a draft-night trade for first overall pick Chris Webber. Together with Shaquille O’Neal, the pair of rising stars would lead the Magic to the 1995 NBA Finals. A series of leg injuries would hamper and eventually derail Hardaway’s professional career, leading him to the Phoenix Suns, New York Knicks and Miami Heat.

Following his playing days, Hardaway returned to Memphis to help longtime friend Desmond Merriweather, who coached their former middle school. Soon, he would take over the reins as Merriweather battled and later succumbed to colon cancer. Hardaway ultimately led Lester Middle School to success before moving on to East Memphis High School and the University of Memphis as head coach.

It’s interesting to see these kinds of longer documentaries run on Facebook Watch, as much of the video content on Facebook is pretty short (partly because many people are consuming it on tablets or mobile), and even most of the many, many sports shows and series they’ve picked up have been focused on shorter episodes. Even some previous documentaries there, like Inside The Madness on Kentucky basketball, NASCAR’s Behind The Wall: Bubba Wallace, Tom Versus Time on Tom Brady, and the Arizona Cardinals’ Flight Plan, have gone with the approach of several shorter episodes instead of an all-in-one documentary, and the Next Up entries in this series were both under 13 minutes.

But Something In The Water ran around 43 minutes, and it has 4.4 million views as per Facebook (versus 3.2 million for Bamba, but 5.6 million for Jackson). Of course, those are more likely total plays of any length than an indication of average watch time or a suggestion of who made it all the way through, and Facebook video stats should obviously be taken with a whole shaker of salt at this point, but there does seem to be a not-insignificant audience for these. We’ll see where NBA Digital goes with the series from here, and we’ll see if others follow their approach of longer single-part documentaries on this platform, or if the episodic approach remains the standard.