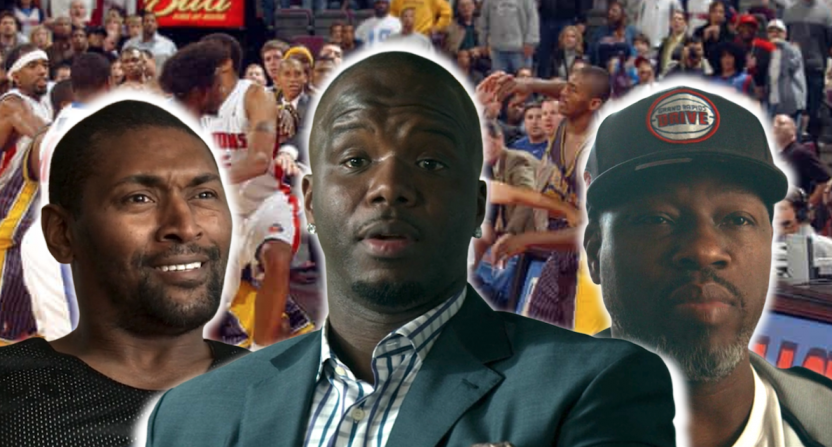 Untold: Malice at the Palace premiered on Netflix this week and Awful Announcing has both a Detroit Pistons fan and Indiana Pacers fan on staff. So we thought it might be fun for the two of them to share their thoughts on the documentary and their memories of Nov. 19, 2004.

Hopefully, tearing that scar tissue wasn’t too traumatic. But writing about it may also have been therapeutic. Or not, if the interviews and footage just revived painful recollections. The conversation begins with initial takeaways after watching Untold.

Ian Casselberry: I was initially surprised at how much of the documentary was from the Pacers’ perspective of the incident. Then again, that’s the “untold” part of the story. We haven’t heard much from the Indiana side, notably from Jermaine O’Neal. As a Pistons fan, I have definite feelings on the brawl and take my team’s side. But I appreciated hearing from O’Neal, Reggie Miller, Metta World Peace (Ron Artest), and Stephen Jackson.

I’ve always marveled at how quickly that Pacers team, which the doc rightfully says was an NBA title contender, became irrelevant. Yet in the 16 years since, I’d forgotten about the significant suspensions the league handed out and how David Stern’s concerns about the NBA’s image fueled those penalties. What I found particularly revelatory was how divisive and disruptive the brawl was for the Pacers afterward.

Jay Rigdon: Yeah, it’s impossible to really understate how much that moment changed franchise history. Indiana had to blow up the team, and couldn’t hope to recoup value or fit. It wasted Jermaine O’Neal’s prime and meant Reggie Miller went out very quietly.

The one thing that did surprise me: the relative lack of focus on the team’s Eastern Conference Finals war the prior year. That kind of setup and context could have really added a lot to how things unfolded at the brawl, including why the fans were so, uh, incensed during an early November game. Maybe that’s the kind of thing that could get worked in if the film had gone another thirty or forty minutes.

The lack of Detroit participation is also interesting, although Ben Wallace was a welcome presence, meaning all four suspended players were able to tell their story on camera, which they didn’t get to do in the aftermath. Considering the premise of Untold, and how this specific film was making the point to show all the various (and mostly white) talking heads taking shots at the suspended “thugs,” putting the focus on those four players makes sense.

Ian, were you watching this game live? If so, do you remember your reaction?

IC: Yes, I was home from school for Thanksgiving break (which goes a full week at Iowa), which always makes me think that this happened the Wednesday before Thanksgiving. But as mentioned in the doc, it was a Friday night, I was already back home in Ann Arbor, and my parents were both out. Pacers-Pistons was a big game — coming off the East finals, as you said — so I planned my evening around it.

But Untold reminded me that the Pacers were blowing the Pistons out. (If you’d asked me, I would’ve said Detroit won.) So I wasn’t paying full attention when I noticed Ben Wallace shove Ron Artest. I first thought, “Here we go. Everyone’s gonna call the Pistons thugs again.” Then that cup hit Artest and the whole situation ignited. I was in disbelief as it kept escalating and fans got involved. I was online long into the night.

JR: It’s funny, I was watching it too, but I was a senior in high school. I remember I went to see our football team win their semistate game to go to the state finals for the first time in 20 years (go Wawasee), which was maybe one of the best, purest moments of sports fandom I can remember, for a variety of reasons.

Then I came home and watched this game instead of going to any of the many parties I’m sure were happening for kids who weren’t sports nerds, and my uncle was staying with us as my parents were on a trip. Uncle Bill was sound asleep by the time the brawl happened, and I didn’t want to wake him up; that I watched the whole thing in stunned silence without shouting remains a miracle. He couldn’t believe it the next day, either, once he saw the highlights, telling me I should have just woken him up to see it happening. Definitely got both ends of the fan spectrum.

IC: Jay, what was your take on all the Artest stuff? It always struck me how he was expressionless during the entire melee and that confirmed to me that something wasn’t right with him. (I’m sure I used much stronger language back then.) Artest has been candid about suffering from depression and anxiety over the past 10 years, but maybe this is the first time some will see him say so publicly.

I kept thinking that the poor guy grew up in the wrong era. How much more concern would people have about his condition and behavior now? Would his teammates have understood more? Would the Pacers have let him take a break, as the Bulls did with Dennis Rodman in 1998? Artest is not a sympathetic figure, yet I felt bad for the guy.

JR: Yeah, I thought that was fascinating. Mental health issues are absolutely a real thing, and clearly he was attempting to treat it and deal with it at the time. The world was a much, much different place back then, and he was also more important to a Pacers team that was trying to guarantee home court advantage (so, for example, they wouldn’t have to play a game 7 in Detroit) than Rodman was to those Bulls in the regular season.

And it’s definitely clear that his depression and anxiety were present often, and influenced how fans and observers viewed him. The one thing he’s clear on throughout Untold, though, is how on the court was where things made sense, and it was his on-court decision (at Jamaal Tinsley’s urging, and Tinsley being exposed after nearly two decades as the secret instigator is an underrated moment) to take a pointless hard foul on Ben Wallace set everything in motion. Obviously, Wallace escalated things after that, and then the fan throwing the beverage was the final spark.

IC: OK, final thoughts. One shortcoming was not including any insight from the media on hand. Sure, reporters and columnists said their piece in print and on TV. And the media is certainly criticized for how it reacted. But first-hand perspective from the Detroit and Indiana sides, more than 15 years removed from the incident, could have added more depth.

The doc did change some of my feelings on the matter. Even as a Pistons fan, I felt that Wallace started the brawl by shoving Artest, even if in response to a hard foul. But as you pointed out, what’s revealed about Jamaal Tinsley egging Artest on has to be considered.

I’ve always thought John Green and Charlie Haddad were morons who crossed a clear line and loved all the publicity they received. Both come across as even bigger assholes here. Yet virtually no one at the Palace during that havoc looks good. The beer tossing, the chair-throwing (!), the short-handed security, the cop ready to mace Artest.

But I really did feel bad for O’Neal and Miller, the Pacers being portrayed as the bad guys over the past 17 years, and the overall opportunity lost for that team.

JR: Certainly having some voices from the media present could have helped flesh out the story a bit more, although I suppose the argument against that would be that the central theme is getting the player perspective alone, with the media having had their chance to tell the story for a long time now. And, yeah, it was a dumb decision to take a foul there, BUT I will still say that it wasn’t really that hard of a foul, all things considered, and Wallace absolutely overreacted to it. Game 6 of the prior year’s series ended 69-65, after all, so contact like that can’t have been rare.

The fans involved really do not come across well. It’s wild that Haddad even agreed to be interviewed and still came across as completely without contrition, even expressing his belief that he was somehow wronged by the entire process. (Yeah, like Jermaine O’Neal needs to sucker punch you, dude, come on. When you walk onto the court and try to fight NBA players and somehow can’t see one coming, that’s not a sucker punch, it’s stupidity.) Green, in archival form, comes across exactly as you’d expect someone who would throw a drink at an athlete to come across.)

The story here did nothing to dissuade my long-held opinion that the Pistons should have had to play at least one playoff game that year in front of an empty arena. The fans, in essence, were rewarded for their behavior. Obviously, Artest deserved his suspension, as did Jackson (even if his motives were somewhat more understandable.)

Moreover, though, going beyond the sporting repercussions to the Pacers and how the media reacted with coded and not-coded language: watching all the fans rush over to dump food and drinks and hurl more objects at players as they exited the tunnel is a pretty scary example of how quickly a crowd can turn from “having a good time” to “gross and dangerous behavior”, and how people feel a lot safer doing shitty things when others around them are all partaking as well.

(Also the Pacers would have won the championship that year.)

Untold: Malice at the Palace is currently available for streaming on Netflix.