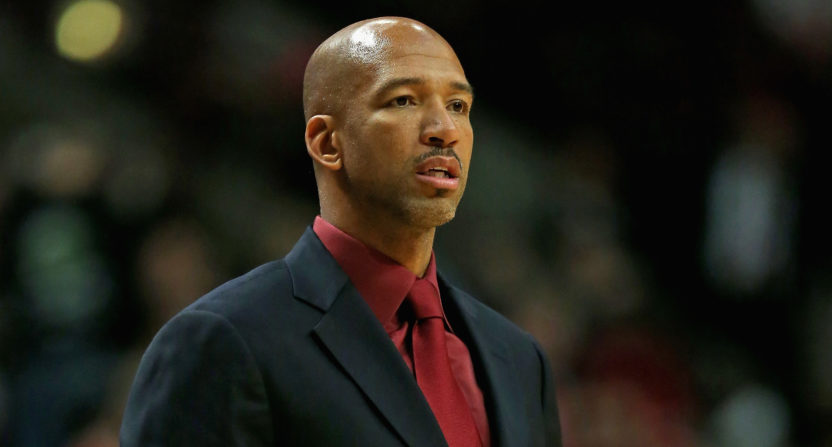 Suns head coach Monty Williams had nothing but praise for LeBron James despite the four-time NBA champion losing to his Phoenix team on Tuesday night.

The Suns dispatched the Los Angeles Lakers 108-90 at the Staples Center, with guard Devin Booker scoring 24 points on his first outing back after missing several games with a hamstring injury.

King James scored 34 points while Russell Westbrook chipped in with 22. Their efforts weren’t enough to secure a much-needed victory for the home team, however.

James, who has been in the NBA since 2003, is finally showing signs of wear but he remains among the top players in the game and there’s little doubt he could play at least a few more years. Apart from his incredible talent, LeBron is admired for his longevity.

Williams, who claimed to have heard about the Lakers star when he was in the eighth or ninth grade, branded LBJ the greatest athlete he’s ever seen. Monty’s Suns and LeBron’s Lakers have developed a bit of a rivalry in the Western Conference but that hasn’t affected the respect the Phoenix coach has for the four-time league MVP.

“Can’t put into words what that guy has been able to do for as long as he has been able to do it. I’m not just talking about the pros,” the coach told reporters after the win. “I heard about him when he was in the 8-9th grade. He has been able to play at such a ridiculous level with that kind of pressure for almost 30 years. Probably the greatest athlete I’ve ever seen. Now he is in his 19th year dealing with all the injuries and stuff they’ve dealt with and still playing at an extremely high level. Never seen anything like that.”

The Suns will continue to provide stern opposition to the Lakers and have already gotten the best of them this season. Arizona sports betting will have them favored for future matchups.

The Lakers will be keen on exacting revenge the next time the two teams face off. They are currently without Anthony Davis and will hope to have him back fully fit by the time they play Phoenix again in March.

LeBron lamented his team’s being short-handed following the game with claims Phoenix is at full strength while his team isn’t.

The Lakers aren’t getting a whole lot right at the moment. They experienced a positive spell last week, winning three games on the bounce for the first time this season but they’ve incurred their third straight loss this week.

Things certainly aren’t going the way the organization envisaged when they brought Westbrook and Carmelo Anthony in during the summer. While Anthony has been a breath of fresh air, Westbrook’s name is already coming up in trade rumors.

Speaking after Tuesday’s loss to the Suns, James noted there were good moments during the contest but rued the Lakers allowing Phoenix the advantage in key moments.

He admitted that it’s hard to see where the Lakers are as a team given that they’re missing a huge part of both their offense and defense in Davis.

Davis tore an MCL last week and the initial prognosis requires him to be re-evaluated after four weeks. There’s really no telling how long he will be out for at this point. The Lakers have more injury issues; Kendrick Nunn, who was signed in the summer, has not been able to make a single appearance so far this term while other players remain out.

Of course, any team with LeBron, Russ, and a resurgent Melo under employ should be capable of presenting a significant threat. The Lakers have not been able to do that just yet and are seventh in the West with a 16-16 record. They could find themselves struggling to make the playoffs or faced with a play-in situation again if they don’t find a solution quickly enough.

Phoenix, on the other hand, looks primed to return to the NBA finals. They currently lead the Western Conference and boast the best record in the NBA. They will be hoping to get over the disappointment of getting to within two wins of a championship but failing to put the Milwaukee Bucks away.