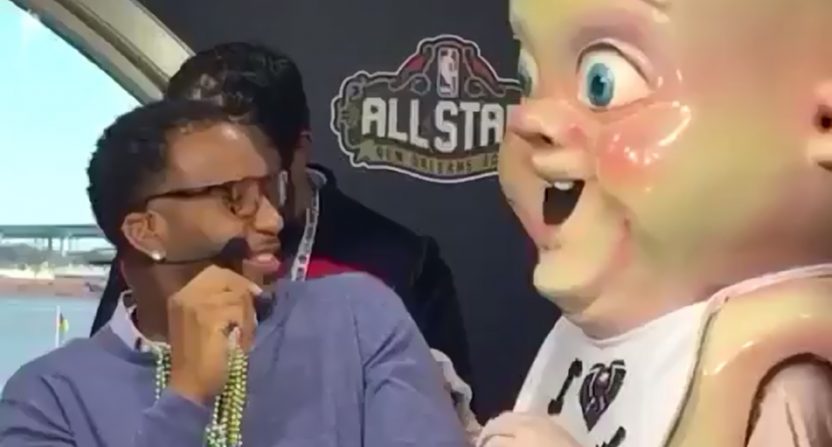 King Cake Baby is one of the creepiest mascots in sports, but the New Orleans Pelicans aren’t getting rid of it just yet. With the NBA All-Star Game in the Crescent City this weekend, King Cake Baby is making the rounds. On Thursday, the extremely terrifying mascot visited ESPN’s The Jump set in New Orleans and gave analyst Tracy McGrady a scare up close.

I mean, King Cake Baby was really up close and personal with T-Mac. Look.

T-Mac is all of us when meeting King Cake Baby pic.twitter.com/dVHhnqkCY8

It's been a good ride everyone pic.twitter.com/So8ejkmipM

But not everyone was creeped out:

Bout to crash #TheJump and bug the crap out of @Rachel__Nichols…also make out with this guy. pic.twitter.com/AP1kcAC21a

McGrady and King Cake Baby did pose for a picture later on:

Still, that’s one of the most bizarre faces on a mascot. And you’ll likely see it quite a bit during All-Star Weekend. You have been warned.