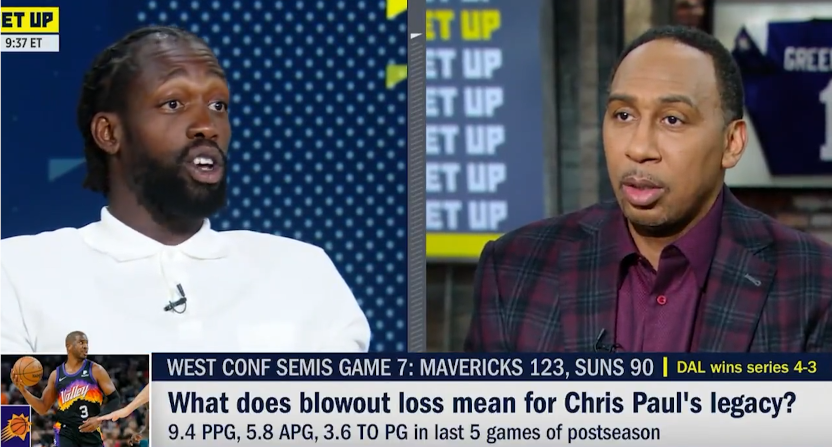 We’ve seen one NBA TV partner make a significant amount of waves with highly critical analysis from an active player (Turner with Draymond Green), and now the league’s other national TV partner is making headlines for comments from an active player. That would be ESPN, which featured Minnesota Timberwolves’ guard Patrick Beverley on Mike Greenberg’s Morning Hot Take Parade (otherwise known as Get Up) and First Take Monday. And Beverley spent much of that time just jumping all over the Phoenix Suns (who lost Game 7 of their series against the Dallas Mavericks 123-90 Sunday night) and guard Chris Paul in particular. Here’s some of that:

"They benched the wrong person. They should've benched Chris."

“CP can’t guard nobody man. Everybody in the NBA know that. … He’s a cone. … Give him the Ben Simmons slander.”

"No one is scared of Phoenix, man. [The Timberwolves] wanted them. I talked to [Paul George] last night, ain't no one scared of them." – @patbev21 pic.twitter.com/juPXGi2KQ9

But if i'm playing Steph Curry tomorrow, i'm going to bed at 8 o'clock. Telling my girl not to call me!"

There are a few things that are notable about these comments from Beverley. For one, this feels like stronger criticism against an active player than anything Green has said on air to date (many of Green’s most pointed rants have been about his grievances with various media). For another thing, the shots at Paul in particular are interesting given Paul’s record (12 All-Star selections, including this year, four All-NBA first team selections, a pick to the NBA 75th anniversary team) versus Beverley’s (he’s never made an All-Star team, and his best career award is probably his 2017 selection to the all-defensive first team).

That doesn’t mean analysts can’t say the 37-year-old Paul is ineffective now (and he certainly was Sunday, posting just 10 points and four assists in 31 minutes before leaving with an injury), and it doesn’t mean that a similar playing career (or any kind of playing career) is required to criticize a great player, but it’s certainly unusual to see an active player go in this hard on someone so prominent. However, there’s a lot of history between Beverley and Paul, as Beverley told J.J. Redick (in March, on Redick’s Old Man and the Three podcast) that he battled Paul even before he got to the NBA, with Beverley calling Paul “a dirty motherf***er” there as well:

“You know Chris,” Beverley started. “People don’t understand, me and Chris, what we have has been going on since I was in high school. I see a lot of people don’t know the backstory but me and Chirs we clearly understand the backstory.

“So I got invited into a LeBron James camp. You know, the big Nike LeBron James camp when we was in college. … You on a certain team, you get to play against LeBron. I think OJ Mayo was there. Chris Paul was there. I killed them. Destroyed them in front of every f—-n’ NBA scout out there. I’m a sophomore in f—-n’ college I’m going at them every f—-n’ play, I’m calling them a child. And then I see him in the NBA. So of course the energy’s gonna roll over to the NBA.”

…“Chris he done slick s–t. People don’t know that’s a little dirty motherf—-r, man. Chris know that too, man. I know you don’t want to say but I’ll say it for you, though. I know he was your teammate.”

It should be noted that Beverley’s “destroyed them in front of every f—n’ NBA scout out there” did not translate into immediate NBA success for him. He was only selected 42nd overall (by the Los Angeles Lakers) in the 2009 draft, traded to the Miami Heat, didn’t make the team, spent four further years in Europe (he’d already played the 2008-09 season there after academic eligibility issues at Arkansas), and didn’t come to the NBA until signing with the Houston Rockets as a free agent in January 2013. So his path to a NBA career was much more winding than the one travelled by Paul, who shone at Wake Forest, was the fourth overall pick in the 2005 draft by the then-New Orleans Hornets, and has been in the NBA since.

Beverley’s grudge against Paul has spilled over onto the court at times as well. In particular, Beverley (then with the Los Angeles Clippers) shoved Paul from behind in a playoff series last year and picked up an ejection and a one-game suspension as a result. Of course, Paul is far from the only player Beverley has had verbal or physical clashes with: we’ve also seen that with Dennis Smith Jr.,  Russell Westbrook, Lonzo Ball, Gary Trent Jr., and more. And we’ve seen Beverley being combative with the media before too, including roasting Will Cain on Twitter and then calling into his show and feuding with Jemele Hill and Michael Smith.

Thus, ESPN likely knew exactly what they were getting from Beverley, especially with booking him for multiple debate shows immediately after a game seven featuring the Suns and his longstanding adversary Paul. And this probably worked out fine for them, with Beverley’s outspoken remarks getting these debate shows much more attention on Twitter than they normally draw. And it seems quite possible we’ll see more of this from him; they announced Monday he’ll be back on their morning shows Tuesday, and he also joined ESPN’s NBA Today for two days last week (he was available thanks to the Timberwolves losing in six games to the Memphis Grizzlies in the first round of this year’s playoffs). So if Patrick Beverley ripping other NBA players on television is your thing, there’s likely more of it in store down the road. (What might be more interesting but less likely to happen, though, is if we got Paul showing up on these same shows to roast Beverley back.)