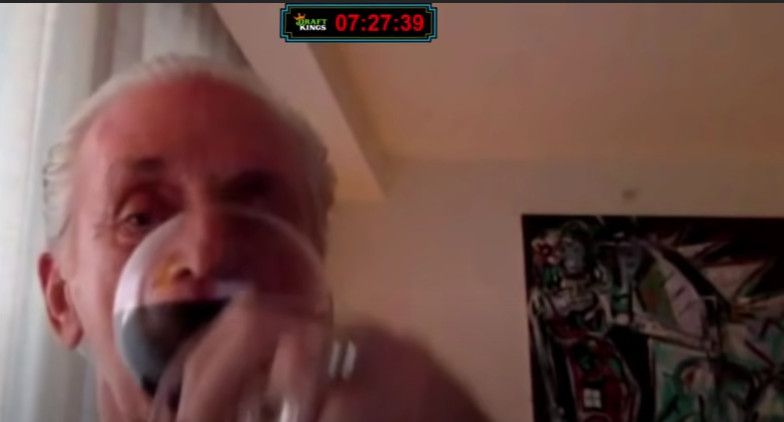 The NBA’s concept of fines for tampering (generally, prohibiting team employees from GMs to coaches to players from trying to get under-contract players elsewhere to agree to join them) makes some sense. But their implementation of the tampering rule is often quite funny, and it often leads to people getting fined for all sorts of strange reasons. The latest there is Miami Heat president Pat Riley, fined Wednesday for comments made last Friday during an appearance on a live-streaming event from Meadowlark Media’s Dan Le Batard and Friends. Riley misinterpreted a question from producer Billy Gil to be about Dwyane Wade, instead made it about LeBron James (who, unlike Wade, is an active player), predicted he’d get fined for his answer, and has now been fined for his answer. Here’s the clip of the full Riley interview; the key question starts around 14:00.

The question from Gil is “Who was responsible for LeBron coming down here? Was it you, or was it Wade? Because I’m hearing both ends of this, Wade’s saying it’s him, you’re saying it’s you, who was it? And follow-up, is the key still under the doormat?” The doormat-key part of that is a reference to the full-page ad the Heat took out when Wade left for the Bulls, which carried a photo of him and the words “We’ll leave a key under the mat for you. Thank you for 13 unforgettable years. Best of luck in Chicago.”

Riley’s response is “Okay, you see this wine here? That’s the worst thing you can do with wine is pour that much into a glass. Unless you’re really desperate. You should only pour like three ounces, there’s about nine ounces in here. I thought it was going to be a nine-ounce interview, and it’s not. It’s a three-ounce interview, and I poured too much. But to answer your question about LeBron, if I was to give you the real, truthful answer I’d probably be excommunicated from the NBA, so that I can’t do. And what was the second part of your question?”

A bunch of the Le Batard staff get in on answering that with “The key under the mat,” and with “Is it under Utah’s mat now?” (with Wade taking an ownership stake there in April). Riley says “I can guarantee you, I don’t believe, I’m trying to think if I left that key under there.” There’s some jokes about “You took it back, change the locks!” and then Riley said “I was never quoted on that. I think that was a Heat thing. To get to the point on that, I know exactly where that quote came from, and it wasn’t from me. I would leave the key under the doormat if he would call me and let me know he was coming, I would do that, but I doubt very much…that key is rusted now.”

“LeBron, he’s one of the greatest of all time, and for four years down here if we we want to just go back and remember what those four years were like, four years in the Finals, four years of excitement, four years of writing, two world championships, you know the LeBron, Chris Bosh, Dwyane Wade, Ray Allen, Shane Battier, Udonis [Haslem], all of them. It was the best time for the Heat. So I wish him nothing but the best, and if he ever did want to come back, I’ll put a new shiny key under that mat. I can’t…I just got…this will get me fined for tampering.”

Le Batard then explains that the question was actually about Wade, and Riley says “Well, I didn’t hear that part of it! You’ve got to make it a two-part question. The key under the mat, Dwyane will always have a key under the mat. It’s there, in gold, in this city. So forgive me, I thought he was talking about LeBron.”

Yes, that’s an obvious tampering fine for those comments about LeBron. The league’s made it quite clear that commenting on under-contract players elsewhere will draw a fine, even if it’s for an obvious statement like “Of course we’d want LeBron if he wanted to be here,” which is pretty much the sum of what Riley said. But it’s quite funny that a question from a Le Batard staffer in the middle of a wine interview that wasn’t even about an active player led to this particular fine. And that fits in with the odd history of tampering fines, which have included fines for publicly requesting a trade (and not even to a specific team), automated tweets, and comments made during an on-air guest analyst stint (thoroughly deserved in that case, however).

The construction of the NBA’s tampering approach has some merit. Taking out all anti-tampering prohibitions would likely be a mess, with everything from press conferences to Tweets, Instagram posts and gaming streams turning into forums for open recruitment of opposing players. Of course, there’s still recruitment that happens of under-contract players, but the anti-tampering rules mean that it’s more subtle and usually not in public view. And given how focused on “who will go where?” much of the talk around the NBA already is, it seems like that would get worse without tampering rules.

It also seemingly makes sense to just make the rule hard and fast so there’s no need to spend a lot of time debating just what’s accepted. It’s obvious when something’s out of bounds here, as even Riley realized after his initial comments. And there is still some potential discretion baked in; Riley’s fine is lower than the $50,000 for Draymond Green’s on-air attempt to recruit Devin Booker. But it is interesting how much the anti-tampering provisions can limit NBA figures in what they can say. And while Riley can afford a $25,000 fine, it’s certainly notable to see him get one for answering a Le Batard and Friends question about the wrong guy.

[The South Florida Sun-Sentinel; Le Batard and Friends on YouTube]