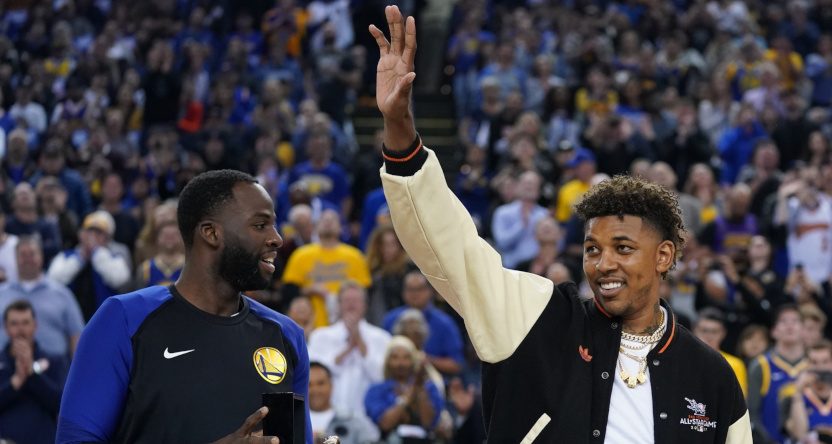 Last week, Spotify and Uninterrupted launched a new podcast, Certified Buckets. The podcast is hosted by former NBA player Nick Young, WNBA star and ESPN analyst Chiney Ogwumike, and actor Sarunas Jackson, and it includes a special guest each week, plus “hot takes, behind-the-scenes stories, and recaps of the latest in NBA culture.” Young (seen at right above in April receiving his 2018 NBA championship ring from Draymond Green) recently spoke to AA by e-mail about how he got involved with this and what he hopes to accomplish with it, saying that his interest in podcasting was first sparked by Gilbert Arenas.

“After putting on Gil’s podcast, I wanted to try my own. I tweet and say a lot of crazy stuff so I think it’d be interesting to have it all on a podcast. To be able to talk about basketball, culture, and fashion is what I’m all about. I loved working with Spotify and Uninterrupted in the past, so when this opportunity came around I was excited.”

Young said that working with Ogwumike and Jackson gives the podcast a variety of perspectives, and the hosts were able to quickly find chemistry.

“The three of us bring something different. Sarunas is a ladies man. He’s on Insecure and he played basketball overseas. Chiney has been on ESPN and brings that woman’s perspective. We all merge into something that is cool. After a couple test runs, we all got comfortable with each other.”

He said the podcast’s going to go into more than just on-the-court topics.

The first episode’s available here. And it’s an interesting new arena for Young, who played in the NBA from 2007-18 with the Washington Wizards, the Los Angeles Clippers, the Philadelphia 76ers, the Los Angeles Lakers, the Golden State Warriors, and the Denver Nuggets. Young said winning the 2018 title with Golden State was particularly memorable for him, as it was the first championship he won; he’s since followed that up with a Drew League title this summer.

“I’d say winning the championship with Golden State. That birthed the Swag Champ. I’ve never been a champion before that. Since then, I won the Drew.”

Young’s become known for his “Swaggy P” nickname, and he said he appreciates how big that’s gotten.

“I knew it was going to blow up because God gave it to me. It was heaven sent. Swaggy P has been nothing but good for me. It’s authentic and true to who I am. The people love it.”

When asked why people should check out Certified Buckets, Young had this to say:

“Because of me, haha. What other podcast has Swaggy P hosting? In all seriousness, we bring something different to the table. Chiney with the WNBA perspective, Sarunas from the entertainment side, and obviously me. I’ll definitely be dropping some unheard stories, so go follow Certified Buckets on Spotify and tune in.”

Certified Buckets can be found on Spotify here. New episodes release each Friday.