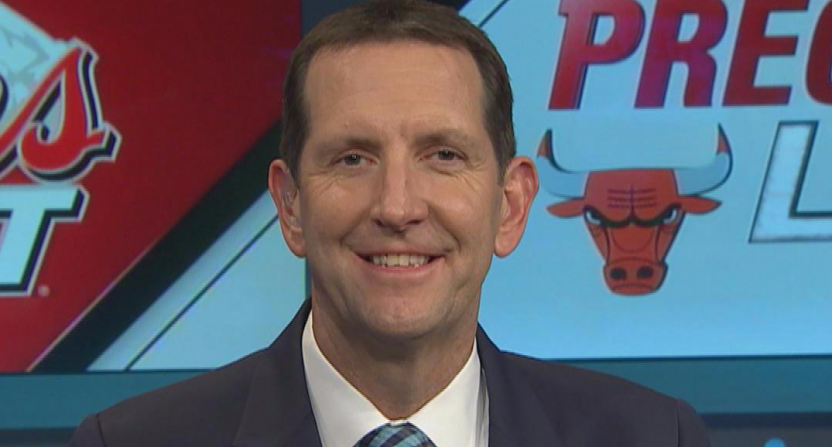 Now that the NBA playoffs are in full swing, Awful Announcing caught up with four-time champion Will Perdue, who won three titles with the Chicago Bulls and another with the San Antonio Spurs.  This past weekend was the 30th anniversary of the first Bulls championship.

Perdue is an NBA analyst for NBC Sports Chicago and a college basketball analyst for Westwood One Sports.

In the playoffs, what has stuck out to you?

“A lot of times a team just jumps out at you, and you think: they’re the favorite, they’re so much better than everyone else. I haven’t really seen that. Yes, I know there were a lot of (short series) in the first round. But there were still some competitive, drama-filled games. I think the league is in a very good place.”

What did you think of Billy Donovan’s first season as Bulls coach?

“(Previously), one thing that was constantly discussed was the lack of player development. I think everybody saw that development this year with the (new) coaching staff. Now there’s still a long way to go. The hard part is trying to be patient, because I still think we’re looking at a four or five-year window for this team to become a contender.”

Many people thought Donovan and Brad Stevens would return to college. Are you surprised both are still in the NBA?

“No. Recruiting is exhausting. You can’t get away from it. It’s just a constant process that requires so much time and effort. In the NBA, they don’t have to worry about that. You’re not constantly sending text messages or making phone calls to recruits, to their parents. The NBA is just basketball.”

Is there a major difference between your era and players today?

“The players are better shooters and scorers. Not necessarily better players, but better scorers than the 80s and the 90s. K.D., Steph, Harden. The ability of these guys to score in so many different ways too. That’s impressive. In some of these games, the defense has been halfway decent, but these guys are just so good on the offensive end. It’s a nightmare trying to slow these guys down.”

How difficult was it buying clothes when you were young?

“It was nearly impossible. I used to wear capris before they were cool. That’s because I was growing so much. My parents would get mad. They would buy a pair of pants. I would wear them two or three times and that was it.

“Now the turnover on all that is pretty quick. There are plenty of companies. I can order a pair of jeans, slacks, shorts, and they’ll be here in three days.”

Were you always comfortable with your height?

“Early on I wasn’t comfortable with it at all. Partly because of my height, but also because of how skinny I was. I wouldn’t say I had an image problem, but I looked kind of out of place. I was gangly. I was so much taller than everyone else. I didn’t get comfortable until college. That’s also when I started to fill out and developed some muscle.”

Phil Jackson famously gave out books to players. What books did he give you?

“The two books that stand out are The Great Santini and Zorba the Greek.

“The Great Santini was very enjoyable. (It was about) a military father and his son who happened to play basketball. Felt like Phil thought that was him and I.

“(With) Zorba the Greek, the moral of the story was dealing with adversity because he got his finger cut off, right? Phil and I always butted heads. He was a huge Wes Unseld guy. That was his definition of a center: big, burly, broad shoulders. I was big. but I was slender. I always felt like he was trying to replace me, and eventually they brought in Luc Longley who was much bigger.”

There were a few times that Michael Jordan punched teammates during competitive practices, including you. Do you have a Jordan memory you haven’t told people about?

“I used to have basketball camps every summer. One in Merritt Island, Florida where I grew up, and one in Nashville where I played at Vanderbilt. Instead of giving out trophies, I would give out shoes. And to the MVPs, I gave out autographed game-worn Michael Jordan shoes. Michael would always give you an autograph. Now, depending on what day it was, he may give you a hard time. But then he would test you: how many times are you willing to ask? He would have fun with it.

“The first couple of years he would say, ‘How about you just buy them? I’ll bring you a pair. I’ll autograph them.’ I said, ‘It’s not the same. These are game-worn. You don’t understand how big of a deal this is for the kids.’ He knew, but he would literally make you beg.”

“To this day, I’ll run into somebody, and they’ll say, ‘You don’t remember me, but I was MVP of the camp in 1992. I still have those Michael Jordan shoes and I’ve given them to my son or daughter.’ To me, that’s kind of cool. When you think about it, they could probably sell them for a lot of money.”

Who was the toughest player to guard?

“One guy who was amazing was Hakeem Olajuwon. His footwork was so good. You could watch all the film you want, but you just couldn’t (stop him). You felt like you were at his mercy. He could make you look really bad. He never talked trash. He just played. You would get mad at yourself more than him.”

Who talked a lot of trash?

“A lot of times it was guys I didn’t necessarily guard, but played against a lot. Larry Bird would say, ‘Coach, you’re putting this guy on me? This is embarrassing. You think that guy can guard me?’”

Have you thought about coaching?

“I think about it all the time. I have a son who is 17. He plays lacrosse and is going to be a senior. I want the flexibility to see his games. Next year when he goes off to college, that could be a different story. He’s trying to decide if he’s going to play in college. He’s a late bloomer; 6’7″, 220 pounds. I coached him (in basketball) in grade school, but he didn’t necessarily love it. He fell into lacrosse and that’s what he loves the most.”