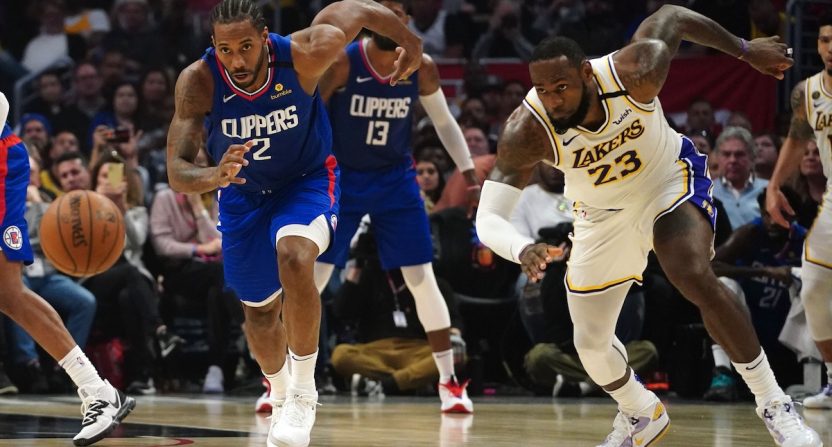 NBA training camps for the 2020-21 season opened up on Dec. 1. For the eight teams that didn’t play in the league’s Orlando bubble, it’s been eight months since they’ve seen any action.

But for the other 24 teams that either finished off the 2019-20 regular season in Orlando or participated in the playoffs, the offseason has been short. It hasn’t even been two months since the Los Angeles Lakers won the 2020 NBA Championship.

That will likely make load management a frequent topic during the 72-game regular season. Giving players (especially those who have previously dealt with chronic and serious injuries) more games off has been a point of contention among fans who don’t get to watch stars they bought a ticket to see, media who might not get to cover those players, and the TV networks faced with broadcasting games without the NBA’s biggest names.

Such little time for players like 36-year-old LeBron James to recuperate compelled Los Angeles Times columnist Bill Plaschke to suggest that the Lakers “bench” the 36-year-old LeBron during the season, resting him once a week, for a couple of two-week stretches, or up to 20 games to reduce wear and tear.

I asked LeBron what his response was to hearing Dec. 22 – “Oh shit,” he said.

But if the Lakers plan on resting LeBron and other teams intend to follow suit (such as the Los Angeles Clippers sitting Kawhi Leonard for back-to-back games) the NBA wants to make sure that this doesn’t happen when those star players are set to appear on nationally televised games.

According to Yahoo! Sports’ Chris Haynes, the league will issue fines of at least $100,000 to teams believed to be resting healthy players for national telecasts and high-profile matchups.

Yahoo Sources: NBA implementing new resting policy for 2020-21 season with teams prohibited from resting healthy players for any high-profile, nationally-televised game and violation could result in a fine of at least $100,000.

Haynes went on to report that the NBA’s new policy will continue to insist teams not rest multiple healthy players for the same game and not to rest healthy players for road games (thus depriving local fans of seeing visiting stars). But if such a player is being rested, he should be visible to fans, presumably sitting on the bench.

The immediate thought is that $100,000 might not be enough of a deterrent for teams who think it’s worth resting a player to keep him fresher for the playoffs. But with fewer fans allowed into NBA arenas for games this season (some may not allow any, depending on local ordinances), perhaps teams will be hesitant to pay that amount multiple times.

Sources: The NBA aims to have arena suites open to fans at 25-to-50 percent capacity for 2020-21 season tipoff, based on local regulations. An amount of fans — under protocols such as masks, social distancing and coronavirus testing — is a goal to start season.

Lack of revenues during the pandemic is enough of a concern that the league is giving each of its teams $30 million (totaling $900 million) as a safeguard, reports Sports Business Journal.

Plenty of NBA teams and coaches could dodge fines and penalties by claiming players are injured, not just resting. The league already has protocols requiring teams to show documentation of exams and treatments administered by team medical staff that revealed injuries.

Yet the Clippers claimed an injury with Leonard last season, sitting him out with a supposed knee injury before a game against the Milwaukee Bucks and a marquee matchup with Giannis Antetokounmpo. But then-coach Doc Rivers said afterward that Leonard “feels great because of what we’ve been doing,” indicating that he wasn’t injured or was healthy enough to play.

That resulted in the league fining the Clippers $50,000.

For now, the NBA is doing what it can to assure TNT, ESPN, and ABC that LeBron, Giannis, Kawhi, and fellow superstars will be on the court when those networks feature those teams. Viewers can presume that they’ll get to see the top players when they tune in for marquee matchups.

Yet that short offseason could make teams and players willing to pay those fines if it means getting some crucial rest and preserving them for more important postseason competition.