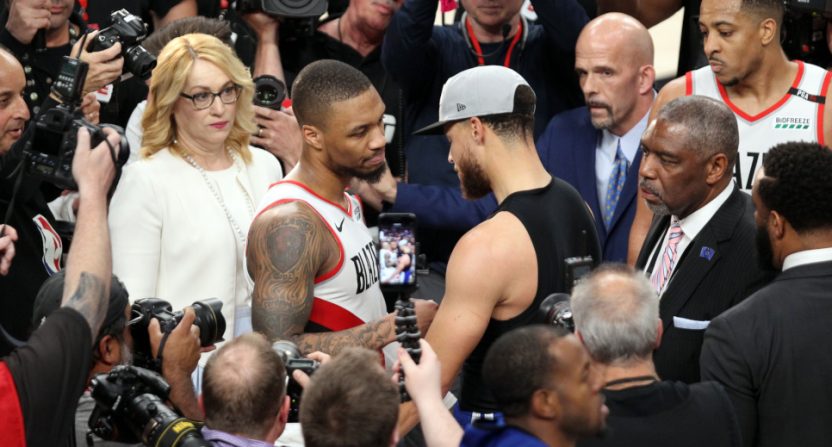 Heading into the NBA’s conference finals, things looked pretty dire from a market standpoint. The Eastern Conference Final saw Milwaukee (the 36th-largest U.S. local market) facing Toronto (not counted at all in terms of local U.S. viewers), while the Western Conference Final saw Golden State (8th) facing Portland (22nd), a drop-off from last year’s 7-8 matchup with Houston and Golden State. However, while the ECF has generally struggled as predicted (including a 12-year-low in conference final overnight ratings for Game 2), the WCF actually wound up paying ratings dividends for ESPN despite the Warriors’ sweep.The 5.8 overnight metered market rating average for the four games was up 23 percent from the 4.7 overnight rating ESPN/ABC drew in 2017 (the last time they televised the Western Conference Finals) for Warriors-Spurs, which was also a Warriors’ sweep. And that included a 5.9 across ESPN and ESPN2 (counting the alternate broadcast) for Game 4, which was up 40 percent from a 4.2 for Game 4 in 2017.It’s really quite impressive that the Blazers-Warriors series wound up pulling in the ratings it did. Maybe there was some added interest on how Golden State would perform minus Kevin Durant, or some extra national following for Portland after their playoff exploits so far (a five-game win over Oklahoma City in Round 1 with a “bad shot” Damian Lillard dagger, and a seven-game win over Denver in Round 2), or maybe people are even more into today’s Warriors than they were in 2017 or 2018. But regardless of why it happened, that’s certainly a nice ratings outcome for ESPN.(Update: This post initially had some comparisons to the final national numbers from previous conference finals. Overnight ratings don’t properly compare to those, so we’ll discuss those later once they’re out for Game 4.)[ESPN Press Room; Sports Media Watch]