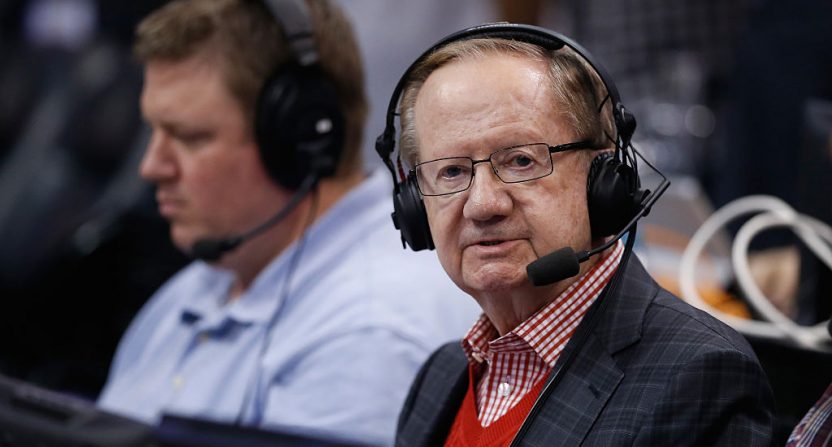 When the NBA was born in 1946, basketball broadcast pioneer Marty Glickman helped the league get off the ground. His electric, rhythmic and graphic play-by-play on radio was an immediate hit. In the 70 years since, Marty and other popular radio announcers contributed mightily to the league’s growth.

For years, fans headed to radio first, whether for Marv Albert’s riveting calls of long ago Knicks’ championships or to Johnny Most for his raucous stamp on umpteen Celtics moments.

What Glickman, Most and Albert did in the east, Chick Hearn did out west. His expressions on radio put flesh on Lakers’ legends. Jerry West laid it in,” like putting a baby in a cradle!” Kareem’s hook shot was a “sky-hook” and Kobe Bryant’s drive “faked his defender to the popcorn machine!” Up the road in the Bay Area, the Warriors’ unrestrained Bill King would bellow eloquently, “These referees are the paragon of ineptitude,”

Hall of Fame broadcaster Joe Tait was inextricably linked with the Cleveland Cavaliers from the Miracle in Richfield in the 1970’s to the promise of LeBron James in the mid 2000’s. “LeBron, to the line, to the lane, wham! – with the right hand.”

WTAM, the Cavs’ 50,000 watt station boomed into some 40 states at night and listeners dialed in from Brooklyn to Denver. Budding broadcasters too, Kevin Harlan among them, took note from afar of Tait’s lingo and style.

All was good. Announcers had adequate vantage points, either on the floor or not too far above it. They used their vibrant lenses to produce vivid and heartfelt descriptions that magically steered listeners’ emotions right into the arena. Radio was part of the NBA fan experience.

NBA radio broadcasters are gradually becoming carpenters without tools. They’re slowly being forced to set up shop in what feels like another zip code. They’re assigned to paint like Picasso – but asked to wear a blindfold. Hall of Famer Tait, working from some of these impossible positions toward the end of his career, would say off-air, “Where we sit, the game is no more than a rumor.”

Seats at courtside, the inner sanctum of the media for generations, have been reassigned to customers willing to shell out a wad of cash for premium seating. 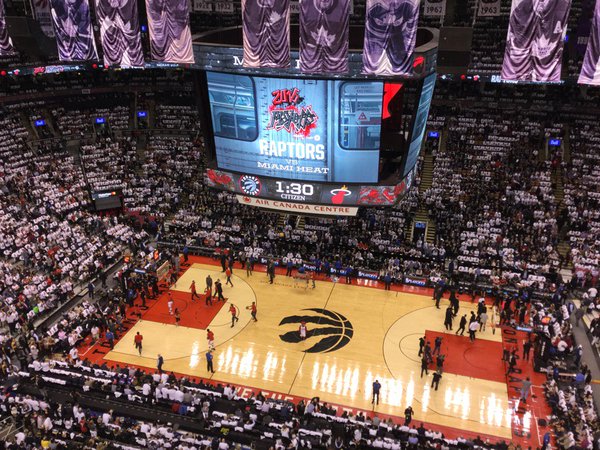 Most teams, not all, have kicked radio crews upstairs. No, not 10 or 15 rows up, rather to the rafters, to the nose-bleeds. Hot Rod Hundley, the celebrated voice of the Utah Jazz, made the switch to radio-only at the end of his career. By 2009, he had enough. The visual strain upstairs was overbearing, so he retired.

In Boston, NBA radio announcers are maddened by their ungodly sightline at the top of the building where one of the court’s corners is obscured. They can’t see whether shots are 3’s or 2’s. In Denver this season, the legendary Suns’ voice, Al McCoy, 83, couldn’t clearly communicate the details of a foul. The ultimate professional, McCoy firmly told his audience, “It’s hard to follow the referees from a mile and a half up, here in Denver.”

The broadcasters have asked their employers to understand their predicament but have been told to stop complaining. Many are dying a death of a thousand cuts. They wonder what radio’s future holds. At times in recent years, ESPN Television didn’t send its talent to events a distant away. Instead, announcers call games from a studio in Bristol. It’s more economical.

In a world of instant gratification, a Smartphone provides access to running box scores, game tweets and of course, video streaming. Still, Adam Silver, the league’s commissioner, known for doing the right thing, should act. Radio is half pregnant, yet still available on satellite, mobile and online around the world.

The league can consider mandating a height boundary for radio announcers, one that’s no further up than the top of the first tier and between the sidelines

For its part, radio administrators can demonstrate a willingness to downsize production. Does radio really need a crew of four; a play-by-play announcer, a color commentator, an engineer and a statistician?

Radio is indisputably a play-by-play announcer’s medium. There’s always been a debate whether color commentators are superfluous. The score, the time remaining and who’s taking the shot are critical. Who missed helping the help, failed to go over on the screen and ran interference are not as critical on radio. For years, Tait, Glcikman, Albert and Most worked alone.

Is there a need for an engineer, when technology today requires no more than plugging a DSL line into a console? It’s as easy as connecting a kitchen blender into an electrical socket. As for statisticians, the NBA’s stat monitor is quicker and more accurate than a human brain. Keeping the crew size down might ease financial and space pressures.

San Antonio, Denver, the Clippers and Philadelphia for example don’t use color commentators. How about allocating two seats for radio at courtside? Larger crews would accept less generous quarters upstairs.

NBA radio announcers live a charmed existence – when they can see the game or – in 2017 if they have Ted Williams’ 20-15 eyesight! Some tweet photos of their broadcast location such as the one included here.

David J. Halberstam, a former radio play-by-play announcer for the Miami Heat, is the author of The Fundamentals of Sports Media and Sponsorship Sales: Developing New Accounts and Sports on New York Radio: A Play-by-Play History