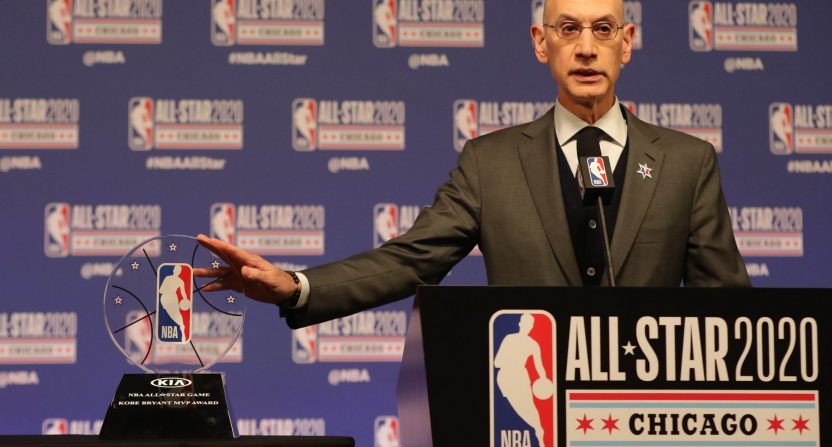 Despite some arenas allowing a small number of fans to be in attendance (with mixed results), the NBA has been and will continue to be a made-for-TV sport this season.

Considering how much the NBA’s All-Star festivities are built around the in-arena experience (which translates to the home audience; a dunk contest is a lot less exciting in an empty gym), not to mention the myriad risks of playing amidst a pandemic, the idea that the league would push forward with an actual exhibition game feels pretty odd.

Yet that’s exactly what the NBA and the NBPA are reportedly planning to do, according to ESPN’s Adrian Wojnarowski:

The NBA and the National Basketball Players Association are progressing toward an agreement for an All-Star Game on March 7 at State Farm Arena in Atlanta, a single-night event that encompasses a game between the Eastern and Western Conferences and skills competitions, sources told ESPN.

While a formal agreement has yet to be finalized, the NBA and NBPA have been working through the details of a scaled-down event that centers on transporting players in and out of Atlanta in a significantly shorter window of time than what would be required on a typical All-Star weekend, sources said. Safety protocols are among the details still being ironed out.

The question that has to be asked: why? What kind of benefit is there for the league to push for this to happen, considering the current situation? There have already been dozens of games postponed this year due to Covid procedures. Bringing players and coaches from a swath of the league all together for one game has the potential for a disaster in terms of contact tracing protocol.

If there's a positive coming out of the ASG they'll have to shut down the entire league. But sure, let's have an All-Star Game. https://t.co/88XawHouxm

And that’s just from the sport perspective alone, not to mention the overall health risks the league is planning on taking here. For what reward? If you’re wondering about television money, that’s not really an issue, as Woj notes:

The raw financial impact of playing the game is immediately unclear. Because the league reduced the regular season by 10 games and doesn’t have a separate All-Star Game television deal, the league also could have generated more revenue by filling the weekend with more regular-season games. The NBA and NBPA share roughly a 50-50 split in basketball-related income.

All-Star Weekend was originally set for Indianapolis, but they’ve now been awarded the 2024 game instead. This version would take place in Atlanta, which Woj notes means Turner Sports could produce without leaving their home city, cutting down on at least some travel.

The question remains: what’s the point? Even the NFL dumped the Pro Bowl game itself this season. Just name the rosters, take a year off, donate money to HBCUs and other initiatives, and give players a full week off at home ahead of what’s sure to be an impossibly cramped second-half schedule. Maybe even just give them a shorter break but use the weekend to play a night of games that have been postponed, to get a jump on that without risking a Covid positive that could derail the entire league calendar.