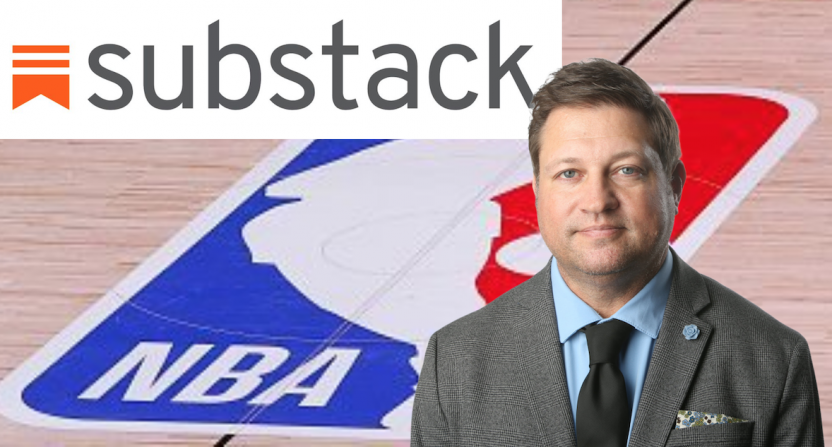 Marc Stein is taking his NBA newsletter from the New York Times to go into business for himself. The veteran pro basketball reporter announced the move Friday afternoon on Twitter, saying he was launching a newsletter at Substack.

This was an irresistible opportunity to cover the league I have tracked for nearly 30 years in a fresh and groundbreaking way via @SubstackInc … thanks to this deliciously blank canvas, total independence and the closest connection possible to you: https://t.co/sZ5Ao4Tn3Q

Stein has been with the NYT since 2017, joining the venerable newspaper months after being laid off by ESPN. He wrote regularly for the Times, reporting NBA news, providing analysis, and often taking a wider view of the league.

But a big part of Stein’s coverage is his weekly newsletter, which has built the following you’d expect from a longtime NBA insider familiar with fans from ESPN and working for a powerful media brand like the New York Times. That’s something he’s obviously now decided he can do on his own — in a rather competitive space — not only providing the newsletter for readers but additional content for paid subscribers.

Interacting with readers is also clearly important to Stein, as he mentioned in his tweet. Stein recently partnered up with social audio app Locker Room to communicate live with fans and comment on news and games more immediately and directly.

“Fans have been calling into radio shows forever, but this is a totally new genre,” Stein told Axios Sports’ Kendall Baker in March. “The host and the audience have never been able to hang out like this without being rushed. I see it as the old ESPN.com chats of yesteryear springing back to life in audio form.”

At the time, it wasn’t clear how the NYT felt about Stein partnering with Locker Room, though the presumption is that his editors had to approve such a move, which would also help promote the paper and website. But perhaps that also gave Stein a bit more taste for independence and showed him what the possibilities and potential audience could be.

Stein has covered the NBA since 1994, first as a Mavericks beat reporter, then NBA columnist for the Dallas Morning News. From there, he covered the Lakers and Clippers for the Los Angeles Daily News. Stein has also written for the San Bernadino Sun, Orange County Register, and Washington Post during his career.

He joined ESPN in 2000, becoming the network’s senior writer and making regular appearances on a variety of NBA-specific programming in addition to SportsCenter and ESPN Radio. Stein also covered soccer for the network. He was laid off in April 2017, shortly before ESPN hired Adrian Wojnarowski as its top NBA insider.